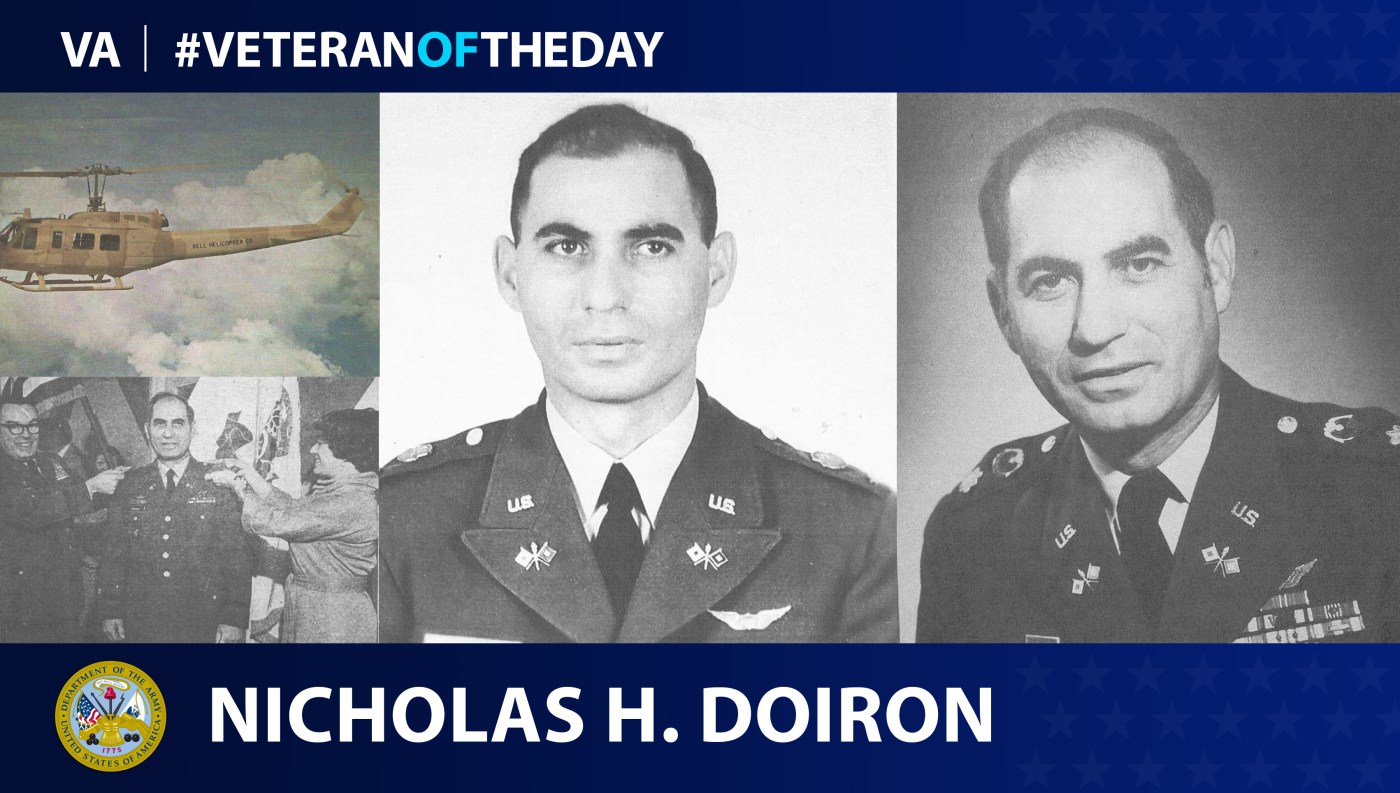 Today’s #VeteranOfTheDay is Army Veteran Nicholas H. Doiron, who served in Vietnam and as a U.S. advisor to the Iranian army.

Nicholas “Nick” H. Doiron graduated from Norwich University in 1955. He commissioned as a second lieutenant with the Army Signal Corps. Doiron went to Fort Monmouth in New Jersey during the fall of the same year. He trained as his unit’s communication officer.

Doiron attended his primary flight training in Texas and graduated as an Army aviator from Fort Rucker in Alabama. He taught at Fort Rucker as a flight instructor for the next three years. His second tour in 1960 led him to Iran as an aviator with the Military Assistance Advisory Group, or MAAG.

In 1965 Doiron returned to Fort Rucker to take part in helicopter transition training to report for an assignment with NATO in France. Later that year, he promoted to a major as the maintenance officer going to Vietnam with the D Troop of Third squadron, Fourth Calvary.

After his time in Vietnam, Doiron returned to Fort Rucker to join the Aviation Test Board. His role was to write test plans then perform flight tests. He also helped test new ground-based navigation systems for use in Vietnam.

He also served at the Pentagon as an action officer for the office of the Army’s chief signal officer. This led to a special project for Doiron to work with the assistant chief of staff for the next year and half.

Now a lieutenant colonel, Doiron tranferred in 1971 as the Army aviation advisor to the Imperial Iranian army. He aided the Shah to modernize their army.

He promoted to colonel in 1977 and transferred to the Army Depot in Sacramento, California, as the new maintenance director. However, this position was brief, as he was requested to lead the Television and Audio Support Activity unit with the Commanding General of the Army Communication Command.

Between 1980 and 1983, Doiron was the commander of a regional signal support regiment for the NATO Allied Forces southern region in Naples, Italy. In his last two years, he was the deputy program manager working with the Saudi Arabia National Guard developing a modern military force.

During his career, Doiron received a Defense Superior Service Medal, a Bronze Star Medal, three Meritorious Service Medals, six Air Medals and an Air Medal with a “V” for valor.

After Doiron retired from the Army in 1985, he took a small break from working but decided to return three years later to help his local community. He worked as a division chief for the Department of General Services and later the purchasing chief for the county of Sacramento, California. Doiron retired again in 1998.

He continues to serve after retirement as a member of the Kings of Columbus branch 4970, which he has been a part of since 1955. Doiron was also a two-time president of the North Sacramento Rotary Club. He remains an active member in both organizations.