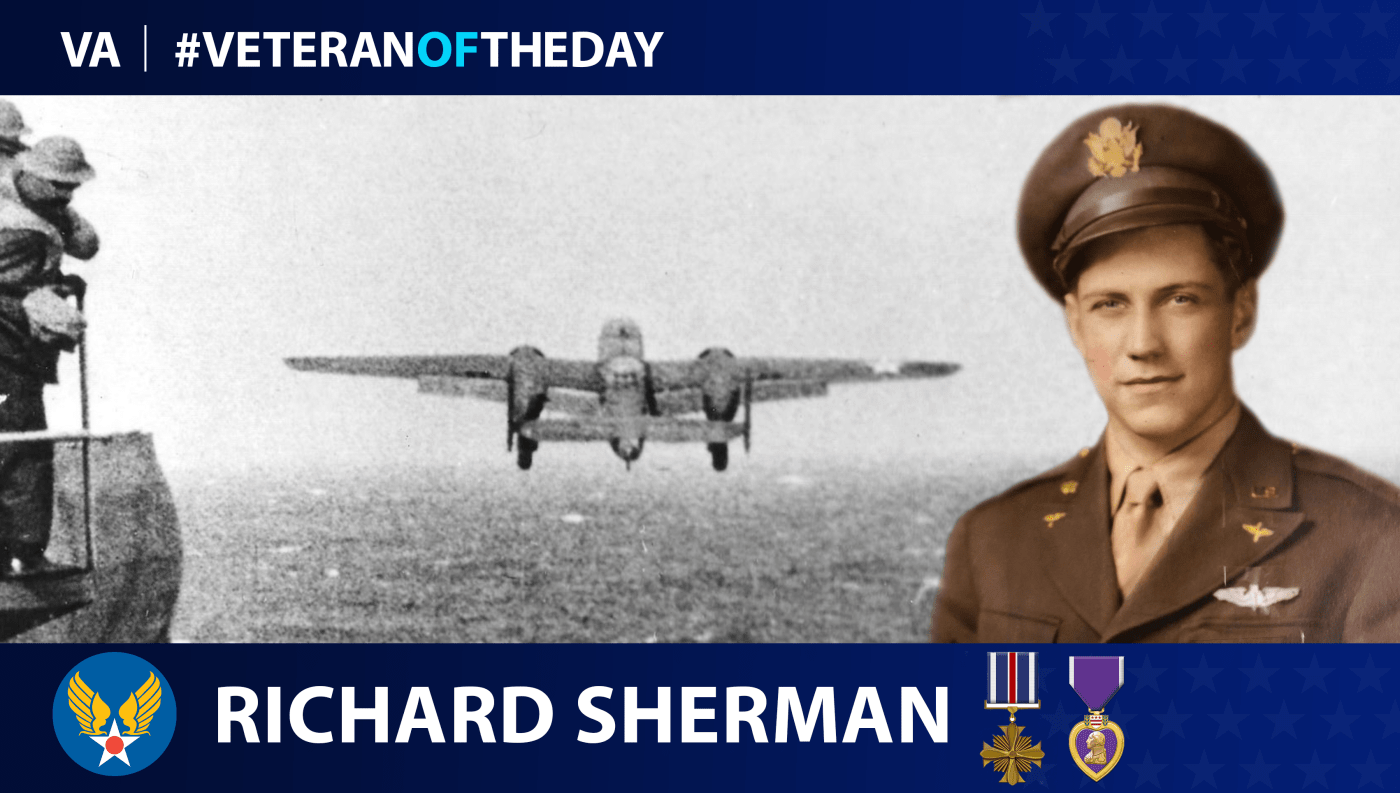 Today’s #VeteranOfTheDay is Army Air Forces Veteran Richard Sherman, who flew a B-25 Mitchell with the Flying Tigers in China during World War II.

Richard Sherman joined the Aviation Cadet Corps in January 1942. After basic training, he attended bombardier school in Santa Ana, California, and in Kirtland Field near Albuquerque, New Mexico. He also trained as a navigator, a secondary role that many bombardiers served. Sherman initially served on Kwajalein Atoll in the Marshall Islands, but later transferred to China. There, he joined the 11th Bomb Squadron of the 14th Air Force, best known for its association with the Flying Tigers.

The Flying Tigers were originally known as the American Volunteer Group (AVG), a group trained by Claire Chennault to assist the Chinese Air Force after the Japanese invasion in 1937. The nickname “Flying Tigers” came from the painted tiger shark teeth on the noses of the group’s aircraft. From December 1941 to July 1942, the AVG destroyed 296 Japanese aircraft in China and Burma.

Unlike most Flying Tigers who flew P-40 Warhawks, Sherman flew missions on a B-25 Mitchell. In February 1944, his plane was shot down over the South China Sea. He and the crew survived the loss but had to be hidden by Chinese civilians and guerillas on their way back to base. Sherman flew 52 missions during his service with the 14th Air Force.

After the war, Sherman returned to the U.S. and settled in Monroe, Louisiana. Sherman later joined the Air Force Reserve. During the Berlin Wall incident, he deployed with the 123rd Aircraft Control and Warning Squadron to Landshut, Germany. There he briefly worked in the automotive section, which managed vehicles and ground transport for the military. Sherman later retired from the military in April 1968 as a major.

During his service, Sherman received numerous medals, including a Distinguished Flying Cross, a Purple Heart and an Air Medal with two oak leaf clusters.

In his retirement, Sherman remained active in the Veteran community. He joined the American Legion, serving as post and district commander, and kept in touch with Chennault and his family. He also was involved in the preservation of Selman Army Airfield in Monroe which had served as a navigation school during World War II. Thanks to Sherman and members of the Chennault family, Selman Army Airfield later became the home of the Chennault Aviation and Military Museum. Sherman donated pieces of his memorabilia from the war and participated in museum events.

In 2015, Sherman and the four other surviving members of the Flying Tigers received gold medals from the Chinese government for their service.

Read more about the Flying Tigers at https://vaww.blogstest.va.gov/VAntage/68944/claire-lee-chennault-flying-tigers/.