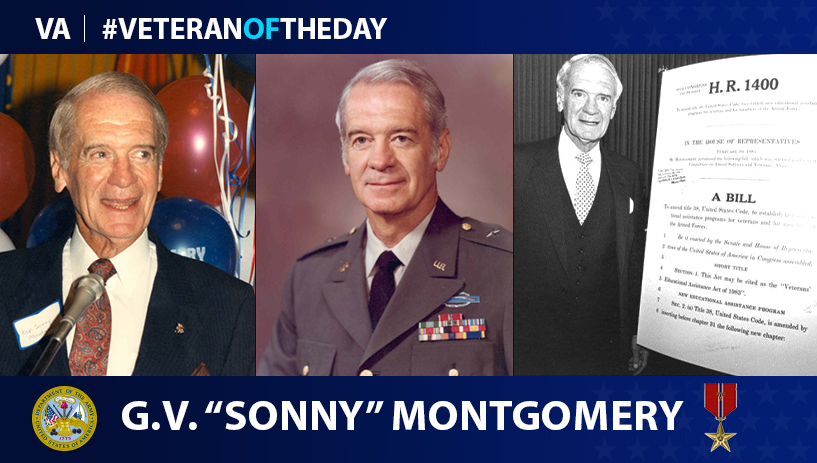 Today’s #VeteranOfTheDay is Army Veteran G.V. “Sonny” Montgomery, who served 30 years in Congress and is the namesake of the Montgomery GI Bill.

Gillespie V. “Sonny” Montgomery served in Army’s 12th Armor Division in World War II, receiving the Bronze Star with “V” device for valor. After the war he joined the Mississippi Army National Guard. Montgomery mobilized with the 31st Infantry Division during the Korean War, ultimately retiring as a major general in 1980.

Montgomery then served in Congress, where he represented his home state for 30 years from 1967-1997. Known as “Mr. Veteran,” he chaired the House Veterans Affairs Committee from 1981-1995.

He championed for two momentous pieces of legislation that improved the lives of every Veteran. The first is the Educational Assistance Act of 1984, better known as the Montgomery GI Bill, which provided educational benefits for a new generation of service members much as the original GI Bill did for World War II Veterans. The second law he is famous for is the Department of Veterans Affairs Act, which he co-authored in 1987 and became law in 1989, elevating the Veterans Administration to a cabinet-level agency, the Department of Veterans Affairs.

In 2004 President George W. Bush awarded Montgomery the Presidential Medal of Freedom, the highest award that the country can bestow upon a civilian.