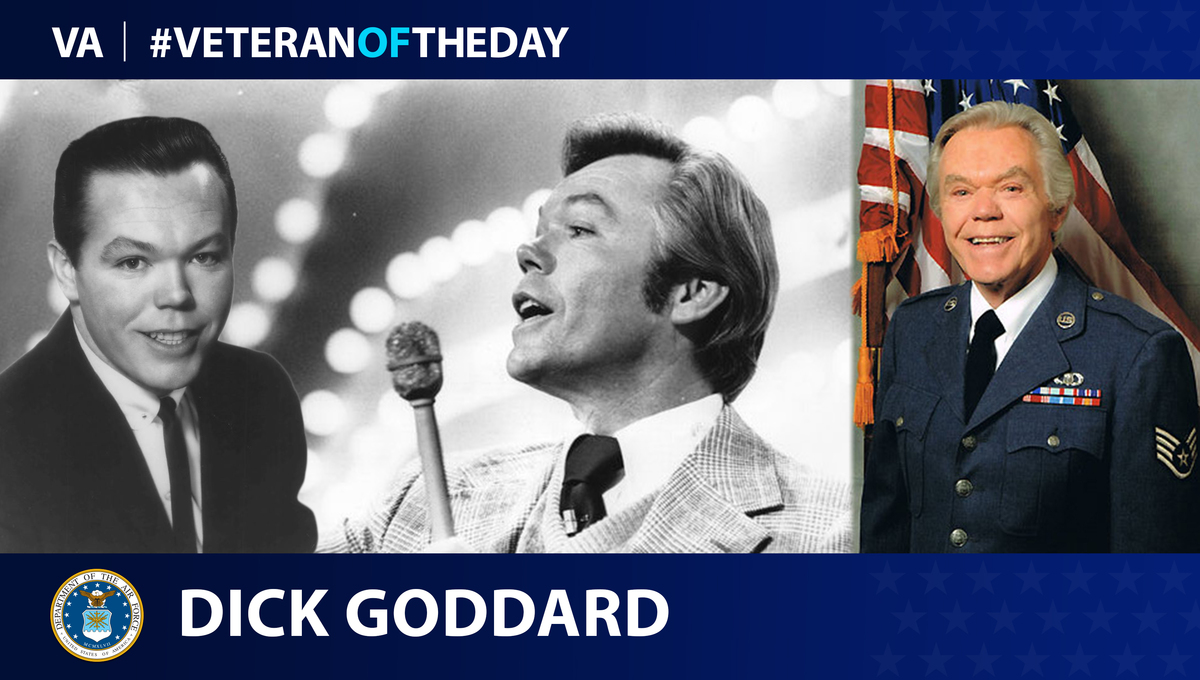 Today’s #VeteranOfTheDay is Air Force Veteran Dick Goddard, who later went on to hold the record for the longest career as a weather forecaster Sept. 19, 2016.

Dick Goddard was born in 1931 in Akron, Ohio. He and his family eventually moved to a small farm in Green, Ohio, where he graduated from Green High School. As a child, Goddard dreamed of being a cartoonist for Walt Disney. He was also an avid athlete who played football, basketball and baseball in high school. Prior to serving in the Air Force, Goddard tried out for the Brooklyn Dodgers at Firestone Park in Akron. The Dodgers told him to come back the next day, but Goddard never did since his friends weren’t invited back.

Goddard enlisted in the Air Force out of a desire to serve his country during the Korean War. He completed basic training at Sampson Air Force Base in New York and his aptitude test revealed that he qualified as a sharpshooter and a candidate for gunnery school. With little interest in this career path, Goddard’s lieutenant suggested he become a meteorologist. After completing weather school, Goddard went to Greenland for 12 months. After serving in Greenland, he served at the Severe Storm Forecast Center at Tinker Air Force Base in Oklahoma. Goddard then moved to the 6th Weather Squadron’s mobile unit. He was one of six meteorologists assigned to work with the Atomic Energy Commission for the first full-yield hydrogen bomb test, known as Operation Castle, in the Pacific Islands.

After serving in the Air Force for four years, Goddard discharged and attended Kent State University. Goddard majored in drama and forecasting while simultaneously working nights at the National Weather Service at the Akron-Canton Airport to pursue a career in weather forecasting. After five years of working at the Weather Bureau, he first appeared on television in 1961, after signing a 13-week contract with then KYW in Cleveland. Goddard was the first meteorologist to appear on Cleveland television. He went on to have a successful career as a meteorologist at WJW-TV.

On Sept. 19, 2016 Goddard set the Guinness World Record for the longest career as a weather forecaster with a career length of 51 years and 6 days. He retired from his weather career in November 2016. To honor Goddard’s career, WJW’s renamed their weather center after him.

In addition to a successful forecasting career, Goddard was also an active animal rights advocate. He championed an Ohio state bill, titled “Dick Goddard’s Law” to increase the severity of penalties for animal abuse. Goddard also created the Wollybear Festival, an annual event dedicated to teaching children about weather, supporting animal rights and providing a day of family fun.

In his later years, Goddard moved to a medical facility in Florida where he passed away in August 2020 at the age of 89. He is survived by his daughter Kim.