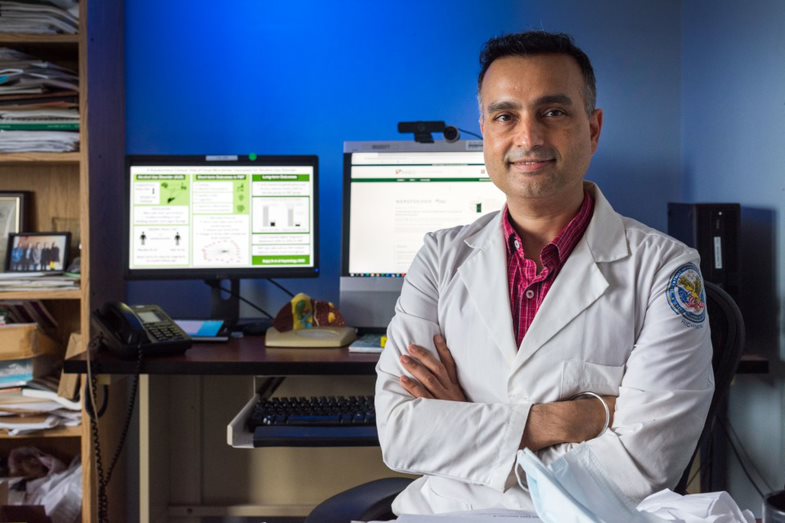 Fecal transplant therapy is safe and can reduce alcohol craving and use in patients with alcohol use disorder, found a VA study. The preliminary study by Central Virginia Veterans Healthcare System and Virginia Commonwealth University researchers showed that fecal microbiota transplant could be safe and potentially effective towards reducing alcohol misuse, pending further research.

“This study is a proof of concept that the way to the brain is through the gut,” said Dr. Jasmohan Bajaj, first author on the study. “This, if confirmed in larger studies, may have implications for alcohol misuse and potentially other substance abuse disorders that are based on addictive behavior and are very common in our Veterans.”

The results appeared in the journal Hepatology on Aug. 4, 2020.

Cirrhosis, scarring of the liver, can result from heavy drinking. Continued alcohol misuse after cirrhosis can hasten the disease’s progression. Previous research has shown that alcohol use disorder is associated with changes in the bacteria in the gut. These changes in gut microbiota—the collection of microorganisms within the body—can make cirrhosis worse.

Alcohol use disorder, with or without cirrhosis, is also linked to major changes in the gut-brain axis, the communication between the central nervous system and the gastrointestinal tract. Research has shown that gut microbiota can influence brain signaling, affecting cognition. Some research has even suggested that the bacterial make-up of the digestive system is involved in addictive behavior and could be linked to alcohol intake.

To explore this connection, the research team performed a randomized clinical trial of fecal microbiota transplant versus placebo on 20 patients at the Hunter Holmes VA Medical Center. In the transplant, processed fecal matter from a donor is enriched with beneficial bacteria and introduced into the patients. The patients in the study were then monitored for six months. All patients had cirrhosis and alcohol use disorder and had failed or were unwilling to participate in usual therapies. In addition, many also had depression and PTSD. These co-occurring conditions made the patients unable to stop drinking even though they had already damaged their livers, explained Bajaj.

Fifteen days into the study, nine transplant patients had reduced alcohol cravings, compared with only three in the placebo group. This was accompanied by lower urinary Etg/creatinine levels, a measure of actual alcohol intake.

This is the first human study to test fecal microbiota transplant to potentially reduce alcohol addiction, according to Bajaj. Prior animal studies have shown a linkage between the microbiota and alcohol intake.

The transplant group also had reduced levels of markers associated with systemic inflammation. These positive changes were not seen in the placebo group.

Tests showed that fecal transplant led to increased microbial diversity in the gut. Microbe diversity did not change in the placebo group. Patients who received the transplant had a greater abundance of beneficial bacteria and products such as short-chain fatty acids, which can affect the brain. Some of these bacteria are usually decreased in alcohol-related cirrhosis and liver disease. More of this type of bacteria is associated with protection from alcohol-induced intestinal and liver injury.