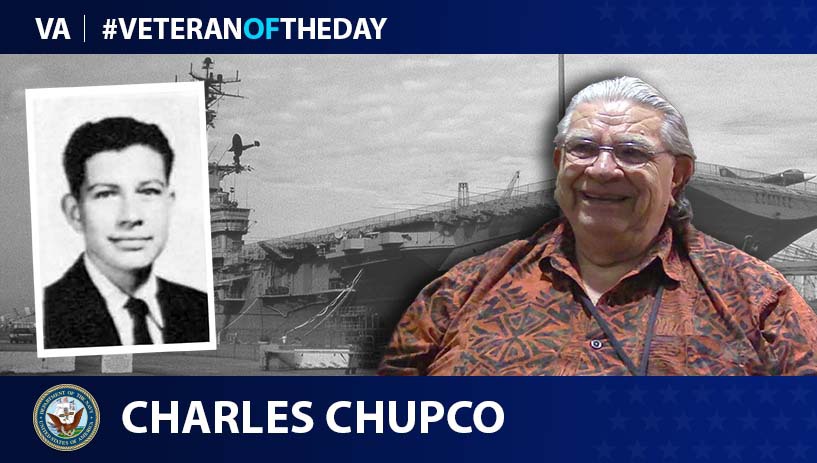 Charles Sequoyah Lee Chupco grew up in the Creek community of Wewoka, Oklahoma. His father was a Creek Methodist preacher. He attended Chilocco High School from 1956 to 1960, where he enjoyed studying literature, learning auto mechanics, and playing golf. In his senior year, Chupco joined the Army National Guard, 179th Infantry, but after graduation Chupco decided to join the Navy. He enlisted May 28, 1960.

After passing the physical exam, Chupco traveled to San Diego, California. He served aboard USS Maury (AGS-16), where he worked deck duty and began to advance in rank. He had an interest in becoming a gunner’s mate and started working towards that career aboard the ship.

After his initial enlistment, Chupco signed up for six more years. He transferred to a new ship in San Diego, a combat stores ship. There, he advanced to first class and eventually took over the gun division. After the Vietnam War started, Chupco transferred to Yokusaka, Japan, where he resupplied the carrier and destroyer groups.

Chupco eventually returned to the U.S. for shore duty. He became a recruiter for the Navy in Oklahoma City and during this time, he married. In 1971, he went back to Guam as a gunner’s mate. He spent two years there stopping Saipan traffic along the coast. After the war ended, Chupco made his way back to Lawton, Oklahoma, where he spent another two years recruiting.

Chupco’s last assignment was on USS John Paul Jones in San Diego, California. His family moved with him while the Navy overhauled the ship. In 1979, Chupco retired after 20 years of service. He went back to school to get a business degree and started working for Cliff Beck Chevrolet as a bookkeeper before working for the local school district.