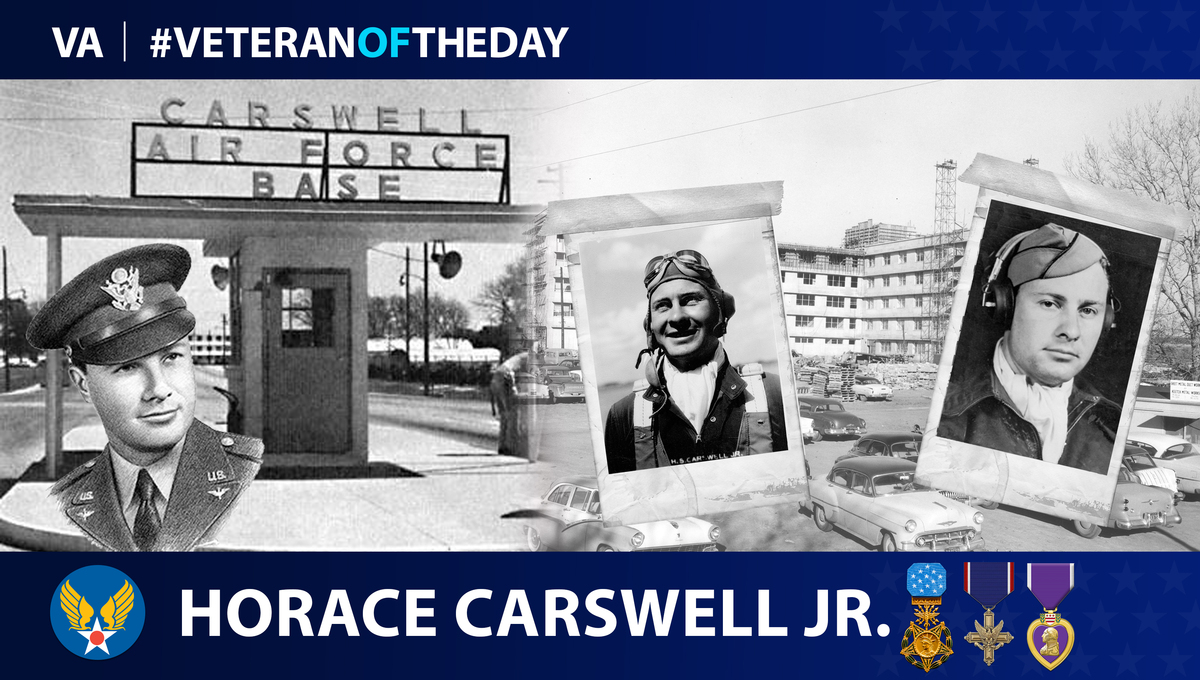 Horace Carswell Jr., a native of Fort Worth, Texas, joined the Army Air Corps in Dallas as a flying cadet March 26, 1940. Prior to his enlistment, Carswell earned his bachelor’s degree in physical education from Texas Christian University. He played both football and baseball for the Horned Frogs until his graduation in 1939.

After completing primary flight training in Tulsa, Oklahoma, Carswell returned to Texas. He attended primary flight school and the Army Air Corps’ advanced school outside of San Antonio. Upon graduation, Carswell commissioned as a second lieutenant in the Army Air Corps Reserve. When assigned to active duty in 1941, he first served as a flight instructor at Randolph Field in San Antonio. Carswell then transferred between Tucson, Arizona, and Biggs Army Air Field in El Paso, Texas. He promoted to captain in 1942 after working as a flight commander.

His rotation of assignments continued the next year with moves to bases in both Clovis, New Mexico, and Langley, Virginia. Carswell’s resumé developed exponentially in these two locations, serving as squadron and deputy group commander of the 302nd Group in the 356th Bombardment Squadron. His time stateside concluded with a promotion to major, before transferring to the 308th Bombardment Group stationed in China.

In Liuchow, China, Carswell was responsible for a detachment of B-24Js, bombers which were outfitted with radars and intended for low-altitude flights. On the evening of Oct. 26, 1944, Carswell piloted a B-24J over the South China Sea, ordering two bombing runs of Japanese convoys. During the second attack, Carswell’s bomber was hit by Japanese fire. Carswell directed the aircraft to the coastline but could not maintain altitude and ordered his fellow crewmembers to abandon the bomber. His copilot and one other squadron member refused to do so. Eventually, the aircraft crashed into a mountainside, fatally wounding all three men aboard.