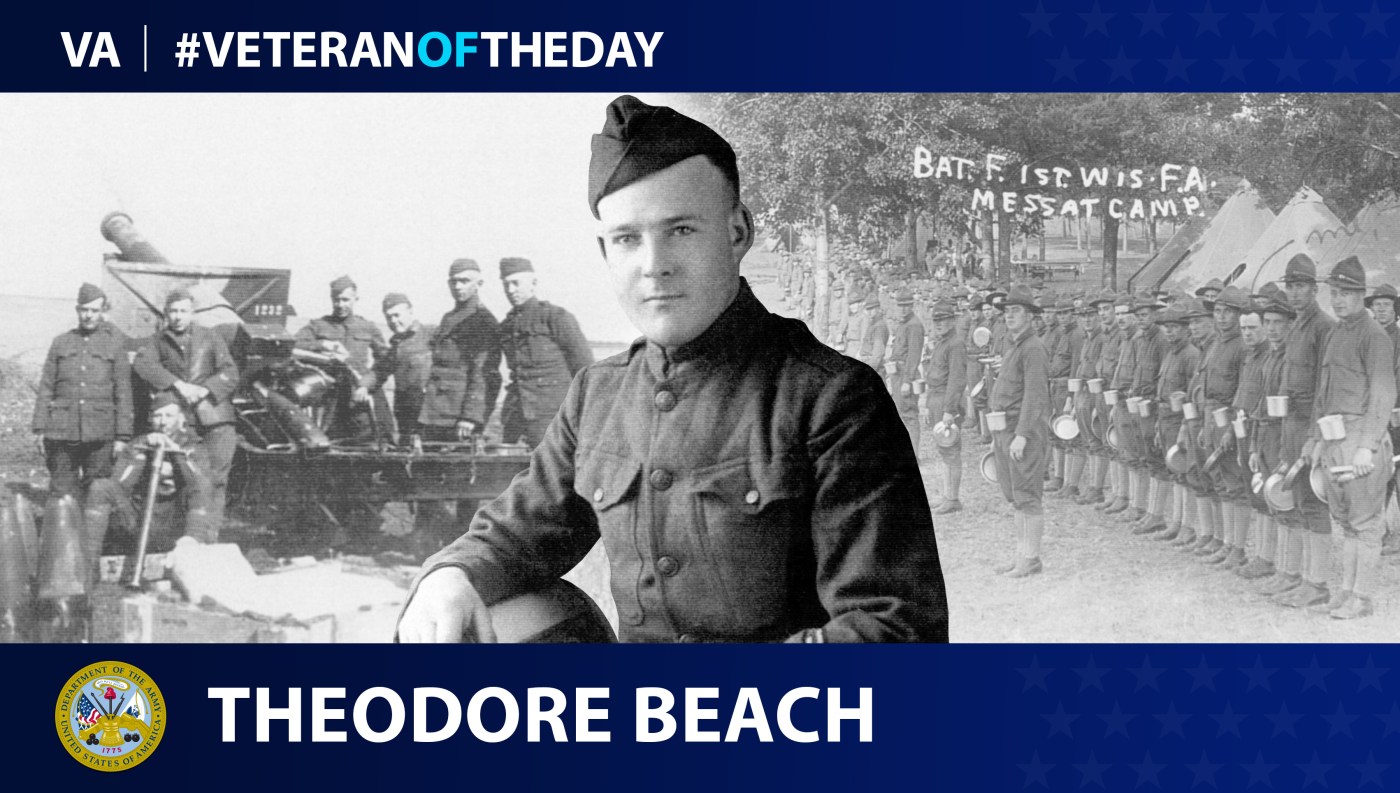 Today’s #VeteranOfTheDay is Army Veteran Theodore Edward Beach, who served with a Howitzer battery in France during World War I.

Theodore Edward Beach was born in Menasha, Wisconsin in March 1895. He was the only child of Andrew Jackson Beach Jr. and Eva Elizabeth Justina Rockstroh Beach. In 1914 he attended Oshkosh Normal School (currently known as University of Wisconsin at Oshkosh). He majored in industrial arts. While at university, he fell in love with Edith Lyle Birr. They married in Waukegan, Illinois on April 14, 1917. Beach settled in Racine, Wisconsin. He worked at Mitchells, originally a wagon works but by that time the maker of the Mitchell car.

Beach joined the National Guard as a part of Battery F, a field artillery unit composed entirely of volunteers from Racine. Battery F was part of the 121st Field Artillery, 32nd Red Arrow Division. Battery F moved to Camp MacArthur near Waco, Texas, for training and later to Camp Merritt, New Jersey, in January 1918 to await transport to France.

Beach started a diary March 3, 1918, when he boarded a former German passenger ship for the trip to England. Battery F arrived in France and trained at Camp de Coetquidan, where they used 155mm Howitzers from Schneider, a French munitions company. They were in action on the Alsace Front, Aisne-Marne Offensive, Oise-Aisne Offensive, and Meuse Argonne Offensive. The diary ends on November 28, 1918, after the armistice. Battery F was at Bussy, where it was being motorized after losing most of its horses in combat. The battery was temporarily assigned to the 88th Division for drill and maneuvers. On April 30, 1919, they sailed for Boston on the battleship USS Georgia, arriving on May 12, 1919. They transferred to Camp Grant, Illinois, where they were mustered out on May 19, 1919, returning to Racine by train.

Beach went on to teach industrial arts and mechanical drawing at McKinley Jr. High School, and he later accepted a position as head of the industrial arts department. Beach and his wife Lyle welcomed their first son, Allan Birr Beach, in June 1927. Beach retired from teaching in 1960 at the age of 65. He enjoyed reading at the local public library, writing poems to his beloved Lyle, and held a great appreciation for nature. He passed away Oct. 27, 1981.