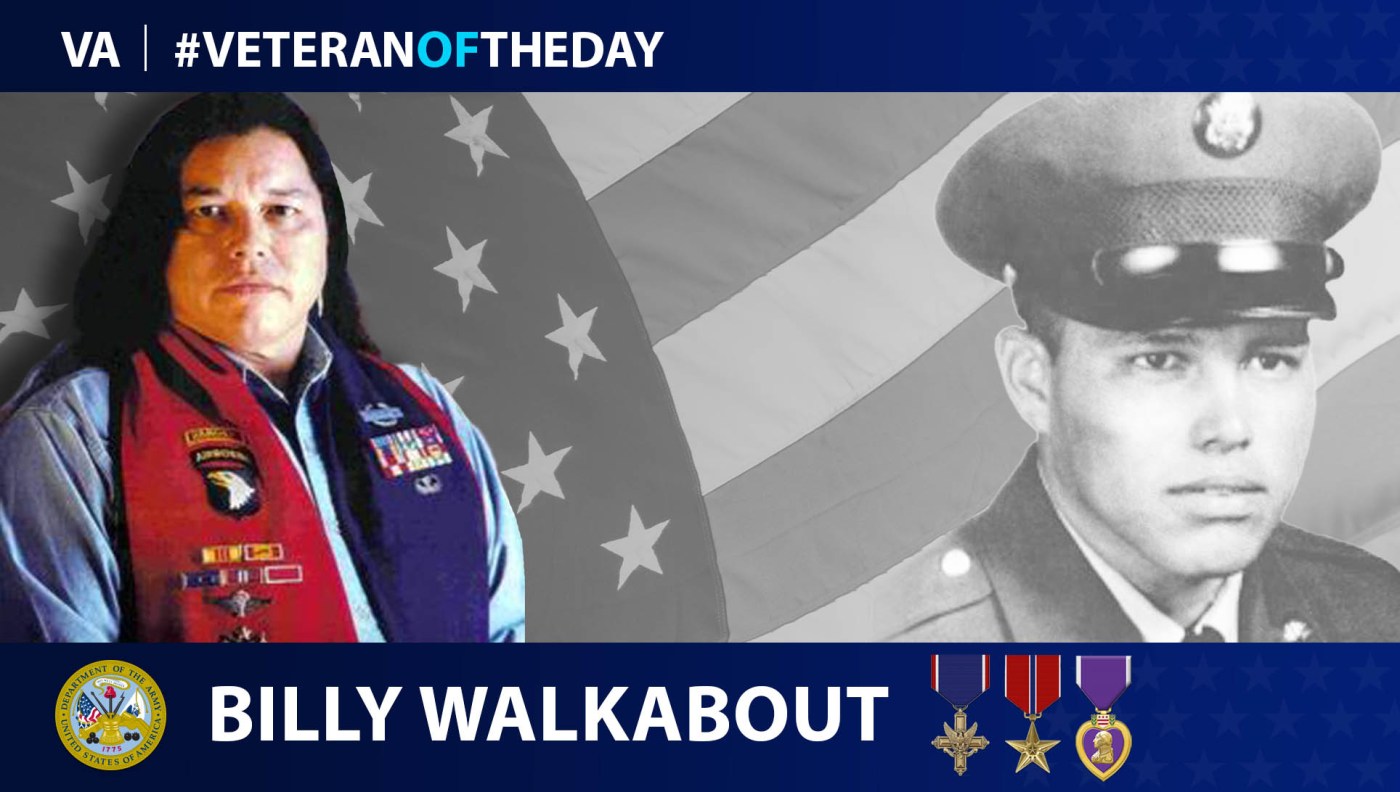 Billy Walkabout was born in March 1949 in Cherokee County, Oklahoma, and was born into the Cherokee tribe of Anishanoi, or Blue Holly Clan. He was the son of Warren Walkabout and Bobby Jean Chaudion Walkabout. After graduating in 1968 from U.S. Grant High School in Oklahoma City, Walkabout enlisted in the U.S. Army.

In the Army, Walkabout first served as an infantryman in Vietnam, serving in Company F, 58th Infantry, 101st Airborne Division (Airmobile). He later became a SP4 and distinguished himself with valorous actions on Nov. 20, 1968, when he ambushed an enemy squad on a jungle trail during a long-range reconnaissance patrol southwest of Hue. As a helicopter extraction arrived, the enemy attacked Walkabout and the other men. The soldiers fought back against the enemies and successfully escaped despite injuries.

On the helicopter, he administered first aid to the wounded soldier. When the aircraft received heavy fire, Walkabout distracted the enemy so they concentrated their assault and placed continuous fire on the opposition. A command-detonated mine tore through the team, killing three soldiers and wounding many. While severely hurt from the explosion, Walkabout went to his men and administered lifesaving first aid to the soldiers. He also managed gunship and tactical air strikes on the enemy’s positions.

When the next evacuation helicopters arrived, Walkabout and his fellow soldiers were still under hazardous enemy fire. Despite his injuries, he helped the wounded soldiers to board the aircraft. After the dead soldiers were aboard the helicopter, Walkabout extracted and returned to safety.

During his service, Walkabout received many medals, including the Distinguished Service Cross. He left the Army after reaching the rank of second lieutenant.

In a 1986 interview with the Associated Press, Walkabout shared that his 23 months in Vietnam left him with disabling injuries and scarring memories. He said, “War is not hell, it’s worse.”

Suffering from post-traumatic stress disorders, suicidal thoughts and years of self-isolation, the only solace Walkabout found was in Native American powwows.

In April 2000, Walkabout married Juanita Medbury-Walkabout, and the couple had three children, Amy Rene, Justin and Trista. He was also a life member of the Military Order of the Purple Heart, Disabled American Veterans, Legion of Valor and the Veterans of Foreign Wars of the United States.

Walkabout lived with his wife in Montville, Connecticut, near other Native American tribal members like the Mashantucket Pequot and Mohegan. He passed away March 13, 2007, and is buried in Arlington National Cemetery.

According to the Department of Defense, he was the most decorated Native American soldier of the Vietnam War.