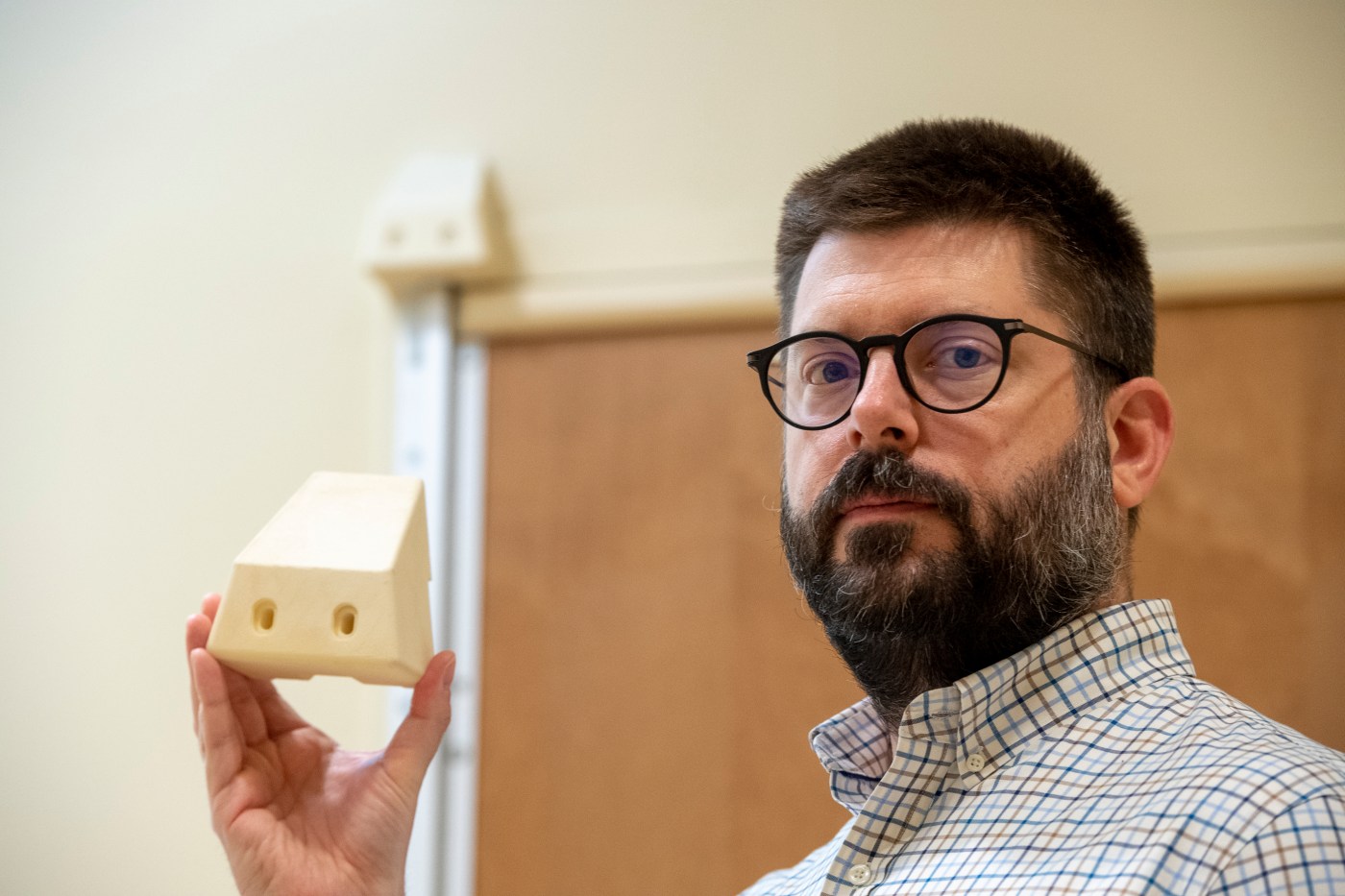 In hospital rooms designated for suicidal patients, bathrooms are considered a dangerous area where people may try to kill themselves because they have more privacy. Those areas, including the bathroom door, must be designed so it’s impossible to wrap a rope, a sheet, a belt, or any other item around an anchor point that can support a hanging.

In VA, most doors in mental health units leading from the bedroom to the bathroom are sized down and made of a flimsy breakaway material unable to hold weight. An anchor point needs to support only about 10 pounds of weight around the neck to work.

The VA Pittsburgh Healthcare System has a different type of setup. The nearly 80 rooms in its mental health wing include full length, three-inch-thick bathroom doors.

More than a year ago, a staff member spotted a vulnerable area on those doors that patients could use to try to hang themselves. The hospital responded by installing a device that would make it virtually impossible for someone to do so.

The 3D block removes an anchor point next to the alarm bar that runs across the top of the door to notify hospital staff of a suicide attempt.

The Human Engineering Research Laboratories, a collaborative effort between VA Pittsburgh and the University of Pittsburgh, designed and produced the device. The 3D-printed block, which is about the size of a coffee cup, is placed in the corner at the top of a door to prevent it from being used as a ligature point – an area where a piece of material can be bound and tied tightly. The block has been installed on all of the bathroom doors in the rooms in the mental health wing.

An alarm bar that would alert hospital workers if someone tried to die by suicide has run across the top of all in-suite bathroom and corridor doors in the wing since it was built in 2015. But the additional device was needed to eliminate the vulnerability posed by the remaining anchor point. The device will set off the alarm bar if someone tries to carry out a hanging.

James MacAulay, the supervisory general engineer at VA Pittsburgh, took the lead in pushing for the new device, which brings the alarm system into play and provides enough warning time for hospital staff to respond to a potential hanging. “The device, in itself, doesn’t remove the pinch point because the gap at the top of the door is still there,” he says. “All it’s doing is moving the anti-ligature potential to a point where we’re protected.”

`Not all VA hospitals are created equal’

MacAulay is unaware if other VA medical centers are set up to benefit from a similar installation.

“Not all VA hospitals are created equal,” he says. “We have very nice rooms with in-suite bathrooms. I don’t know if all VAs have that. It’s really the bathroom door that’s affected here. The other door that we protect is the door going into the room from the main hallway. We also have an anti-ligature alarm bar on that one for protection if anyone tries to use it. That one is a little less scary because it’s on the outside in the corridor. The bathroom one is the one that’s hidden. It’s inside the typically closed corridor door between where the patient sleeps and the bathroom. Not all VA hospitals have that setup.”

In 2019, following a hanging on the inside of a corridor door at a VA hospital, VA required the use of over-the-door alarms on corridor doors of patient rooms in acute mental health units. No such mandate exists for bathroom doors in patient rooms. But the VA Mental Health Environment of Care Checklist requires interior bathroom doors to be void of anchor points (see sidebar). A VA directive calls for compliance with the checklist.

The most common way for someone to attempt suicide in a mental health unit is to take a sheet or other lanyard and put it over the top of a door, then shut the door and hang on the inside of the door, says Dr. Peter Mills, a psychologist with the VA National Center for Patient Safety. Patients have also died from drug overdose and asphyxiation, he says.

Before the installation of the 3D block at VA Pittsburgh, no pattern existed of patients using the unprotected area on the bathroom door to attempt suicide, MacAulay notes. A hospital worker simply noticed the vulnerability and brought it to the attention of the staff.

“It came down to what to do about it,” MacAulay says. “We had meetings with the behavioral health staff, with the suicide prevention staff. It was kind of a joint push that we needed to do something about it once it had been discovered. We discussed lots of things, everything from just removing the doors completely to trimming the doors down so you would have a more open area on top that would eliminate the potential for a pinch point.”

Click here to read the rest of this story and the sidebar.