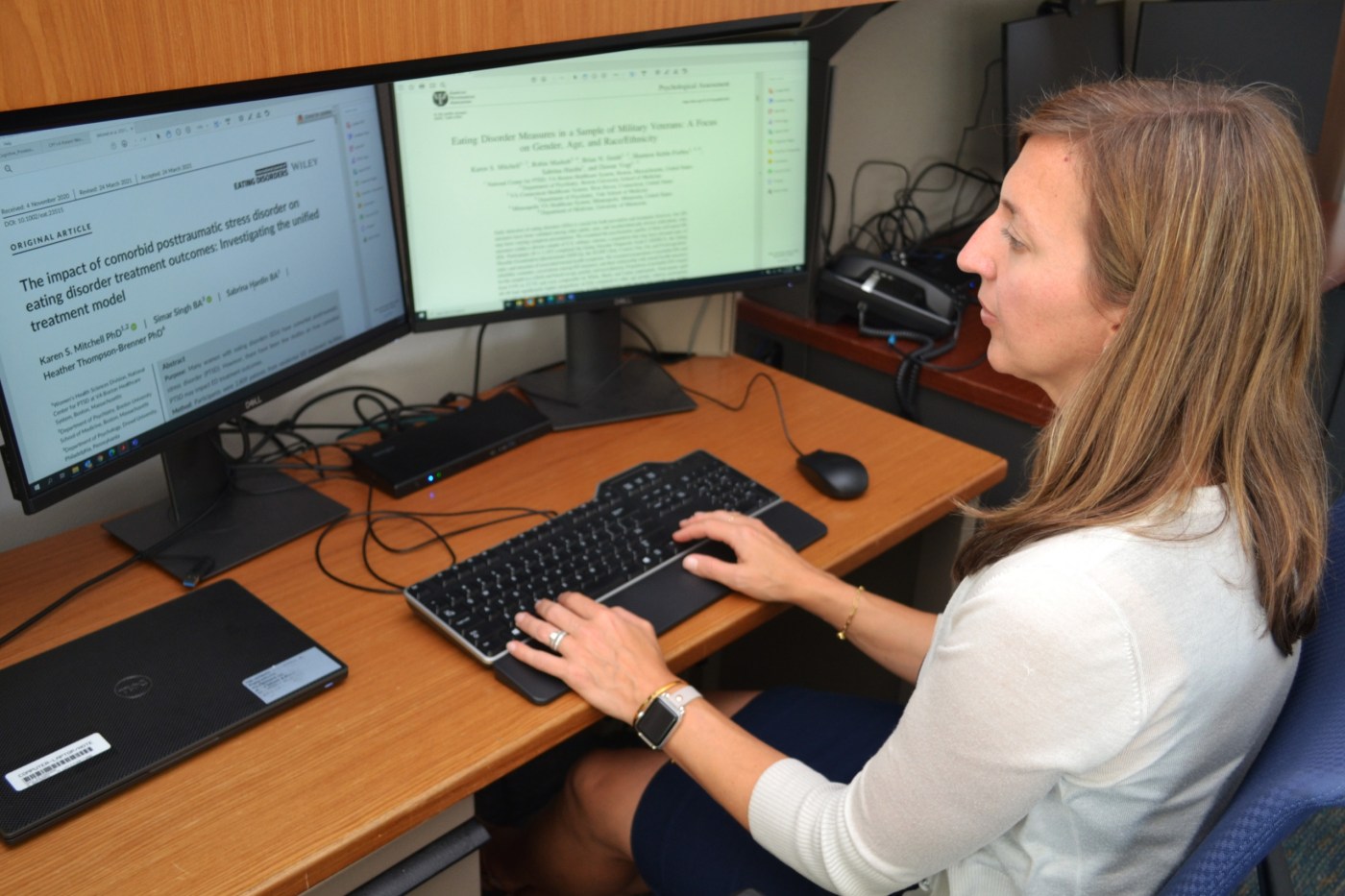 A new study exploring how PTSD may impact treatment outcomes for women with eating disorders suggests an emotion-based psychotherapy is a promising treatment for patients with or without PTSD.

The psychotherapy, known as the Unified Treatment Model (UTM), addresses problems with emotions that are relevant to many mental disorders. It helps patients improve motivation to engage in both PTSD and eating disorder treatment, to become aware of their emotions without labeling them as “good” or “bad,” to think more openly, to reduce avoidance of negative emotions, and to tolerate the physiological aspects of emotions, such as sweating and increased heart rate.

The UTM also focuses on learning to accept the shape of one’s own body and on exposure to feared or forbidden foods. 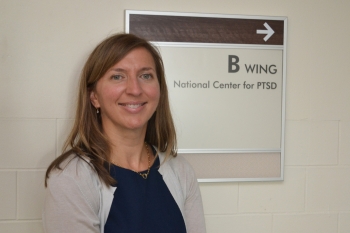 Mitchell is affiliated with the Women’s Health Sciences Division at the National Center for PTSD. (Photo by Win Danielson)

Dr. Karen Mitchell, a clinical psychologist at the VA Boston Healthcare System, led the study. She’s affiliated with the Women’s Health Sciences Division at the National Center for PTSD. Nearly 3,000 patients who were treated with the Unified Treatment Model at The Renfrew Center eating disorder facility in Philadelphia agreed to let Mitchell and her team access their data.

Through the data, the researchers investigated whether PTSD diagnosis at admission was linked to changes in eating disorder examination scores, binge eating, self-induced vomiting, and eating restrictions across three time points, as well as clinically significant improvement and treatment dropout. According to the findings, 65% of the patients showed improvement in symptoms from admission to discharge, based on their eating disorder examination questionnaire scores.

“Although PTSD diagnoses were associated with higher eating disorder symptom levels at admission, PTSD was not associated with worse treatment outcomes, suggesting the UTM is a promising treatment for patients with and without PTSD,” the researchers write. “Future studies should investigate the impact of eating disorder treatment on PTSD symptoms in order to determine the need for integrated treatments for these comorbid conditions.”

Prior research supported effectiveness of psychotherapy

Eating disorder questionnaire scores and symptoms increased from discharge to six-month follow-up. But Mitchell did not find that alarming.

“It’s fairly common that symptoms will increase somewhat in the longer term relative to symptom levels immediately following treatment,” she says. “In this case, patients were enrolled in a residential treatment, which is a highly structured environment. Leaving that structure and having to apply skills learned in treatment to real life can be challenging. Symptoms at the six-month follow up were still lower than they were at admission before treatment, which is encouraging as far as long-term success of the UTM.”

The Renfrew Center created the Unified Treatment Model. It’s a modified version of the Unified Protocol, a form of cognitive behavioral therapy for people diagnosed with depression, anxiety disorders and emotional problems.

Officials at The Renfrew Center also considered cognitive behavioral therapy for eating disorders and family-based therapy to treat their residents. But they chose the UTM thinking it would be better therapeutically to address their patients’ co-occurring health conditions, according to Mitchell. Two studies have found that patients treated with the Unified Treatment Model at eating disorder facilities improved considerably in factors reflecting aspects of emotion avoidance and emotion regulation from admission to six months post-discharge, compared to patients treated prior to the implementation of the UTM.

Researcher a bit surprised by results

The patients were enrolled at Renfrew for an average of 32 days and stayed at the facility during the period. Meals and snacks were supervised. The patients took part in group and individual therapy UTM sessions, as well as individual sessions with dietitians and psychiatrists for medication management. Treatment also included structured daily activities.

Mitchell was somewhat surprised by the results of the study.