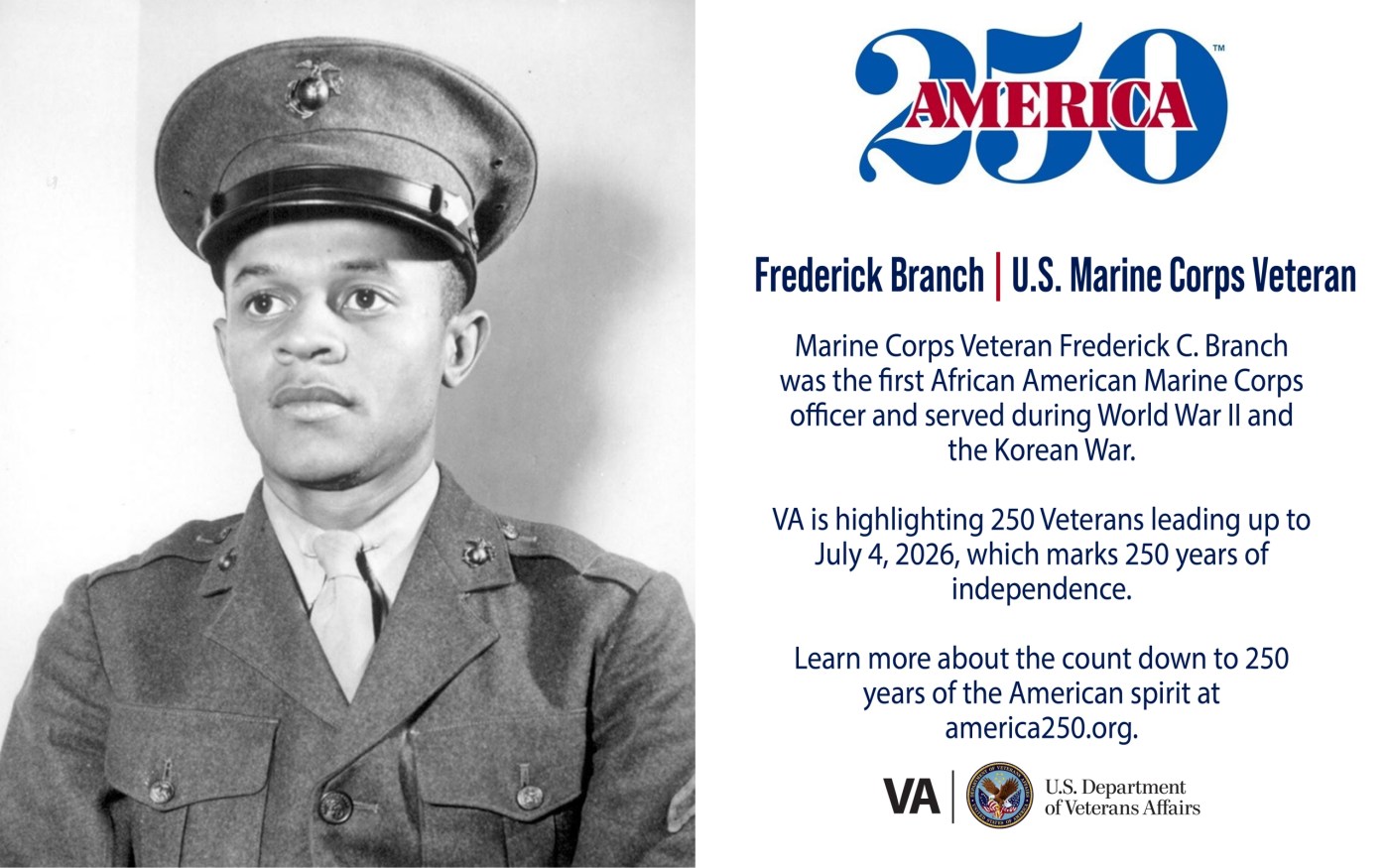 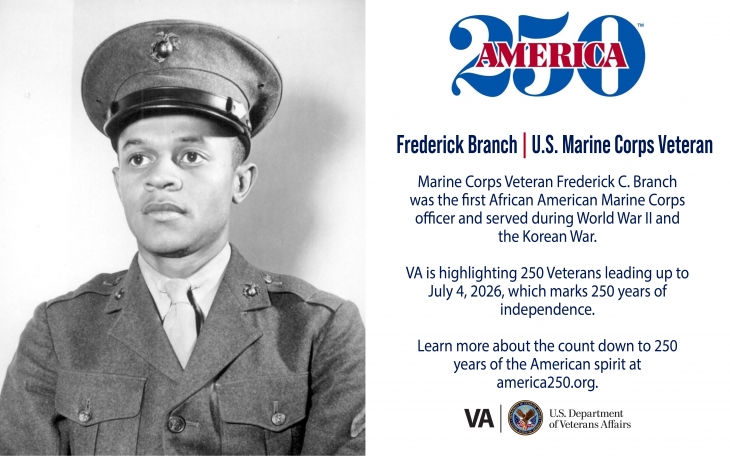 Frederick C. Branch was born in Hamlet, North Carolina, as the fourth of seven brothers. He grew up in Mamaroneck, New York, and originally attended Johnson C. Smith University in Charlotte before transferring to Temple University in Philadelphia. While attending Temple University, Branch received an Army draft notice in May 1943. After reporting to Fort Bragg, North Carolina, Branch went through basic training but instead of joining the Army, he joined the Marine Corps.

“For a person of color to aspire to be an officer in the Marine Corps was a danger,” Marine Corps Gen. Cornell A. Wilson Jr. stated in Branch’s 2005 Los Angeles Times obituary. “We still had Jim Crow laws. We still had unwritten rules and regulations in this country.”

Branch applied for Officer Candidate School after completing training at Montford Point but was denied due to his race.

“They told me to shut that blankety-blank stuff up about being an officer. ‘You ain’t going to be no officer,’” he recalled in a 1995 interview.

Instead, he joined a supply unit supporting operations against the Japanese in the Pacific. However, Branch’s diligence in the unit impressed his commanding officer and he recommended him to OCS. Branch returned to the U.S. and joined the Navy’s V-12 program at Purdue University in West Lafayette, Indiana. He was the only African American in a class of 250 students but continued to excel and made the dean’s list. On Nov. 10, 1945, the birthday of the Marine Corps, Branch commissioned as a second lieutenant and became the first African American officer in the Marine Corps.

World War II ended in August 1945, so Branch joined the Marine Corps Reserve. In 1947, Branch graduated from Temple University with a bachelor’s degree in physics. When the Korean War started in June 1950, Branch was reactivated. He took command of an anti-aircraft training platoon at Camp Pendleton, California. He was promoted to captain but returned to the Reserve after the Korean War ended in 1954. Branch remained in the Reserve for another year before resigning his commission in 1955 due to continued discrimination in the armed forces.

After leaving the military, Branch became a teacher at Dobbins High School in Philadelphia, where he established the school’s science department. He taught at the school until his retirement in 1988. In 1995, the Senate passed a resolution to honor his contribution to the integration of the Marine Corps, and in 1997, the Marine Corps named a training building for him at Marine OCS at Quantico, Virginia.

Branch passed away in April 2005 at the age of 82. He was buried at Quantico National Cemetery in Virginia with full military honors. That same year, the Senate passed Resolution 116, honoring Branch’s lifetime achievements.

In 2006, the Marine Corps created the Frederick C. Branch Leadership Scholarship for Black students attending or accepted into one of 17 historically Black colleges and universities that have Naval Reserve Officers Training Corps programs.

“Every African American officer can trace his beginnings back to Fred Branch,” said Joe Geeter, vice president of the Montford Point Association in Branch’s 2005 Washington Post obituary. “Each of these officers owes his success to the courage and dedication he showed while going through Officer Candidate School during World War II.”