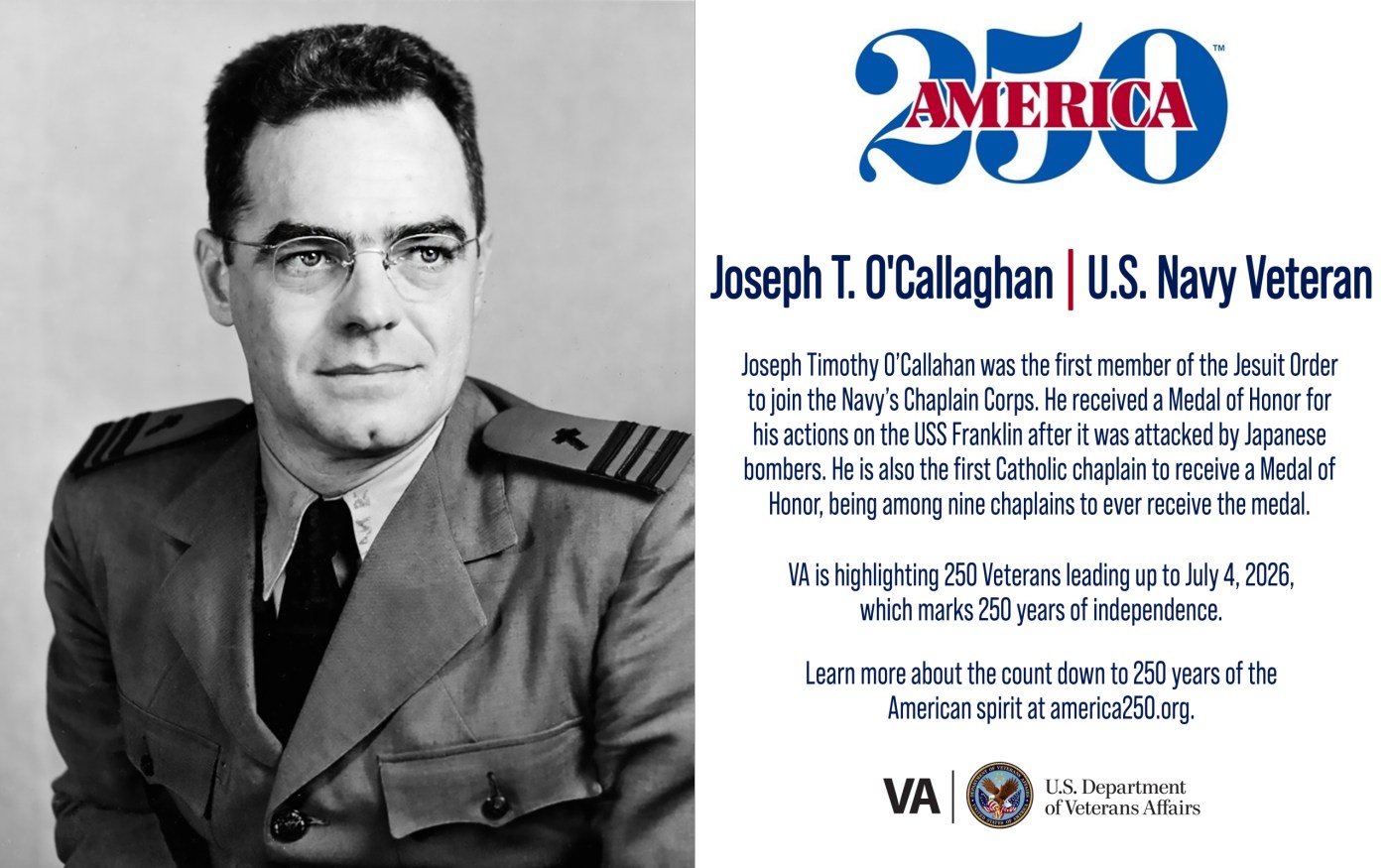 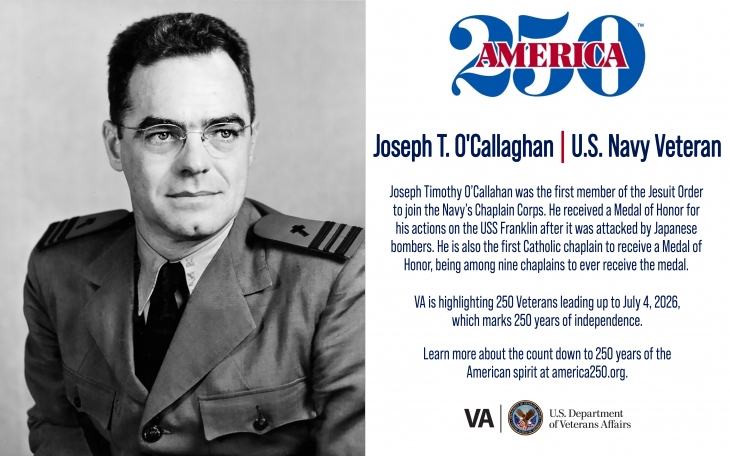 Joseph Timothy O’Callahan was born in Boston, Massachusetts in 1905. After graduating from high school in 1922, he joined a Catholic order, the Society for Jesus, more commonly known as the Jesuits. After receiving bachelor’s and master’s degrees in 1925 and 1929, respectively, O’Callahan was ordained into the Jesuit order in 1934. Between 1937 and 1938, he worked as a professor of philosophy at Weston Jesuit School of Theology. Before World War II, O’Callahan was head of the mathematics department at Holy Cross College in Massachusetts.

O’Callahan became a lieutenant in the Naval Reserve Chaplain Corps in 1940 and went to the Navy air station at Pensacola, Florida. He was the first member of the Jesuit Order to join the Navy’s Chaplain Corps. In 1942, O’Callahan served as a chaplain on the aircraft carrier USS Ranger in the Mediterranean. Between 1944 and early 1945, he served as a chaplain at naval bases in California and Hawaii. In February 1945, he went to the aircraft carrier USS Franklin, stationed in the Pacific.

On March 19, 1945, while USS Franklin was approximately 50 miles off the coast of Japan, a single Japanese aircraft permeated American air defenses and dropped two bombs onto USS Franklin. These two bombs had a devastating effect on the ship; they had hit ammunition and aviation fuel reserves, which caused further explosions and damage. O’Callahan was among those wounded in the initial attack, but after recovering his senses, he began aiding others injured and administering last rites. In addition to this, O’Callahan helped organize efforts to combat the flames and smoke that were paralyzing the ship and the men aboard. Throughout the entire ordeal, the corridors of the ship filled with suffocating smoke, explosive fragments and hot metal.

The attack killed 807 and wounded 487 men aboard USS Franklin. The resulting chaos lasted approximately 11 hours. O’Callahan, along with the ship’s captain and 10 other men, received Navy Crosses for their actions during the attack. O’Callahan, out of modesty and humility, refused the Navy Cross and any praise for his actions. His actions came to the attention of President Harry S. Truman, who interceded and upgraded the medal to a Medal of Honor. Truman presented him a Medal of Honor in January 1946 at the White House. He is also the first Catholic chaplain to receive a Medal of Honor, being among nine chaplains to ever receive the medal.

O’Callahan promoted to the rank of commander in July 1945. In 1946, he left active duty and returned to teaching at Holy Cross College. In 1953, he formally left and retired from the Navy Reserve and promoted on the retired list to the rank of captain. O’Callahan passed away in 1964. A destroyer was commissioned USS O’Callahan in his honor in 1968.