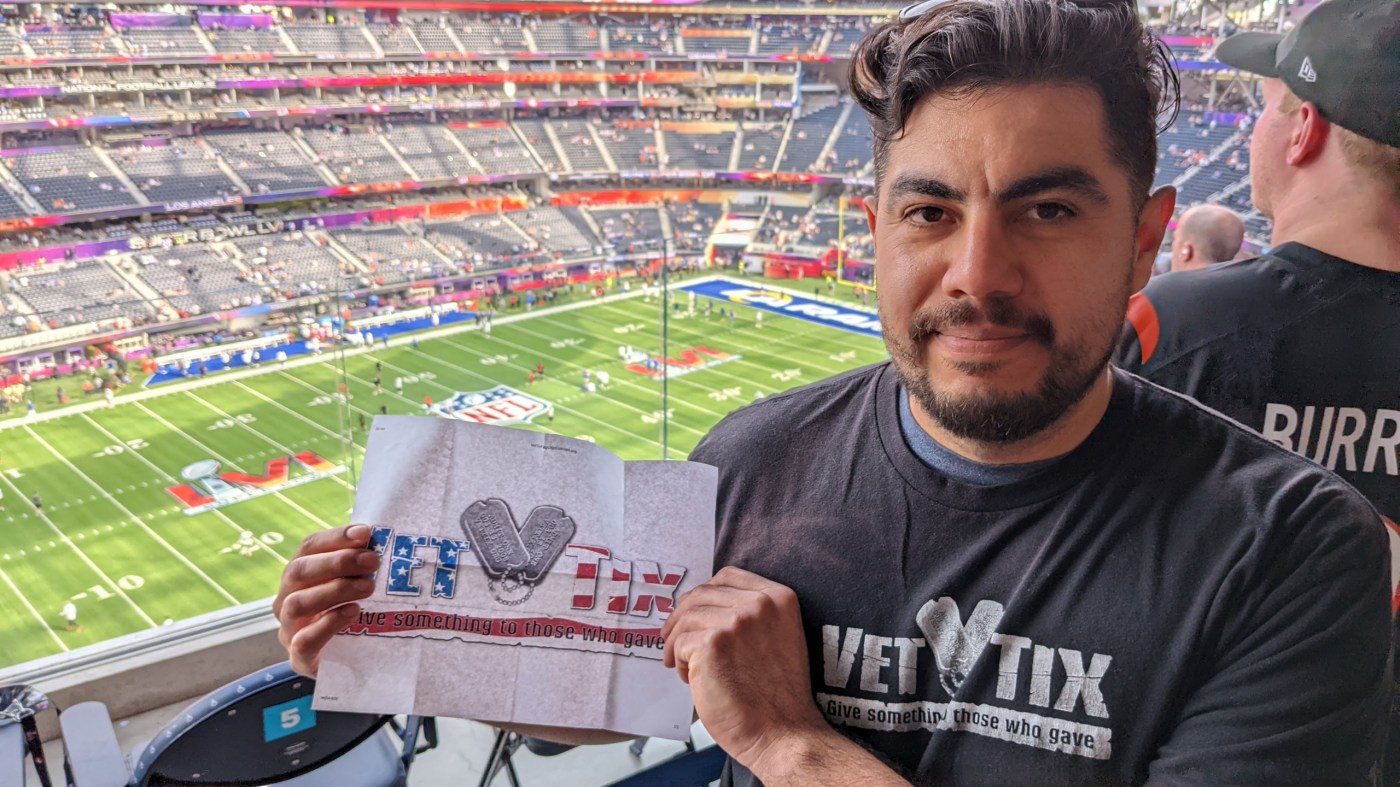 It took a few seconds for the good news to sink in. Three days after the Los Angeles Rams and Cincinnati Bengals earned their Super Bowl spots, Eddie Cerda’s cellphone dinged with a surprise message.

The Navy Veteran was going to join them – or at least watch from the stands at SoFi Stadium – and it was only going to cost him a small delivery fee.

It didn’t register right away.

“Then I got this big smile on my face,” he said. “I said to myself, ‘I’m actually going to the Super Bowl!’” 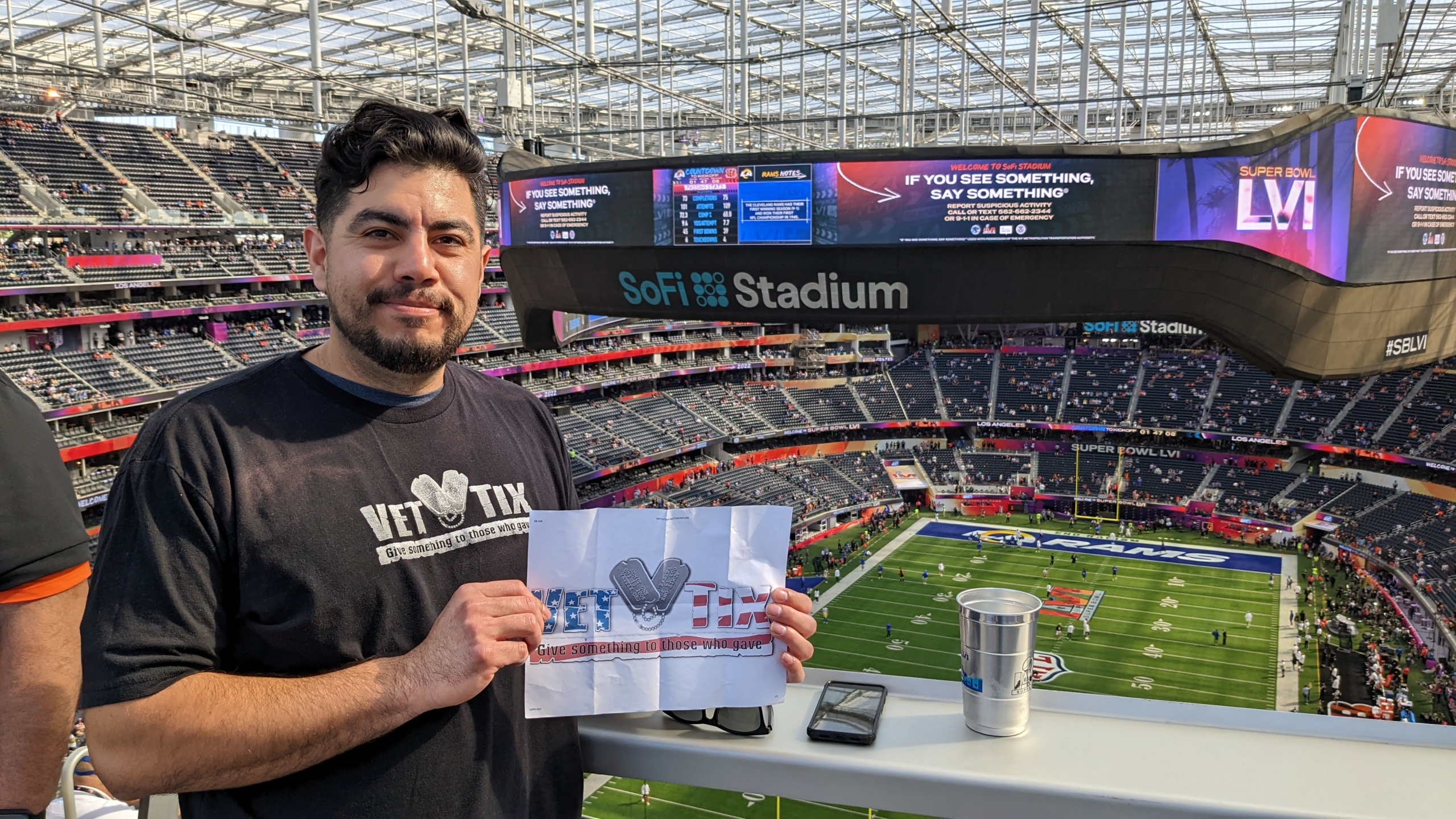 Navy Veteran Eddie Cerda won tickets to Super Bowl LVI thanks to Vet Tix. The nonprofit provides sports, concert and other event tickets to Veterans and the military.

The only cost is the handling fee. Five percent of that goes back to run the organization and the rest is reinvested to give more tickets away.

“I figured I’d check their web site right after the AFC and NFC championship games,” said Cerda, who lives in Los Angeles and gets care at VA Long Beach Healthcare System.

That turned out to be a good decision.

Vet Tix secured two seats directly from the NFL. More than 11,000 signed up for the chance to get them, said Steve Weintraub, Vet Tix chief strategy officer.

“It’s funny because I look up the price of tickets every year, and those tickets were going for at least 5 grand each,” Cerda said.

He decided to use the other ticket for his brother, and almost texted him the news.

“I started to text and stopped,” Cerda continued. “I had to tell him in person to see his reaction. It was worth it to see that. He just looked very, very shocked, like someone ran over his cat.”

And that, Weintraub said, is why Vet Tix does what it does.

“The tagline of our organization is to give something to those who gave,” he said. “If you’re an E-5 or a Veteran, and you’ve got a family and two kids and make $40,000 a year, you don’t have money in your budget for entertainment. But now with Vet Tix, you can take your family to a game, you can afford the hot dogs, soda and a ball cap. That instills that pride that you can provide for your family. If you served your country, you deserve to be able to go to a ballgame.”

Weintraub, a Marine Corps Vet, knows the struggle firsthand. He spent 32 years in uniform – 10 active-duty and 22 years in the Reserve – and served in Somalia and Iraq. But when he first got off active duty in 1994 as a first lieutenant, the job he lined up fell through. He found himself doing manual labor in the sweltering Arizona sun for little pay.

“I thought I was going to have a great job,” he said. “Instead, I’m sandblasting paint off the highway. There just weren’t a lot of wraparound services for Veterans for employment and transition back then. My struggle was hard getting out. Was it personal? Yes. So, if I can help others with their transition, or help when they’re out, that’s the best job to have.”

Cerda said the free tickets were a great treat. He separated from the Navy after four years working as a hull maintenance technician, and now works two part-time jobs while going to school for a degree in journalism.

“It’s a great feeling knowing people care enough to give these tickets and, as a Veteran, you can go out and have a good time with your family,” Cerda added. “Most people who use it can’t afford to go to these events any other way. They’re about Veterans helping Veterans. Whenever I meet people, I give them the web site info and tell them to sign up.”

Cerda said he’ll still hope and dream to get back to the big game if his beloved Chicago Bears ever make it back. But if not, he’ll never forget his Super Bowl experience.

“Just walking up and seeing the stadium and all the signs with ‘Super Bowl this,’ and ‘Super Bowl that,’ and then walking inside the stadium with all those people,” Cerda said. “The best part was the game was a real nail-biter right down to the end. You could feel the possibility in the stands with the Bengals fans screaming and yelling with the penalties at the end.

“The whole thing felt pretty amazing. I was actually at the Super Bowl. Told my brother afterward that it was so cool, but it felt like it didn’t happen. It almost felt like a dream. But shoot, they say a picture is worth a thousand words, and I’ve got pictures for my proof I was there.”

Vet Tix has so far given away 11,365,450 tickets to 130,807 events. Active duty service members and Veterans can learn more about the sign up process at vettix.org.