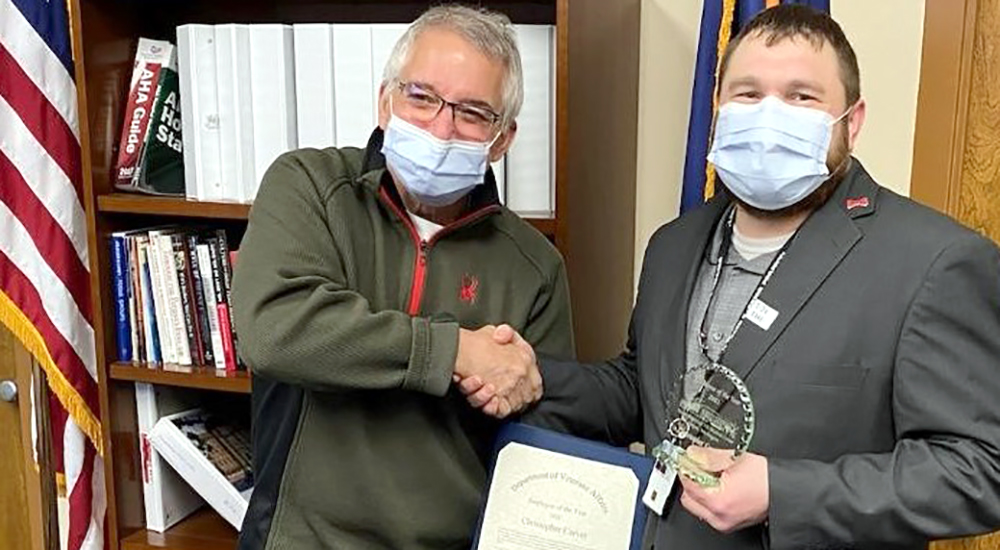 Christopher Carver talks the talk, with a smile. He also walks the walk, but with a limp, a slight hitch. Still, he doesn’t let his disability slow him down. After all, he earned it and is using it to succeed in life.

Some 20 years after joining the Army on 9/11, Carver’s heart and commitment to serve his fellow Veterans, along with his professional know-how, has earned him the honor of being named 2021 Employee of the Year for Spokane’s Mann-Grandstaff VA.

The journey home from combat overseas was anything but easy in 2007. “I went from a patient nobody expected to live to becoming a therapist and now working alongside the very same people who helped motivate and train me to serve my fellow Veterans at VA,” Carver said. “In the Army, I was taught to always continue to improve my fighting position.  I carry that ideal into all aspects of my life.”

“The Army taught me to improve my fighting position.”

Carver is the medical center’s Military 2 VA (M2VA) specialist serving hundreds of Veteran patients seeking to navigate the health care system. He also helps them to learn how to fully utilize their earned benefits.

Carver was a recon squad leader for the Army’s 25th Infantry Division, and he deployed to both Iraq and Afghanistan. While on a mission, his vehicle struck an Improvised Explosive Device. The explosion launched the truck and its crew 25-feet in the air, flipping and crashing down on top of Carver and his team.

“My gunner lost his arm, another squad member was severely wounded, and another walked away from it all,” he said.

Doctors at the Landstuhl Medical Center in Germany called his pregnant wife and parents to fly from Spokane to Europe to say their last good-byes.

Carver would remain in a coma for two months. Later, he was transferred to VA’s Poly-Trauma Center in Palo Alto, California. There, the family opted to try a device (not approved in the U.S.) called a Nova-Lung. The device circulates oxygen throughout coma patients’ bodies.

“I woke up in July of 2007 at the brain injury center at the VA hospital in Palo Alto,” Carver said. “I spent almost a year there. Once, the doctors allowed me the use of a walker to witness the birth of my first daughter.”

He had to learn to walk, talk, eat, sit up and take care of himself all over again. He credits his wife Laura for her unwavering support, including working full time while he was a stay-at-home dad.

After graduating from Eastern Washington University with grades that placed him on the Dean’s list, he worked for the Wounded Warrior Program. Then his dream job came along.

“I want to give back through VA.”

“I took a job at the Mann-Grandstaff VA where I had spent so much time as a patient,” Carver said. “Now I am helping Veterans get VA services. While I did not have the professional knowledge, I had the firsthand experience as a patient. I had been able to go through this huge life event and walk out the other side. Now I had a chance to show others how to do the same thing. I want to give back to the world that has done so much to help me at a time when I was down and needed someone there to help me. This experience has changed my view of the world. My family, my VA care teams, social workers and my fellow Veterans make all the difference, and now I want to give back through VA.”