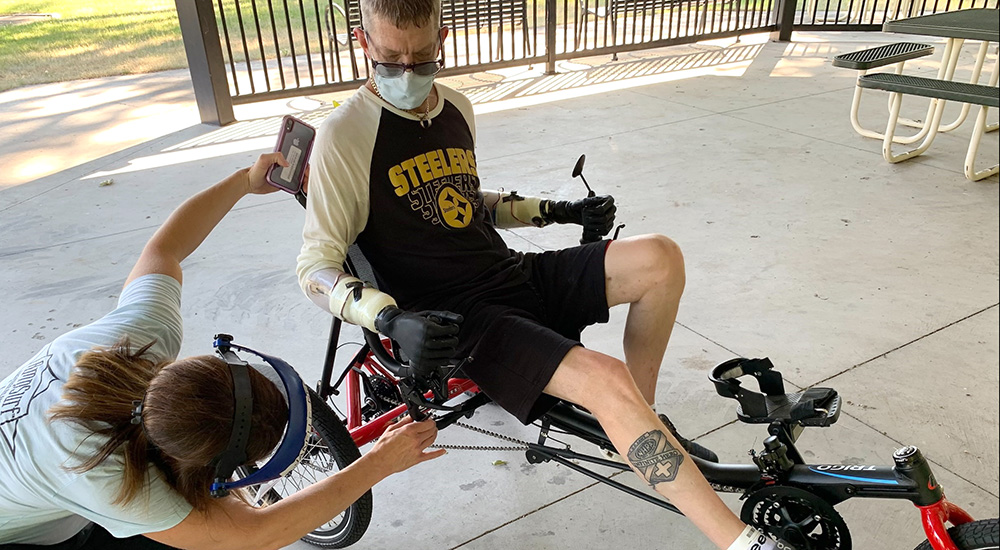 He was recovering from bilateral transradial amputations and numerous surgeries to address severe chest, torso and face injuries sustained in an explosion in his home.

From day one, his occupational therapist (OT) noted his problem-solving skills and took on the challenge to help him conceptualize all that was possible. Through varied educational strategies and a focus on return to his preferred life activities, the OT team and Ryan collaborated.

They wanted to find creative ways to use his residual limbs, customize adaptive equipment, and incorporate assistive technology such as voice command “Smart Home” tools to meet his unique needs and goals.

Modifications for a transition home

Videos of his home over 200 miles away were used to identify various modifications to support a successful transition home. Psychosocial factors were addressed through education on support group options and the Amputee Coalition’s peer visitor program.

When he was ready for bilateral body-powered prostheses, the upper extremity exercise program they had put in place paid off. Ryan and the OT came at the prosthetic training with the same collaborative, action focused problem solving and he was quickly using them to practice activities like writing and cooking.

Prostheses training pays off in the kitchen

Ryan was discharged with follow up care from the Regional Amputation Center (RAC) and other hospital services. He was readmitted to the facility seven months later for training on bilateral myoelectric prostheses. Training by the amputation team OT and prosthetist allowed Ryan to operate the hands on his new devices by activating muscles in his forearms.

He learned to operate and rotate between four different grip patterns: A fist for grasping and carrying, index finger point for tasks like operating his phone, and two and three finger pinch patterns for more targeted fine motor manipulation.

Capitalizing on his motivation, with guided facilitation and training from the OT, Ryan was quickly utilizing the myoelectric prostheses to use utensils, zip his suitcase, shop in the store, and even pick up an eggshell off the ground during a cooking task.

At the same time, the OT partnered with the recreation therapist to support the Veteran’s leisure goals through exploration of adaptive biking and fishing equipment.

Since returning home, Ryan is spending his time cooking, remodeling his kitchen, and caring for his dogs and plants. He is looking forward to spring when he can ride his new adaptive bike, play yard games, and return to mowing his own lawn and the lawns of 5 of his neighbors.

While the entire PRC and RAC teams were critical to Ryan’s success, when asked specifically about the role OT played in his recovery, he noted how patient and kind they were. He mentioned how they presented new and innovative ideas while also respecting and including ideas he offered.

As we acknowledge April as Occupational Therapy Month, join us in thanking our VA OT practitioners for the difference they make in Veterans’ lives this month and every month.