After coma and COVID, Veteran returns to festival stage 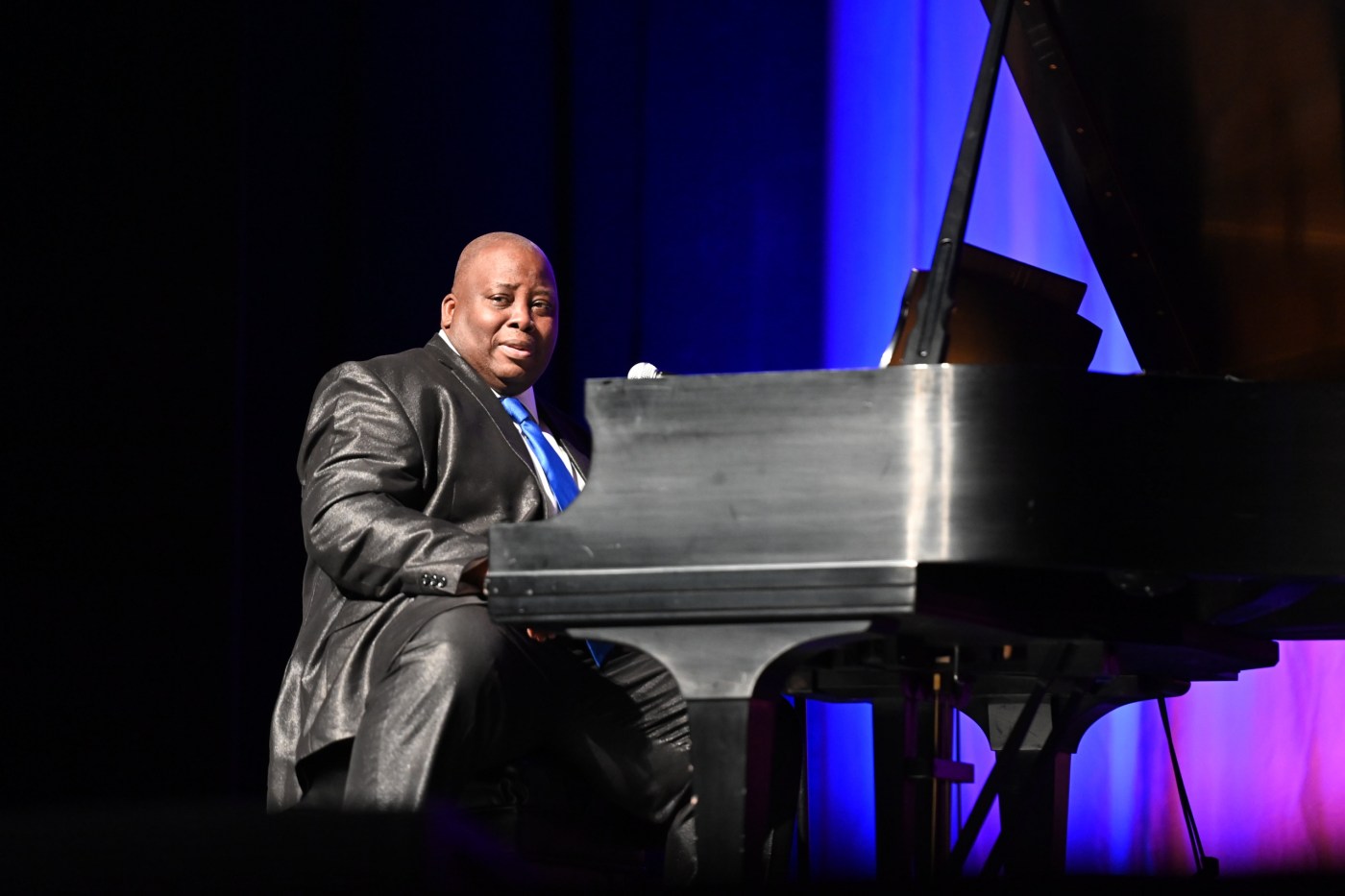 Jackie Williams remembers waking up from a coma on his way to the morgue. After battling COVID-19 for over six months, he was declared dead in August 2020.

Life before his coma was a forgotten memory. “I remembered faces but I couldn’t remember any details about people,” he said. He didn’t remember his wife, his children and many of the people and things he loved.

Over the next 18 months, the Army Veteran would relearn to walk, talk and breathe. Williams would also need to rediscover the power of love, family and music.

When Williams finally awoke from a coma, he was a shell of his former self, having lost over 140 pounds. Months of being on a ventilator meant he was unable to speak and, when it was removed, even simple conversations left him winded.

When his family brought him home, Williams noticed a keyboard in the room. “Who plays?” he asked his wife. “You do,” she said. “And you sing.”

Williams was a self-taught pianist, singer and six-time winner of the National Veterans Creative Arts Competition. His wife had to show him videos of himself performing to convince him. “I couldn’t believe it,” said Williams. “I just didn’t hear the music. She told me I had to sit down and play again, and I just didn’t want to.”

At his wife’s insistence, he practiced. “I don’t know what happened but finally I hit a chord. It was an e flat. I just kept banging on that. Then little by little, it started coming back to me and I had a song. My fingers knew where to go.”

When Williams returned to the West Haven VA, his music therapist reminded him about the National Veterans Creative Arts Competition. “I just didn’t think I was ready,” said Williams. COVID-19 had taken a toll on him, mentally and physically.

In his post-COVID music therapy sessions, Williams struggled to find his voice again. Months on a ventilator had left him with a hole in his throat, a scar he still bears today. While it took him days to speak again, it was weeks before he could sing.

“The hardest part was catching my breath when I was singing. COVID had taken so much from my lungs.” But with the encouragement of his wife, Williams found the motivation to practice. 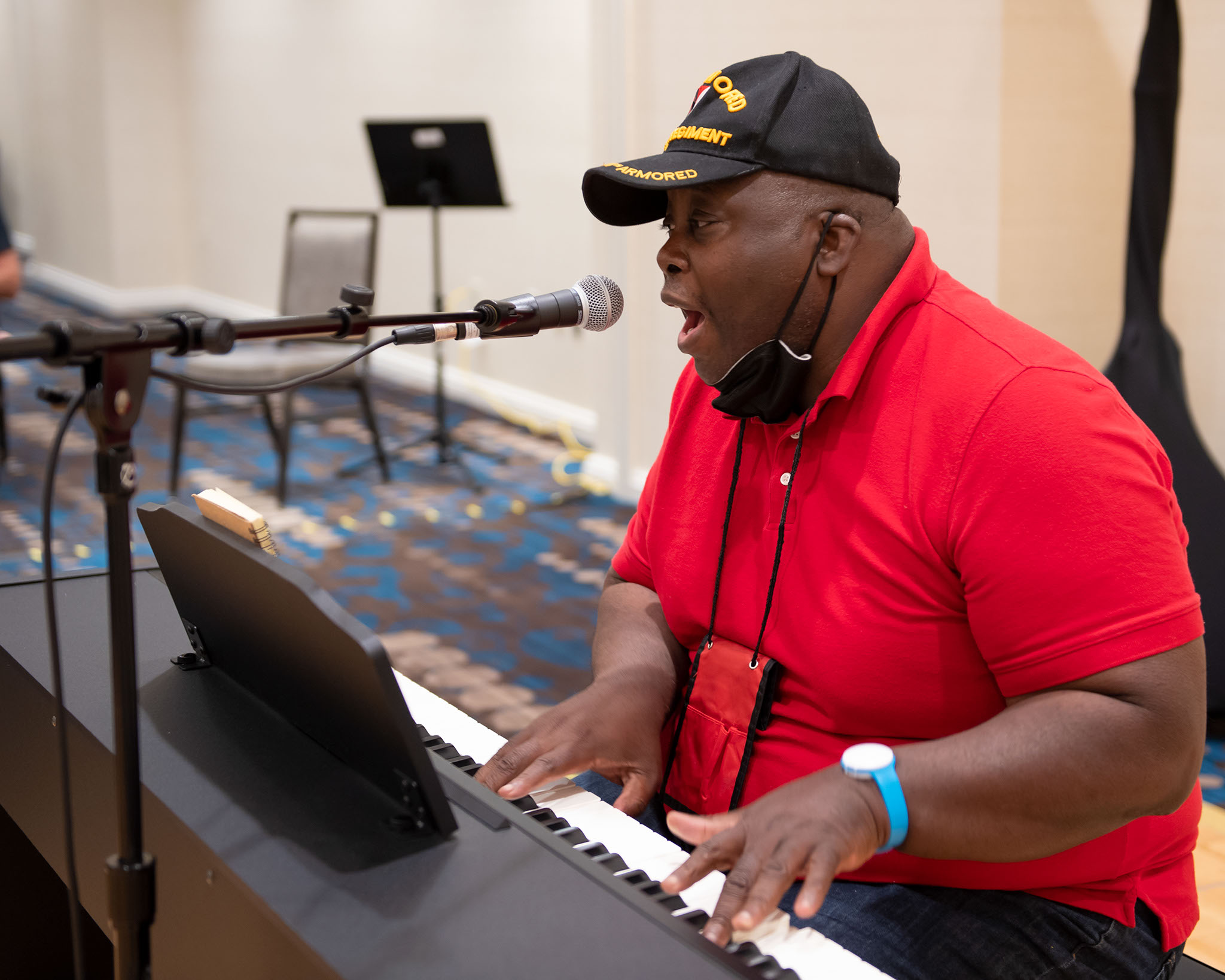 “I needed to do a better job bringing love to the world.”

While he still finds himself winded after a long or exerting song, his vocal endurance and range has improved to pre-pandemic levels.

Regaining his ability to play piano was a struggle and his biggest challenge was finding the courage to perform again. With the help of therapists, his comeback was in sight. Williams learned to play again. His wife and VA creative arts therapists encouraged him to get on stage and he decided to compete. All he needed was a song.

In the nightmares Williams endured during his coma, he believes God was speaking to him. “He had more for me to do here on earth,” he said. “I needed to make sure I was doing a better job of bringing love to the world.”

It was from another musician named Jackie that Williams got his song: Jackie DeShannon’s “What the World Needs Now is Love.”

With this song, Williams would win first place in the national competition and make his return to the National Veterans Creative Arts Festival.

“It was really healing for me to come to the event this year,” said Williams. “Everyone reintroduced themselves to me and reminded me what I meant to them and the festival. All the Veterans and artists, it’s like a brotherhood. It’s our military connection that brings us together but the music takes it deeper. It ties it to our soul.”

After a stunning rendition, Williams was greeted with handshakes and applause from his fellow performers. The man who had beat COVID-19 and cheated death had found his smile and music once again.

The National Veterans Creative Arts Competition & Festival recognizes the therapeutic role of the creative arts. Veterans who showcase their achievements in the festival are selected gold medal winners of national art, music, dance, drama and writing competitions in which thousands of Veterans enter from VA facilities across the nation.