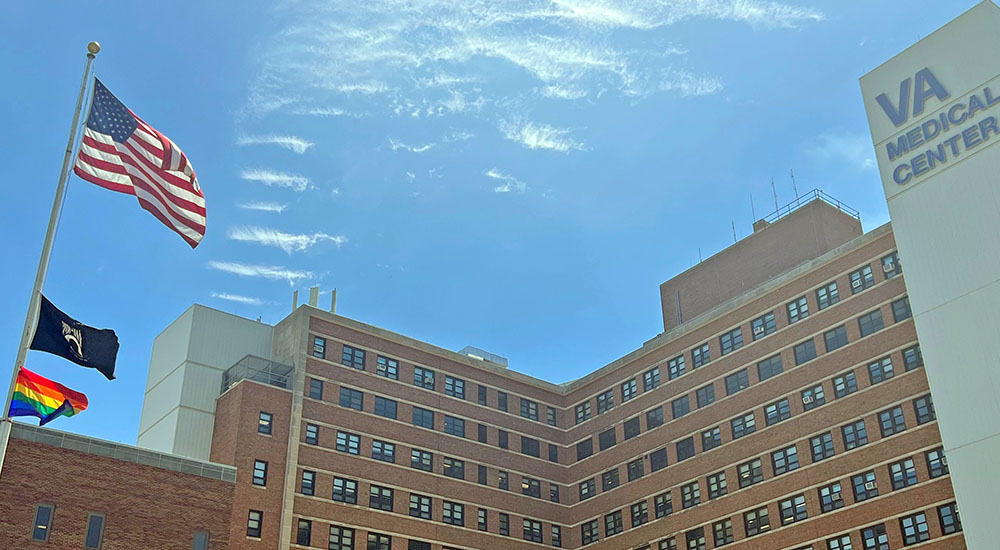 In May 2022, VA Secretary Denis McDonough authorized and encouraged VA facilities to fly the rainbow Pride flag for the duration of the month of June. This makes a clear statement to all Veterans that VA welcomes them and is committed to facilitating an inclusive health care environment.

Kansas City VA took action to secure a flag, invite the public, and schedule the occasion to raise the flag in early June 2022. Veterans and employees gathered around the center flagpole in front of the main building.

“At Kansas City VA, we hope, and we aspire to create a welcoming environment for all of our Veterans and staff,” said Medical Center Director Jean Gurga. “Each Veteran should be treated with dignity, with integrity and with respect. In an outward display of alliance with our Veterans and our employees in the LGBTQ+ community, we are raising the Pride flag at KCVA. This flag will fly through the end of the month in support of greater unity, visibility and equality for our LGBTQ+ Veterans and employees.”

As Gurga raised the Pride flag, Diversity and Inclusion Officer Dr. Sybil Wyatt spoke about the history of LGBTQ+ military service members, highlighting the historical challenges this group has faced due to early military policies that negatively impacted their service, such as “Don’t Ask, Don’t Tell.”

Wyatt also told of more recent progressive changes in executive orders, military policy,and Veterans benefits polices to address the unique needs of this Veteran population as these have expanded resource accessibility and visibility of this group of service members.

She added, “Just as we owe so much to cisgender and heterosexual service members, LGBTQ+ service members have not only sacrificed their lives for this country but for most of its history have had to serve in silence. During this Pride month, let us not forget the millions of lesbian, gay, bisexual and transgender Veterans who have served in the military. It is in their honor that we raise the Pride flag.”

Serving all who have served

Raising this Pride flag for the month of June is one way that Kansas City VA welcomes LGBTQ+ Veterans and employees while embodying the mission to serve all who have served.

By Calista Brown is a Navy Veteran and a marketing specialist at the KCVA.