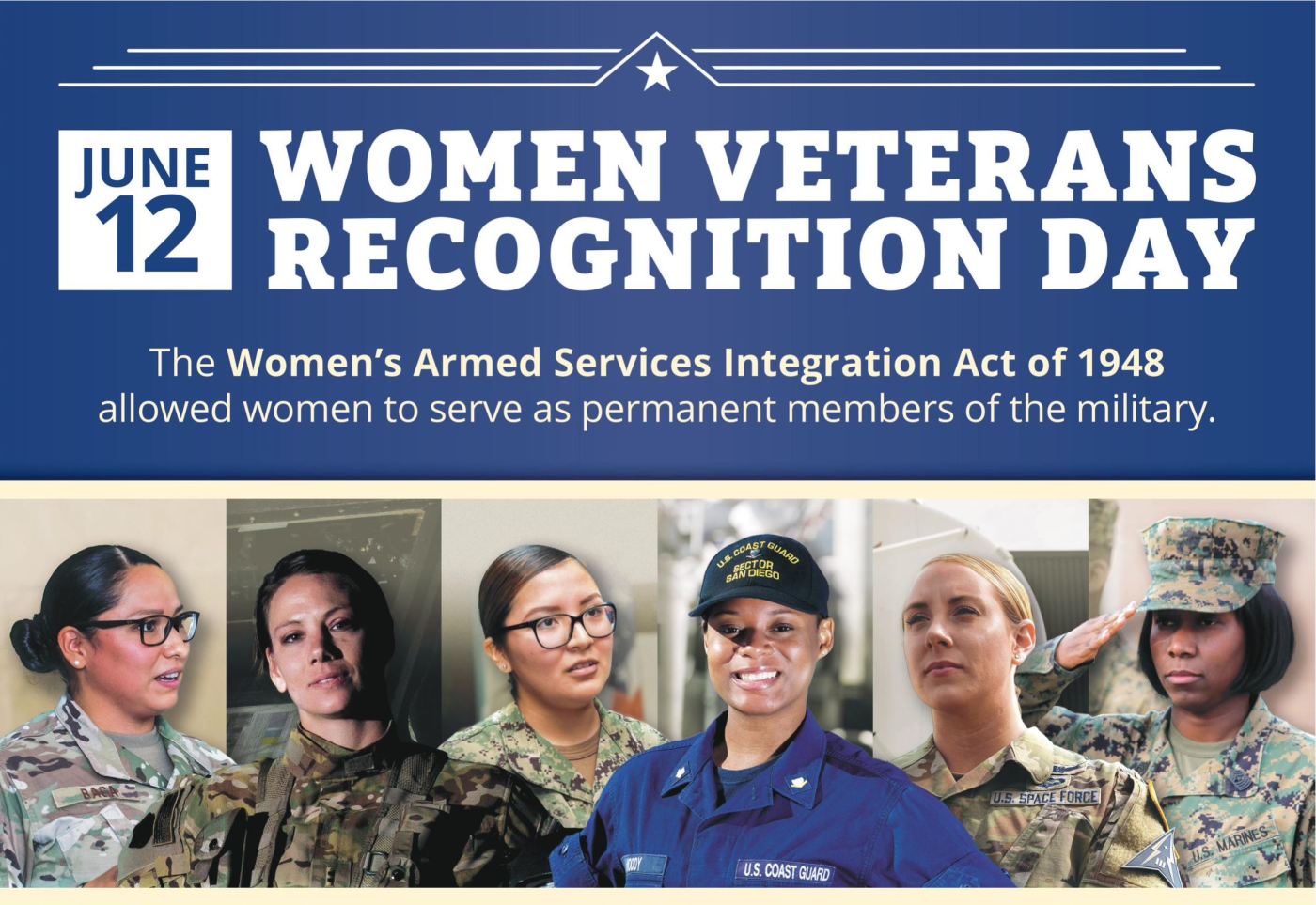 Women Veterans Recognition Day is not a separate Veterans Day for women. The day, celebrated yearly on June 12, recognizes, honors and remembers the signing of the Women’s Armed Services Integration Act (pub.L. 80–625, 62 Stat. 356), allowing women the right to permanently serve in the regular armed forces.

Women have served in America’s wars and conflicts throughout our history. They played vital roles in the Revolutionary War, serving as soldiers, raising morale and spying on the enemy. It is known that some even disguised themselves as men to be able to serve.

More than 400 women fought in the Union and Confederate armies during the Civil War. During World War I, about 35,000 women officially served. Women served in lifesaving roles such as nurses, and critical support staff roles such as the Hello Girls, formally known as the Signal Corps Female Telephone Operators Unit. In World War II, 350,000 women served in the U.S. military in occupations such as nursing, military intelligence, cryptography and parachute rigging.

In August 1943, the Women’s Flying Training Detachment (WFTD) and the Women’s Auxiliary Ferrying Squadron (WAFS) merged into a single unit for all women pilots and formed the Women’s Airforce Service Pilots (WASPs). They flew more than 60 million miles in two years. During this time, the 6888th Battalion was formed as the first and only all-Black Women Army Corps (WAC) unit to deploy overseas during WWII. Their nickname was “Six-Triple Eight” and their motto was “No Mail, Low Morale.”

Before the signing of the Women’s Armed Services Integration Act on June 12, 1948, only women nurses could serve in the regular and reserve forces during peacetime. All other women were sent home after each conflict. The signing of the Act deemed women essential to the war efforts and allowed them to serve in the regular armed forces full time. The Women’s Armed Services Integration Act, coupled with President Truman’s decision to desegregate the military, also permitted African American women to officially serve in the military, five years after the 6888th Battalion accomplished its mission of cleaning two years of mail backlog in three months, twice.  When women can, they do.

A day worth recognizing

June 12 proclamations and events around the U.S. each year commemorate the signing of the Women’s Armed Service Integration Act by President Truman in 1948. The date was first recognized as a commemorative date when the New York State Assembly declared June 12, 2008, to be Women Veterans’ Recognition Day.

We hope to see your state listed next year!

Today, women serve in all military occupational specialties, including logistics, munitions, intelligence, and many combat. Women contribute to the most professional, educated, agile and strongest military the U.S. has ever seen.

Despite their longstanding service, many women Veterans struggle to be recognized, respected and valued as Veterans in civilian life. After all they have done and continue to do, women Veterans deserve the support and respect they have earned through their service. They should feel like they belong at VA.

VA understands that women Veterans face specific challenges and have unique health care needs. Beginning in 1992 with the Veterans Health Care Act, VA has been providing gender-specific care to eligible women Veterans. Since then, we have been expanding those gender-specific services and launching initiatives to make women Veterans aware of their well-deserved benefits. We also continue to support our facilities across the country in fostering a comfortable, welcoming atmosphere for the women Veterans who come through our doors.

There is so much history about women Veterans to be told, and it’s important that women continue to be recognized for their service and sacrifice. On March 12, 2022, Public Law 117-97 was passed to award the Congressional Gold Medal to the members of the Women’s Army Corps who were assigned to the 6888th Central Postal Directory Battalion, known as the ‘‘Six Triple Eight.’’

If you are interested in your state recognizing Women Veterans Recognition Day, contact your local State Department of Veterans Affairs and/or Governor to find out the process for your state.