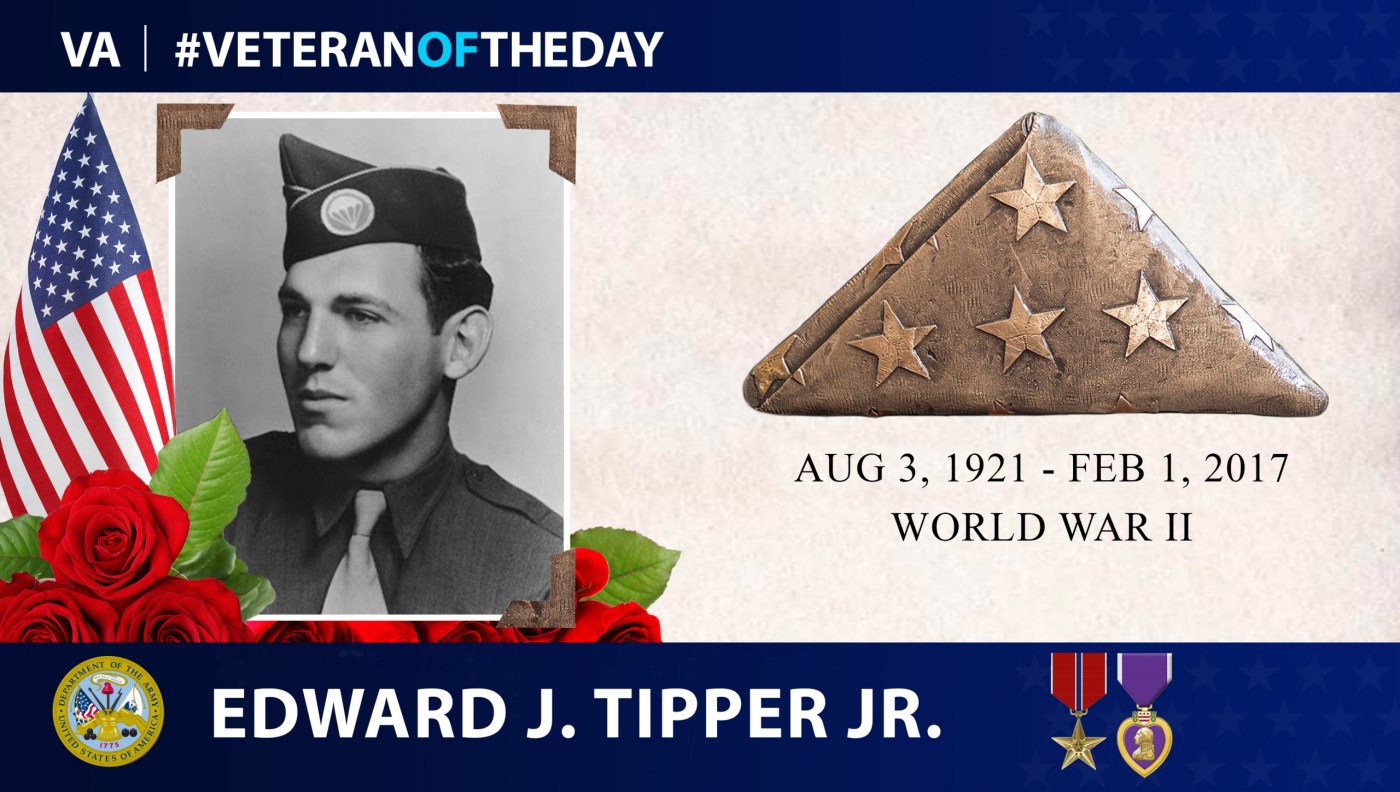 Today’s #VeteranOfTheDay is Army Veteran Edward J. Tipper Jr., a paratrooper and a member of the “Band of Brothers” during World War II.

Edward Joseph Tipper Jr. was born in Detroit, Michigan, in August 1921. He grew up during the Great Depression. He played football and hockey in high school and, after graduating, worked odd jobs in Detroit.

In December 1941, during World War II, Tipper was riding on a bus with friends when someone flagged it down to inform the passengers that Japan had attacked Pearl Harbor. Two weeks later, Tipper attempted to join the Marine Corps and defend his country. He was turned away from the Corps because of an overbite. Undeterred, Tipper then enlisted in the Army and became a paratrooper for the 506th Parachute Infantry Regiment, 101st Airborne Division (the “Screaming Eagles”). He believed that paratroopers were among the best, most highly disciplined soldiers in the Army.

“I didn’t mind getting killed so much,” Tipper said in an interview. “I was willing to be killed. I [just] didn’t want some goof-off guy to get me killed.”

After completing paratrooper training at Camp Toccoa in Georgia, Tipper was assigned to E Company (“Easy Company”), 2nd Battalion. Easy Company, comprised of 140 men, parachuted into France as part of the Allied invasion of Normandy on D-Day, June 6, 1944.

On June 12, less than a week after arriving in France, Easy Company was engaged in combat in the town of Carentan. Tipper was clearing a house when it was struck by a mortar round. The resulting explosion broke both of his legs, destroyed his right eye and left him with shrapnel wounds. Other members of Easy Company carried Tipper to a medical aid station, and he spent the next year in Army hospitals, recovering from his injuries.

After the war, Tipper returned to the United States where he used his G.I. Bill benefits to go to college. He studied English at the University of Michigan, then attended the Colorado State College of Education, where he earned a master’s degree. He landed his first teaching job in Iowa and then returned to Colorado, where he spent nearly three decades teaching English literature and running drama programs at several high schools in Jefferson County. After retiring in 1979, Tipper began traveling the world, met his future wife and started a family. He also enjoyed skiing and never let his wartime injuries affect how he lived his life.

“So much of what people talk about with him is what he did in the war,” said Tipper’s daughter, Kerry. “That was… really six days starting on D-Day. Teaching was 30 years.”

In 1992, historian Stephen Ambrose published the book “Band of Brothers,” which detailed Easy Company’s exploits during the war. The book was later adapted into a television series by HBO, in which Tipper was portrayed by actor Bart Ruspoli.

Tipper died on Feb. 1, 2017, at the age of 95. He was the recipient of a Bronze Star, a Purple Heart and the French Legion of Honor. He is interred at Fort Logan National Cemetery in Denver, Colorado.