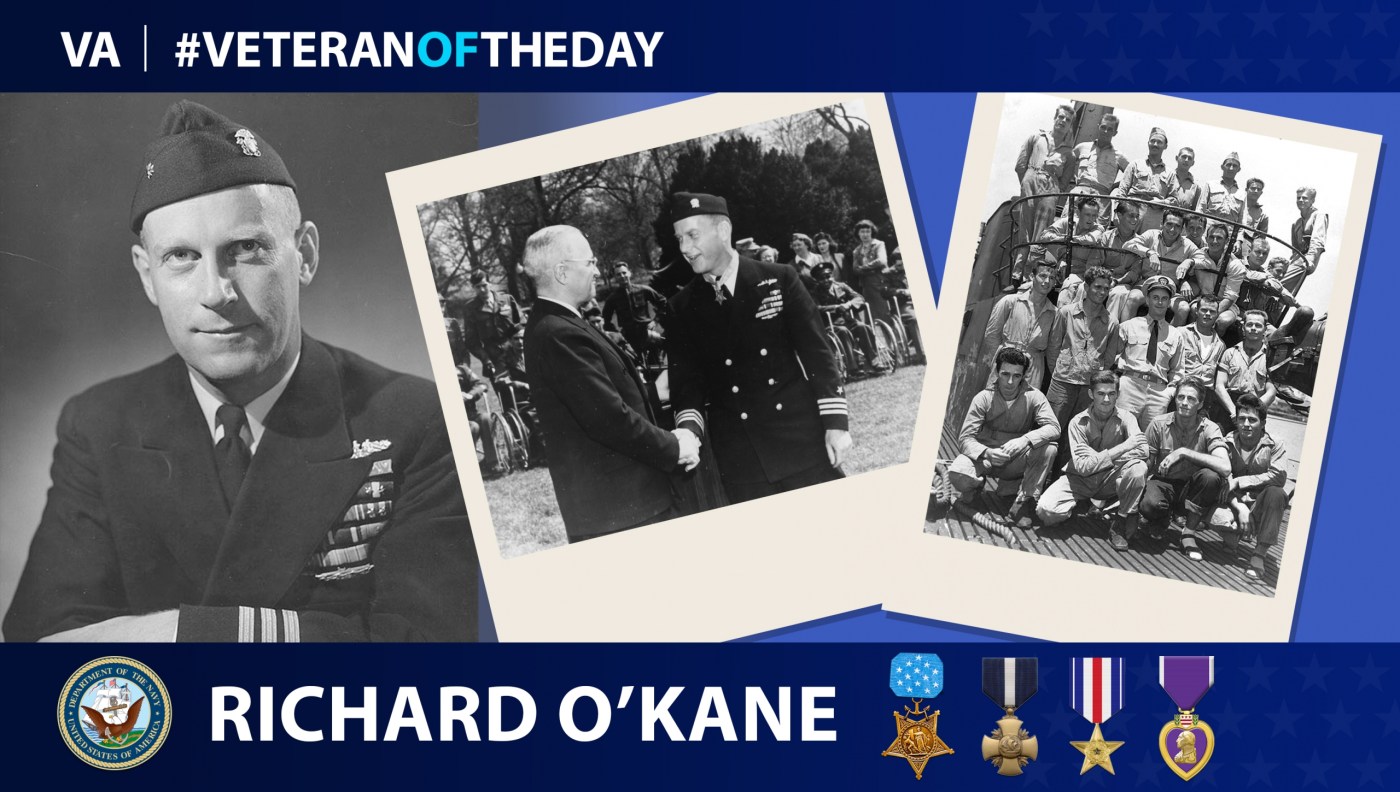 Today’s #VeteranOfTheDay is Navy Veteran Richard O’Kane, who served as a submarine commander and received a Medal of Honor during World War II.

Richard O’Kane graduated from the U.S. Naval Academy in 1934 and commissioned into the Navy. His first assignments were aboard USS Chester and USS Pruitt before he entered submarine training in New London, Connecticut. After training, he embarked on a four-year stint aboard USS Argonaut until he became the executive officer aboard USS Wahoo shortly after the U.S. entered World War II. Here, O’Kane served in five combat patrols.

In October 1943, O’Kane took command of the newly commissioned USS Tang. In the following months, he led four combat patrols in the Pacific Theater. On his first patrol, Tang sank five Japanese ships near the Caroline and Mariana Islands. His second patrol took him near Palau, where he led seven operations, saving 22 downed U.S. pilots. On his third patrol in the Yellow and East China Seas,he led his crew against Japanese forces, sinking 10 ships. Later, O’Kane and the Tang engaged with Japanese forces near Honshu. By then, his leadership helped establish Tang as one of the most successful U.S. submarines. Still, his story would only grow as Tang embarked on its fifth and final patrol.

In October 1944, O’Kane and his crew spotted a large Japanese convoy near the Taiwan Strait. Deciding to attack it in the night, Tang’s torpedoes hit three ships before evading two other ships attempting to ram it. Those ships collided, allowing O’Kane to fire torpedoes that sunk one of them. By morning, O’Kane spotted another Japanese convoy headed to the Leyte Gulf; he led Tang on its final attack. It fired multiple torpedoes that damaged numerous ships. As Tang fired its last two torpedoes, one hit an enemy ship, but the second curved back toward Tang. While O’Kane attempted to outmaneuver the rogue torpedo, it was too late as it struck Tang. Out of O’Kane’s 87-member crew, only nine survived, including himself. After its destruction, the survivors were captured by the Japanese and became prisoners of war for 10 months.

After the war, O’Kane received a Medal of Honor for his actions during Tang’s final patrol. Tang was officially recognized as having sunk 24 Japanese ships, totaling 93,824 tons. However, O’Kane believed the numbers were actually 33 ships, totaling 116,454 tons. Regardless, these numbers made Tang the most successful U.S. submarine operating during World War II.

Later, O’Kane testified at the trials for Japanese war crimes. He also continued his service in the Navy before retiring in 1957 at the rank of rear admiral.

O’Kane died in 1994 and is buried at Arlington National Cemetery.