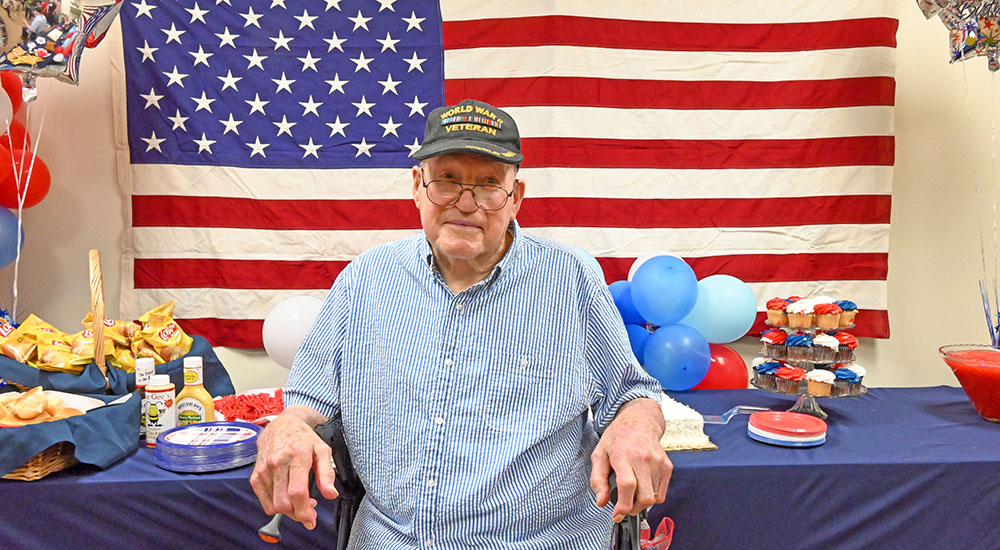 American Legion Post 255 presented Minor with a folded American flag and an Army flag. Because he is an avid angler, Cabela’s, an outdoor hunting and fishing company, donated a fishing box kit for his birthday.

“Well, I don’t really know,” Minor said when asked what his secret is to a long life. “I just love the Lord and he loves me. He’s what gives me a long life.”

His daughter, Zaneta (Zee), says he never drank alcohol or coffee, didn’t smoke and never really had any bad habits throughout his life.

Recalling his time in service, Minor says, “I had a good time. We were just trying to win the war and we did.”

Minor was drafted into the infantry in 1942, just months after getting married to the love of his life. He spent most of his time in service in Italy and Germany as a skillful mechanic. Due to his exceptional work ethic, General Alexander Patch selected Minor as his driver, a dangerous job as high-ranking service members are an enemy target.

After the war ended in 1945, Minor returned to his wife and family in Alabama.

He attended a school for electrical training in Birmingham and worked as a mechanic on large aircraft, and learned how to fly them to understand how to fix them better.

Minor and Ruby were married for 78 years before she passed away a few years ago. They had three daughters together and took them traveling as much as possible. Zee said her parents always made sure life was an adventure for them, so she makes sure her dad is still having an experience of some kind today.

For Minor’s 100th birthday, his family threw a party to celebrate him with 73 close family and friends in attendance. “Everyone loves my daddy, and love to see him still going on and loving life,” said Zee.

Minor would joke to his family every year while fireworks burst on the Fourth of July, “You hear that? Everyone is celebrating my birthday.”

To this day, Minor still loves to get out of the house and go fishing. He’s a man of few words but his spirit and attitude towards life speak volumes.

Enjoy a video of his birthday party.