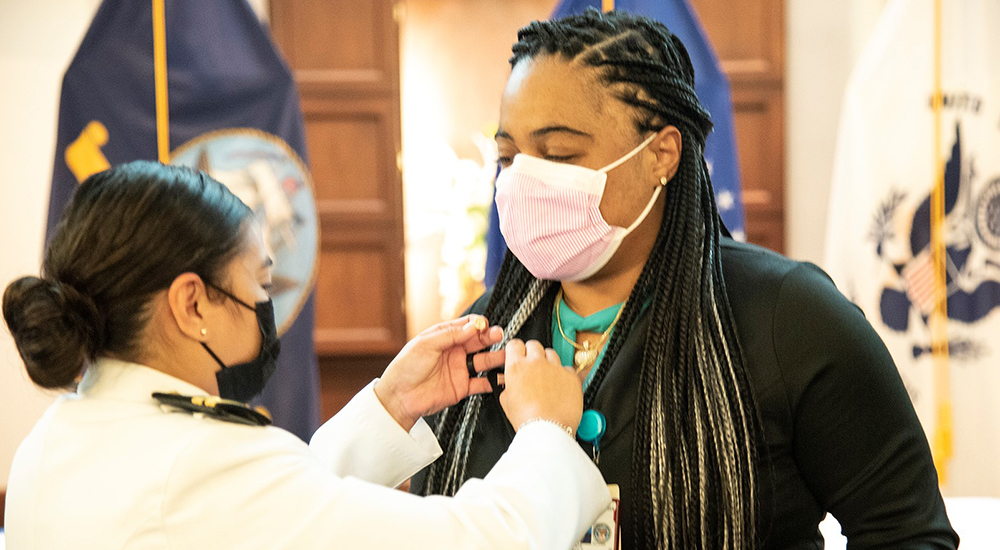 Two Houston VA nurses were honored with the Department of Defense’s Employer Support of the Guard and Reserve (ESGR) Patriot Awards.

Laterrica Stringfellow, RN, and Anjanai Butler-Wallace, RN, were presented with Patriot Awards at the hospital for their continued support of Milyn Parkinson, neurology department RN and a lieutenant in the Navy Reserve.

“These two nurse leaders have made it possible for me to serve in the Navy Reserve and keep my job serving Veterans at VA,” said Parkinson, who serves as the assistant nurse manager in the medical center’s Neurology Department. “They are 100 percent supportive every time I need to go on military training and they celebrate my military service every chance they get, even when it means I need to be away from my job to serve.” 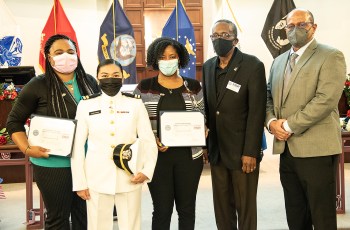 The Patriot Award is given to civilian supervisors nominated by a Guardsman or Reservist employee for directly supporting their service, according to Michael Rambaran, recruiter for the ESCR and award presenter.

“National Guard and Reserve members bring tremendous skills and capabilities to our workforce,” said Rambaran. “We so appreciate leaders like these two Houston VA nurses, who prioritize support for their military employees. By valuing their employees’ military service, they are directly supporting the sustainment of our all-volunteer force and our national defense.”

Parkinson says she feels she grew up as a nurse working at VA. She began her career as a licensed vocational nurse at the Michael E. DeBakey VA Medical Center 10 years ago and went to school to become an RN through the VA National Education for Employees Program (VANEEP). She is currently serving in her first leadership role at VA and has received word she will be going on a deployment soon.

“Serving Veterans is my passion.”

“Serving Veterans is my passion and working for VA has been a great experience for me,” she said. “I have learned so much over the years and now I get to apply that knowledge in both the Navy and at VA.”

Butler-Wallace, nurse manager of nursing unit 2A at the Houston VA, is Parkinson’s direct supervisor.

“Milyn is incredibly organized, independent and an overall great leader,” Butler-Wallace said. “She is a credit to the both the military and VA, and we are lucky to have her. I’m incredibly honored to receive this award, but it truly is my honor and privilege to support Milyn and her military service.”

Stringfellow, nurse executive for the neurology care line agrees. “Supporting Milyn, as well as other Guard and Reserve members here at the Houston VA is the very least we can do for those who protect and serve our country,” she said.  “Employees who serve in the military have a special bond with our Veteran patients. It’s a wonderful thing to see.”