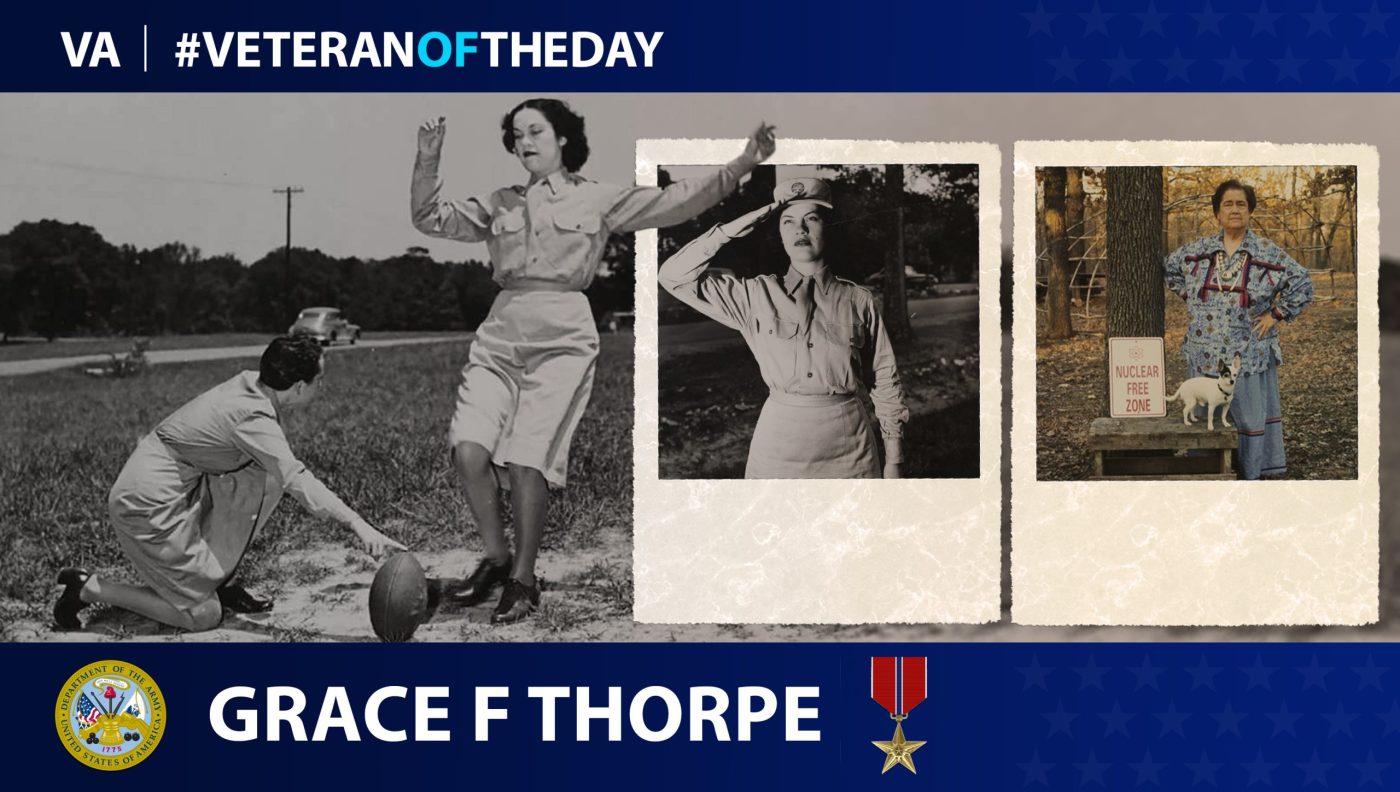 Grace F. Thorpe was born in Oklahoma in December 1921 to Iva Miller and Jim Thorpe. Her mother was Cherokee and her father was an Olympic athlete and member of the Sac and Fox Nation. Regarding her heritage, Thorpe was a direct descendent of the Sac and Fox chief, and her Native American ancestry also included the Menominee, Potawatomi and Kickapoo.

At the start of World War II, Thorpe felt that it was important to serve her country and contribute to the war effort. After briefly working in a factory for the Ford Motor Company, she joined the Women’s Army Auxiliary Corps program (WAAC) in 1943. After completing training at Fort Oglethorpe, Georgia, she served abroad in New Guinea, the Philippines and Japan. At the Battle of New Guinea, she received a Bronze Star for her service. In 1946, she worked for General Douglas MacArthur’s headquarters as a recruiter and staff interviewer in Japan.

Thorpe returned to America as a single mother of two, determined to become more involved in her Native American heritage as an activist. From 1968-1969, she served for the National Congress of American Indians. In 1971, she lobbied for Native American families on reservations. That same year, she co-founded the National Indian Women’s Action Corps to further empower and strengthen Indigenous family units and Native women. In 1974, she became a congressional intern in South Dakota for Senator James Abourezk and a legislative assistant for the Senate Select Committee on Indian Affairs.

Directing her attention to education, Thorpe earned a bachelor’s degree from the University of Tennessee and a paralegal degree from the Antioch School of Law in Washington, D.C. She graduated at 58 and continued her studies at the Massachusetts Institute of Technology as an Urban Fellow, then completed Master of Business Administration coursework at Northeastern State University.

Regarding her environmental activism, Thorpe was able to protect the Sac and Fox tribe lands by having them removed from the Department of Energy’s Monitored Retrievable Storage (MRS) program through her research efforts on nuclear waste hazards and funding. She also became president of the National Environmental Coalition of Native Americans (NECONA), helping to educate tribes of the dangers of nuclear waste and more.