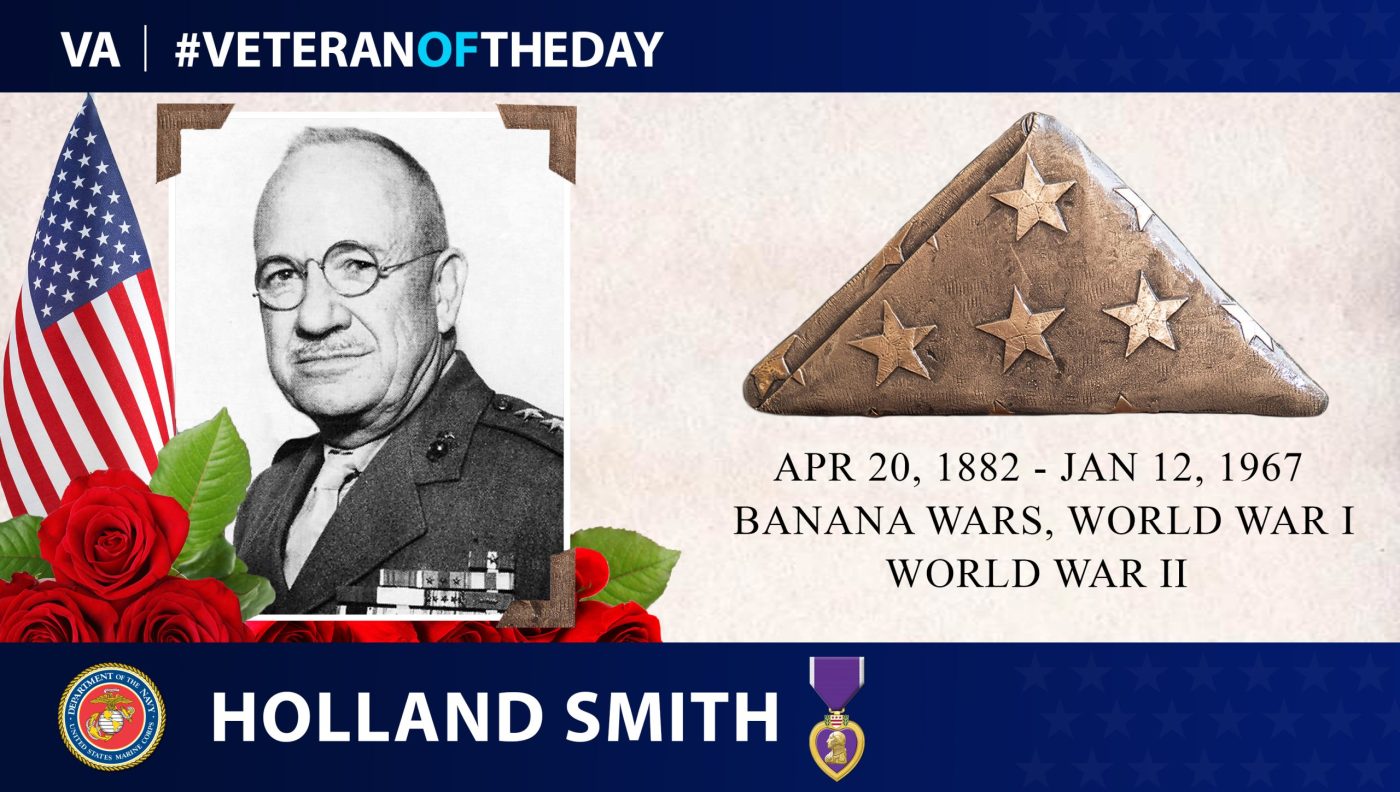 Holland McTyeire “Howlin’ Mad” Smith was born in April 1882 and grew up in Alabama. He graduated from high school in 1898 and attended Alabama Polytechnic Institute (API), now known as Auburn University. After receiving his degree from API, Smith enrolled in law school at the University of Alabama and also joined the Alabama National Guard. He practiced law for a short while before pursuing a military career.

Smith began officer training at the School of Application in Annapolis, Maryland. He completed training in 1906 and deployed to the Philippines where he commanded Company A of the 2nd Marine Regiment. This unit was tasked with fortifying the defenses on the Bataan Peninsula. Smith earned the nickname “Howlin’ Mad” from his men due to his command style and loud, profane language. He returned to the U.S. to recover from malaria. In 1909 he married Ada Wilkinson and they had one son together.

After his recovery, Smith deployed to Panama and Nicaragua, before returning to the Philippines. He also served as the commander of the Marines onboard USS Galveston, which was stationed near the Philippines.

In 1916, Smith deployed as part of a Marine detachment to aid in the U.S. occupation of the Dominican Republic. After peace was established, he served as the military commander at Puerto Plata in the Philippines.

When the U.S. entered World War I in 1917, Smith was recalled stateside, and within months was on his way to France as the commander of the 8th Machine Gun Company of the 5th Marine Regiment. He attended the Navy War College in Rhode Island during the interwar period and was stationed at Marine bases at Quantico, Virginia; Philadelphia, Pennsylvania; and Washington, D.C. In 1939, he was promoted to brigadier general and took command of the 1st Marine Brigade. In 1941, he helped found the Amphibious Force for the Atlantic Fleet, which provided amphibious assault training for multiple military units. In 1942, he helped train the Amphibious Corps for the Pacific Fleet. He also aided in the planning for the invasions of Tarawa and the Gilbert Islands.

Smith retired from active duty in May 1946. He died in 1967 and is buried at Fort Rosecrans National Cemetery in San Diego, California. Marine Corps Camp H. M. Smith in Hawaii is named in his honor.