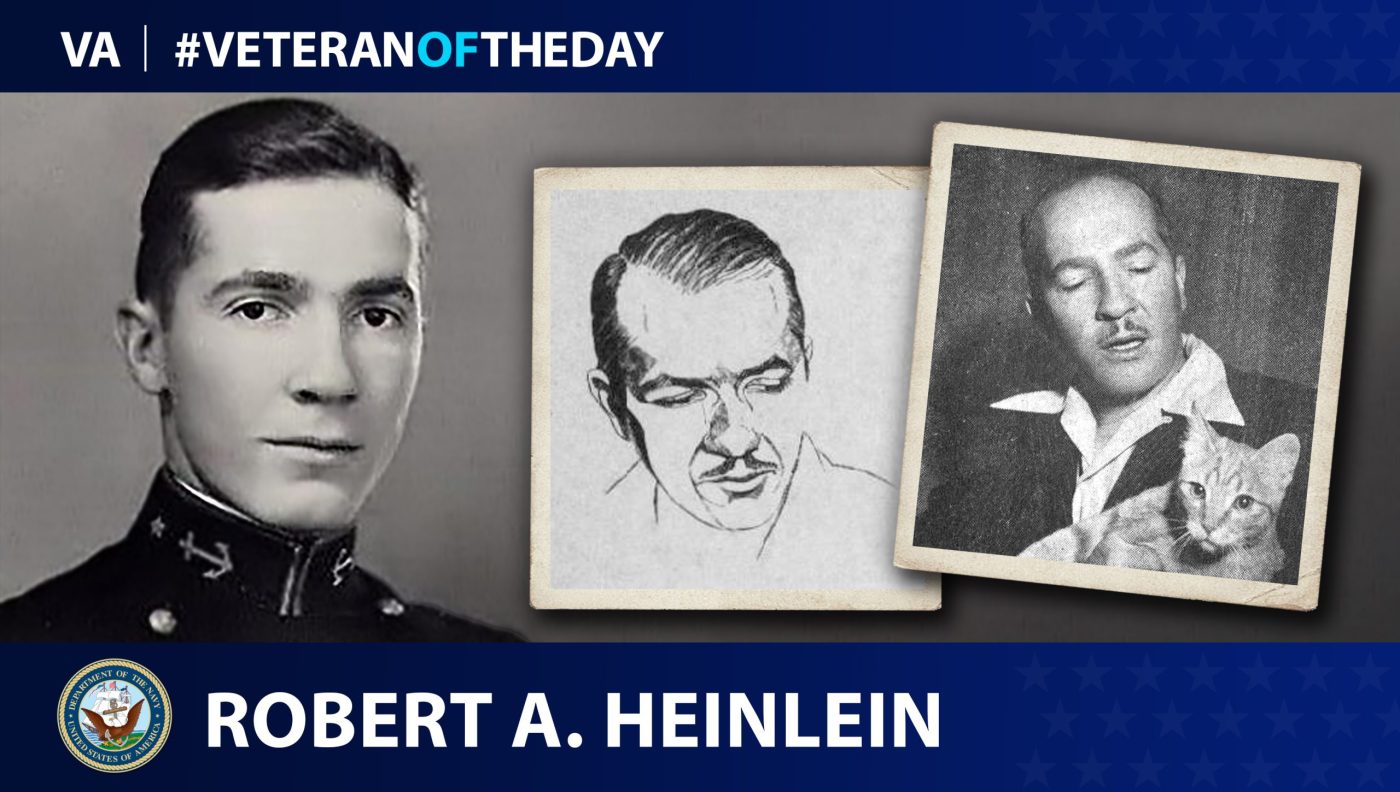 Robert Anson Heinlein was born in Butler, Missouri, in July 1907. The arrival of Halley’s Comet in 1910 sparked his lifelong interest in astronomy, and by the time he entered high school in 1920, he had read every book on the subject available at the Kansas City Public Library. Heinlein was also an avid reader of science fiction and was influenced by authors such as H.G. Wells, Jules Verne and Edgar Rice Burroughs.

Heinlein served in the Junior Reserve Officers’ Training Corps (JROTC) in high school and enrolled at the U.S. Naval Academy in 1925. He graduated in 1929 with the equivalent of a bachelor’s degree in naval engineering and was commissioned as an ensign. He served as a radio operator aboard the USS Lexington until 1932, then transferred to the destroyer USS Roper. Life aboard Roper was difficult for him; the constant rocking of the ship gave him chronic seasickness, and in 1933, he came down with tuberculosis. Although he survived, he was medically discharged from the Navy in 1934 with the rank of lieutenant.

Heinlein then tried several other careers, including silver mining, selling real estate and entering politics; none were successful. In 1939, he wrote his first short story, “Life-Line,” submitting it to the pulp magazine “Astounding Science Fiction.” Heinlein’s story was accepted, beginning a writing career that lasted nearly five decades. By the 1940s, he had become one of the leading writers in the science fiction genre.

After the United States entered World War II, Heinlein attempted to reenlist in the military but was rejected for medical reasons. Instead, he became a civilian engineer at the Naval Air Experimental Station in Philadelphia, where he worked on high-altitude flight suits for pilots. He recommended that the Navy hire fellow science fiction luminaries Isaac Asimov and L. Sprague de Camp for their technical expertise—de Camp was an engineer and Asimov was a chemist—leading all three to work together in Philadelphia. He also wrote letters urging the Navy to pursue space travel, a responsibility that later fell to the Air Force and the National Aeronautics and Space Administration (NASA).

After the war, Heinlein returned to writing full-time. He was a prolific author; during his lifetime, he penned over 150 novels, short stories and articles. He submitted his work under at least half a dozen different pen names because the magazines of his day were reluctant to publish multiple stories by a single author. Several of his works have been adapted for film, television and radio, and he was a six-time recipient of the Hugo Award, the top prize in the field of science fiction.

Heinlein died on May 8, 1988, at the age of 80. In recognition of his advocacy of space exploration, he was posthumously awarded a NASA Distinguished Public Service Medal. The citation for this medal described him as “a man dedicated to encouraging others to dream, explore and achieve.”