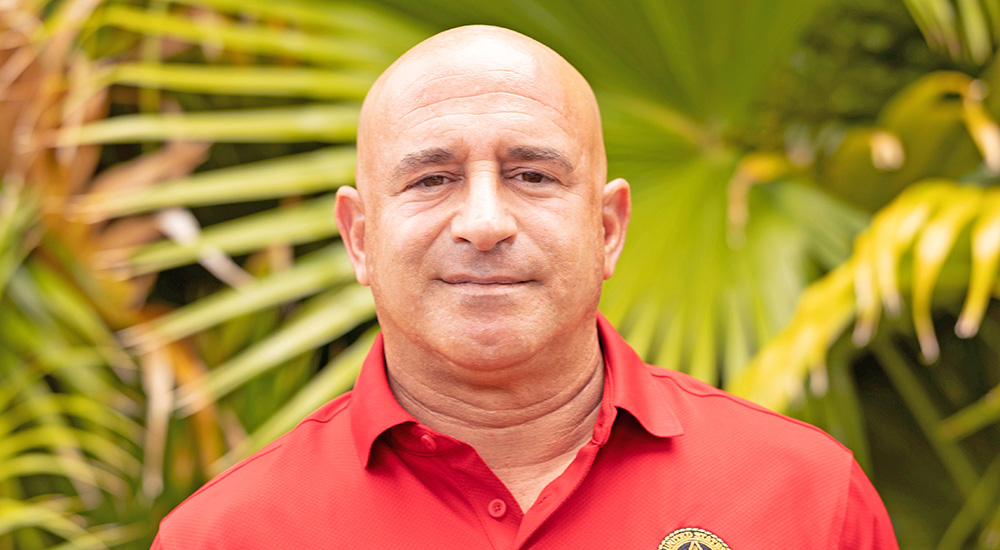 Retired Army Reservist Greg Amira is many things: a survivor from the attack on the World Trade Center, a Purple Heart recipient from his deployment to Iraq, and a proud father of a daughter he recently walked down the aisle.

Last week, while at the VA Hospital in Tampa, Florida, Amira saw something that caught his eye. It was a banner for the “Million Veteran Program.” He stopped to ask a few questions. Fifteen minutes later, after going through the consent process and giving a small tube of blood, Amira became the 900,000th Veteran to join VA’s largest research program ever.

He walked out of the hospital later that day with the sleep apnea equipment he had been prescribed but he left behind an impact in health research that will make a difference for years to come.

Surviving the attack on the World Trade Center

When the first plane hit the World Trade Center, Amira was on the 44th floor, stopping for breakfast before going up to his office on the 73rd floor.

Amira called his wife as he came down the stairwell, but he lost cell service. For hours, she and his daughter feared him for dead. When Amira made it to the lobby, he turned back to help first responders with search and rescue.

Amira, after the attack on the World Trade Center

“You run to the catastrophe, it’s just instinct,” Amira said. As a Reservist, he felt it was his duty to help others, a duty that still drives him today. Eventually, Amira made it out alive, but he suffered debilitating back and neck trauma, including shards of shrapnel that pierced his body. The worst were his brain injuries which doctors would later diagnose as TBI.

Little did he know, this was just the beginning of his story.

Recalled to the frontlines

Five years later, in 2006, Amira received a letter from the US Army Special Operations Command. He was recalled to the 402nd Civil Affairs Battalion to deploy in support of Operation Iraqi Freedom.

Despite being on permanent disability from his civilian career since the events on 9/11, the Army Reserve had placed him in the Individual Ready Reserve. He had two choices, deploy or resign, the latter of which was never an option.

It was one of the deadliest years of the war when he landed in Iraq. “I was tasked with basically helping people meet with business leaders and local politicians and trying to rebuild,” Amira explained. He used his background from Wall Street to help build back the Iraqi economy, one business at a time.

Then, just weeks before coming home, his convoy was struck by an improvised explosive device, or IED. “It was a devastating IED meant for a tank,” remembers Amira. He leapt from his vehicle to try and rescue those in the Humvee that was directly hit, including his company commander who died in the attack.

Due to his actions and his injuries, Amira was awarded a Purple Heart. When he finally returned home a few months later, he spent more than a year rehabilitating in the Warrior Transition Battalion at Fort Bragg, North Carolina.

Turning pain into purpose and service

Amira’s wounds from 9/11 and Iraq are not readily visible to others, but he carries them every day and lives with the effects of his brain injuries and others sustained in the IED attack. He resettled in the Tampa area to be near the James A. Haley VA Hospital, which offers some of the best care in the country for traumatic brain injury (TBI).

Now he focuses on giving back any way he can, whether it’s helping a friend on the weekend with a piping issue in their sprinkler system or standing up a non-profit to support fellow combat wounded Veterans.

“That’s usually what I look for, if it’s going to help somebody else,” said Amira, who explained why he joined the Million Veteran Program (MVP). The coordinator said, yes, his one-time enrollment would only take a few minutes and would help researchers better understand disease in Veterans.

He rolled up his sleeves, as he’d done so many times before, and was ready to do his part.

Make a difference for Veterans like yourself. Join the Million Veteran Program today.

Thanks to Amira and now more than 900,000 Veterans in the Million Veteran Program, we understand certain health conditions better than we ever have before. This is just the beginning of what our research has to offer.

Already, data from Veterans in MVP have supported the largest genetic studies to date on posttraumatic stress disorder (PTSD), major depression, heart disease, and nonalcoholic fatty liver disease, one of the most common forms of chronic liver disease in the United States.

The goal of MVP’s research is for Veterans to one day be able to visit their doctor and get the right screenings at the right time, or the right treatment based on their genes, medical history, lifestyle and military experiences.

To learn more and sign up, visit mvp.va.gov or call 866-441-6075. You do not need to receive VA health care to join VA’s Million Veteran Program.