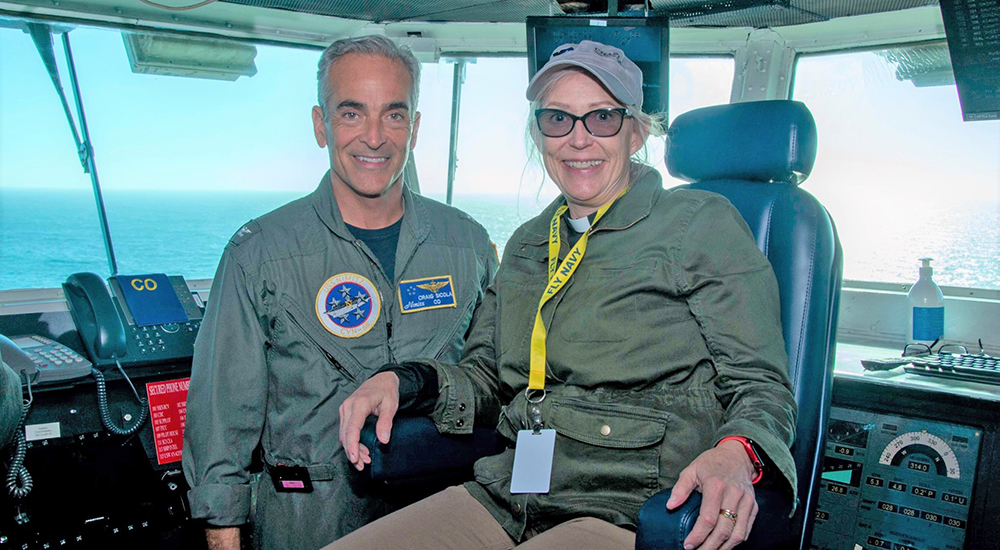 A VA chaplain’s experience aboard a Navy aircraft carrier gives her additional tools to provide comfort, support, counsel and education to the nearly 200,000 enrolled Veterans at the Dallas VA.

Chaplain Patricia Roberts’ two-day Distinguished Visitor invitation gave her a unique perspective of the modern-day active military force, their duties, sacrifice, and how to contribute to their needs as future Veterans and users of VA health care.

“I have a newfound appreciation for the young men and women aboard those ships,” said Roberts. “I was especially in awe of all the women sailors I saw on the USS Nimitz, which matches up with the fastest growing Veteran population seeking services in VA health care. The experience was very intense and eye-opening. It is one I will never forget.”

As Dallas VA’s Chief of Chaplain Service, Roberts recently got her chance to do just that as a participant in the highly selective Naval Air Forces’ Distinguished Visitor Embark Program aboard the USS Nimitz via Naval Air Station North Island.

“I hadn’t heard of the program before I was nominated, but was very honored to be selected to see and learn first-hand how the Navy is contributing to the security of the United States and our global allies,” said Roberts.

“Wish we could invite every American to join us at sea.”

The program’s mission is to foster awareness and understanding of the Navy, the role of carrier aviation, and demonstrate the high-level training and quality of sailors ready to meet to the nation’s needs.

“While we would like to invite every American citizen to join us at sea to watch their Navy in action, that isn’t possible,” said Vice Admiral Ken Whitesell, Navy Commander Naval Air Forces. “We do hope those who have been invited to embark will share their experiences with others and educate the public on the Navy’s global missions.”

For Chaplain Roberts, a special souvenir from the adventure was a photo of her on the bridge with Captain Craig Sicola, Commanding Officer, of the USS Nimitz.