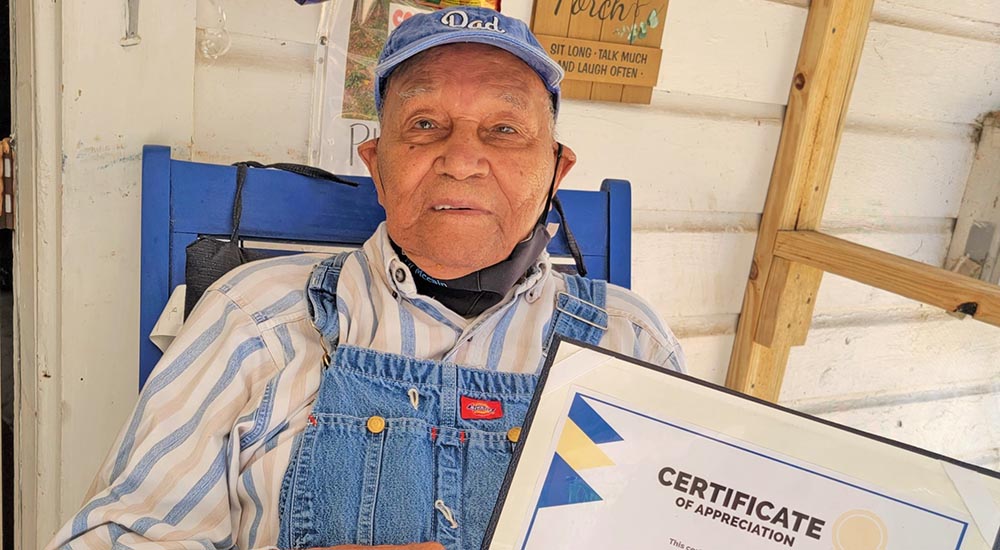 Exiting the air-conditioned car, the heat was like a slap to the face. Even at 10 a.m., the late July sun was showing no mercy in Longview, Texas. Army Veteran Hosea “Sugar Boy” McCain sat relaxing in his rocking chair on his newly screened-in porch.  Still elated from his birthday bash the weekend before, the 103-year-old was still smiling.

Behind that smile was a man with a story to tell. McCain was drafted in 1942 during World War II.

“I thought I wanted to go overseas. I wanted to go bad when the bombardier boys were shipped out,” said McCain. “For some reason the Army kept me here.”

Some may say Lady Luck was on his side. McCain never left Texas during the war. 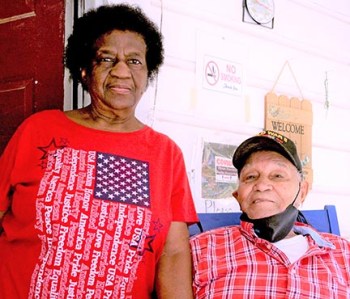 “The lord told me to get him.”

“I was a truck driver. I hauled whatever they needed. I also did what is called a line taxi. I carried troops to their planes for bombardier training. They had me go out where they practiced dropping bombs. I had to go pick up what they called bomb tails, empty fin assemblies, what was left, and bring them back in to get re-used.”

McCain’s skills did not stop at truck driving. He played baseball for the military during his time in service. “I was the catcher. I didn’t have to stand up to throw to second base. I would throw a man out sitting down. I had a good arm.”

In the last year of his enlistment, he got sick, but that didn’t stop him. He ran the service club on Midland Army Airfield located between Midland and Odessa, Texas. He ran the club until he got out of the service in 1946. As soon as he got out the Army, he started receiving his medical care with VA.

“I’ve been going to VA since 1946. They take good care of me and they understand Veterans,” he said.

McCain never slowed down. He worked for Lonestar Steel for 20 years. In the 1960s, he built the house he lives in today on 65 acres of land. He was born and raised just a mile from his house. He loves the country and doesn’t mind driving 25 to 30 miles to the Longview VA Clinic for care.

McCain’s passion is in farming and raising cattle. He has worked the land for the majority of his life. He still makes his way to the pastures when he can. He also loves to hunt, trap and fish. He boasts that his biggest fish was an 85-pound catfish and that it was some good eating.

He does more than most people half his age. When asked what his big secret to staying so healthy, active, and young: “I’ll tell you what I tell everyone, there ain’t no secret to what God can do. I really don’t know what keeps me here. I never did smoke. I don’t drink, not even soda water. It is always milk or water.”

His diet consists of very little meat, lots of veggies, and of course his sweets. “I absolutely love the sweet stuff,” he said. His nickname since childhood is Sugar Boy for a reason: He will add sugar if it isn’t sweet enough.

McCain married his first wife after the Army in 1946 and had nine children. His boys all joined the military. He has been married to his current wife for 27 years. “The lord told me to get him and I did exactly what he told me,” said Mary McCain.

Sugar Boy rocked peacefully in his rocking chair. His eyes sparkling and his smile still plastered on his face. Hard work and a good diet kept him young. Being at peace with life and not letting anything bother him is the true secret to his youthful glow.