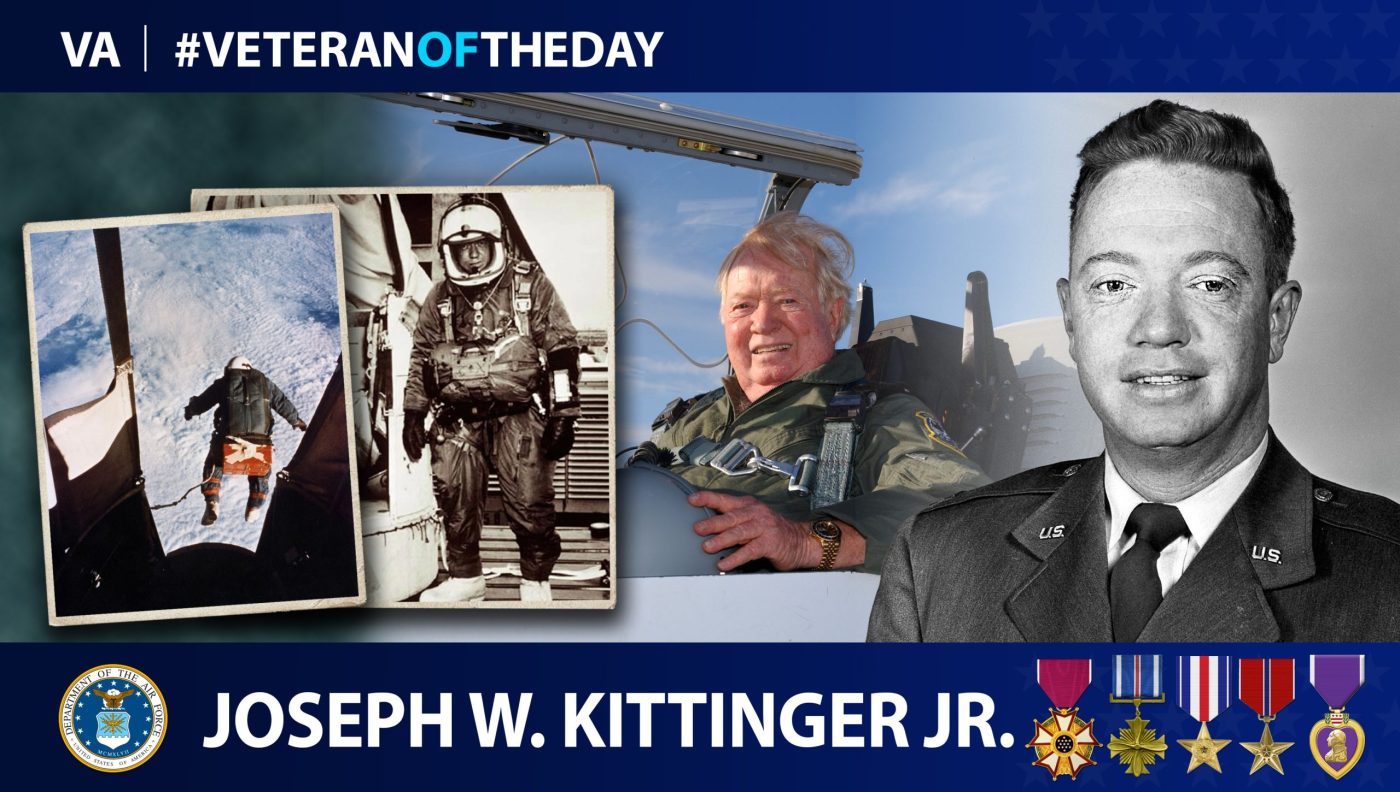 Col. Joseph William Kittinger Jr. is a decorated Air Force Veteran whose service career spanned 29 years, during which he participated in several pre-space race projects (Project Manhigh and Project Excelsior), and was a part of hundreds of flight missions during the Vietnam War.

Kittinger was born in Tampa, Florida, in 1928. From an early age, Kittinger was so fascinated with aircraft that he could solo flight in a Piper Cub when he was 17. After attending the University of Florida for two years, he was accepted into the United States Air Force aviation school at Goodfellow Air Force Base (AFB), Texas, in March 1949 as an aviation cadet.

Once he completed his aviation cadet training in March 1950, Kittinger received his pilot wings and was assigned as a fighter pilot with the 86th Fighter-Bomber Wing at Ramstein Air Base, West Germany, flying the F-84 Thunder jet and the F-86 Sabre. He was then transferred to the Air Force Missile Development Center at Holloman AFB, New Mexico, in 1953, where he flew experimental jet fighters and participated in aerospace medical research. In 1955, Kittinger was recruited as a test pilot for Project Manhigh, which involved studying the effects of cosmic rays from the Earth’s atmosphere on the mental and physical capabilities of humans in space-like altitudes. In 1958, Kittinger was assigned to the Aerospace Medical Research Laboratory at Wright-Patterson AFB in Dayton, Ohio, for Project Excelsior. The project’s goal was to put a man into space and test a person’s ability to survive extremely high-altitude bailouts, and Kittinger set a world record during a jump for the longest drogue fall. He also took part in Project Stargazer in 1962, where he and astronomer William C. White took an open-gondola helium balloon to perform astronomical observations for 18 hours.

Kittinger served three combat tours during the Vietnam War, where he flew 483 combat missions. During his first two tours, he was an aircraft commander in the Douglas A-26 Invaders and modified On Mark Engineering B-26K Counter-Invaders as part of Operations Farm Gate and Big Eagle. During his third tour, he commanded the 555th Tactical Fighter Squadron. He was shot down during a mission in May 1972, four days before being scheduled to return home. He was captured and sent to the infamous “Hanoi Hilton” prisoner of war camp in North Vietnam, where he spent 11 months. Eventually, he and his wingman, 1st Lt. William J. Reich, were returned to the United States during Operation Homecoming in 1973. They continued their Air Force careers, with Kittinger having been promoted to colonel while in captivity. Following his return, he attended the Air War College at Maxwell AFB, Alabama. Afterward, he became vice wing commander of an F-4 fighter wing in England. In 1978, Kittinger retired at the rank of colonel.

During his 29-year career, Kittinger accumulated 7,679 flying hours in the U.S. Air Force, including 948 combat flying hours from his three tours during the Vietnam War. In addition, he has flown over 9,100 hours in various civilian aircraft. He received several military awards, including two Silver Stars, a Legion of Merit with one bronze Oak Leaf Cluster, two Distinguished Flying Crosses for Projects Man High and Excelsior, a Purple Heart and a USAF Marksmanship Ribbon. He also received various civilian awards and honors, including a Joe the Harmon International Trophy (Aeronaut) for outstanding accomplishments in aeronautics, given personally by President Eisenhower in 1960, an Aeronaut Leo Stevens Parachute Medal, a John Jeffries Award for outstanding contributions to medical research, an Aerospace Primus Award, a National Aeronautics Association Elder Statesman of Aviation Award, an Order of Daedalians Distinguished Achievement Award, a Barnstormer of the Year Award and an FAI Montgolfier Diploma. Kittinger was also inducted into the U.S. Air Force Special Operations Hall of Fame and as a fellow in the Society of Experimental Test Pilots. After his long military career, he still participated in several flight ventures, including advising Felix Baumgartner during the Red Bull Stratos project in 2012.