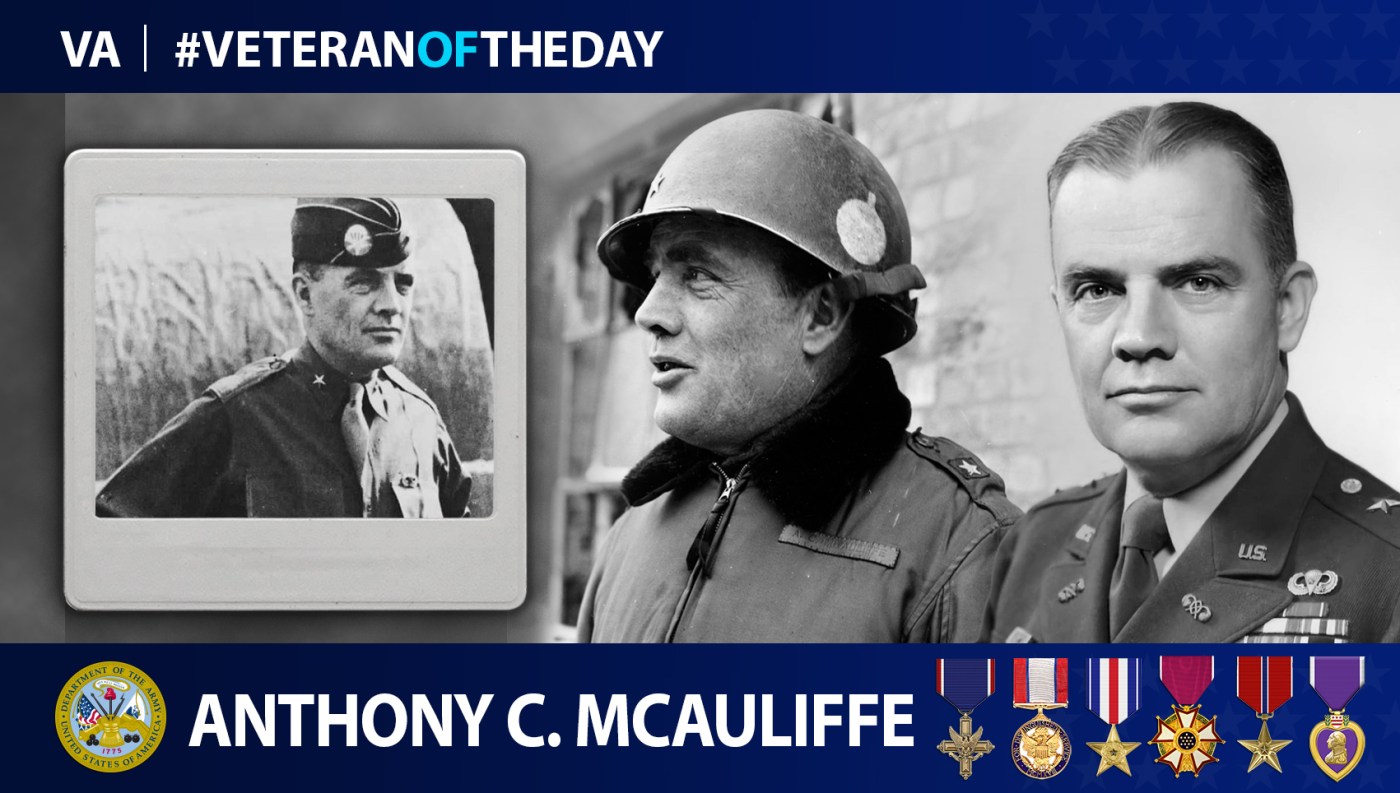 Anthony Clement McAuliffe was born in Washington, D.C. in July 1898. He attended West Virginia University in 1916, but when the United States entered World War I the following year, he transferred to an emergency wartime training program at the U.S. Military Academy at West Point. McAuliffe completed the program in November 1918, only a few days before the war ended, and chose to reenter the academy.

McAuliffe graduated from West Point in 1919. He then attended Army Field Artillery School at Camp Zachary Taylor in Kentucky, was commissioned as an artillery officer, and served in a variety of routine staff and educational posts. He attended the Army Command and General Staff School at Fort Leavenworth in Kansas in 1936, graduated the following year and served as an instructor at the artillery school at Fort Still in Oklahoma until 1939. In 1940, he was appointed to study race relations in the Army at the Army War College in Pennsylvania.

During World War II, McAuliffe served as an artillery commander in the 101st Airborne Division. In December 1944, during the Battle of the Bulge, McAuliffe—by then a brigadier general—commanded the 101st as it defended the small town of Bastogne, Belgium. German forces attacked Bastogne for days but were unable to capture it.

On the morning of Dec. 22, German messengers approached Bastogne and demanded that its defenders surrender to the German army, which had surrounded the town. Upon hearing of the German offer, McAuliffe, who had an aversion to swearing, reportedly muttered, “Aw, nuts.” While McAuliffe considered the proper wording for a formal reply, the men under his command suggested that his initial response would be appropriate. McAuliffe agreed, and had his staff type up a simple, one-word answer to the ultimatum—“NUTS!”—which was then delivered to the German messengers.

When the Germans expressed confusion at the meaning of the American slang, Col. Bud Harper, speaking through a translator, said, “If you don’t understand what ‘Nuts’ means, in plain English, it is the same as ‘Go to hell.’”

Over the next four days, aircraft from the German Luftwaffe bombed the town, but the Americans never surrendered. On Dec. 26, reinforcements from the 4th Armored Division under the command of Gen. George S. Patton arrived in Bastogne, and by Dec. 29, the German forces were in retreat. McAuliffe and his men had halted the German advance.

After the war, McAuliffe remained in the Army. He served as an advisor for atomic weapons tests in the 1940s, was chief of the Chemical Corps, became an expert in chemical and biological weapons and recommended the military be racially integrated. McAuliffe was promoted to four-star general in 1955 and retired from the Army the following year. His honors include a Distinguished Service Cross, two Army Distinguished Service Medals, a Silver Star, two Bronze Stars and a Legion of Merit.

McAuliffe died on Aug. 11, 1975, at the age of 77. He is interred at Arlington National Cemetery in Virginia.