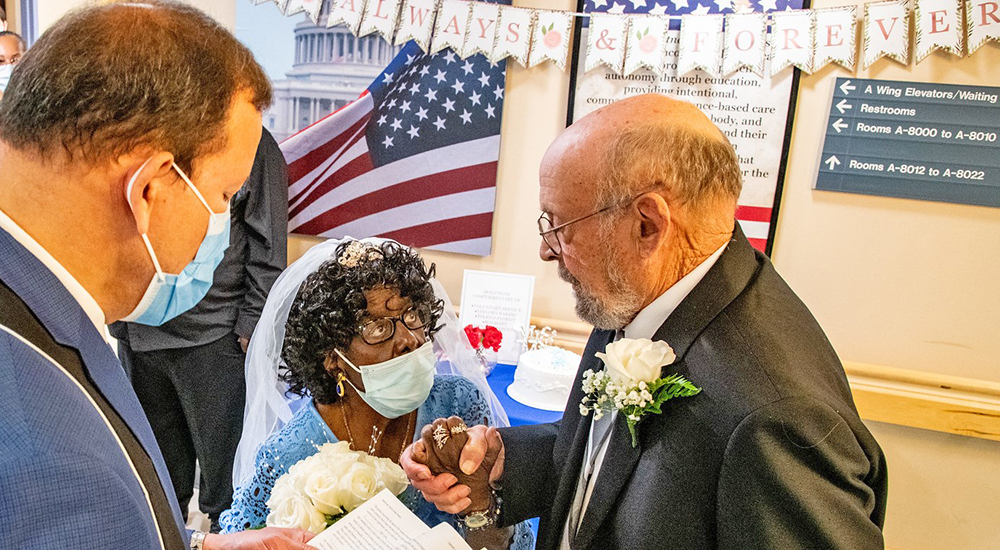 On Aug. 10, 2022, the Richard L. Roudebush VA Center for Development and Civic Engagement (CDCE) team in Indianapolis, Indiana, received a request to make the wish of a terminally ill Army Veteran Gerald Neuman come true. The simple request was for him to be married to his companion of 16 years, Barbara Jean Hall.

The one thing Vietnam Veteran Neuman wished for more than anything was to be married to the love of his life before he took his last breath. Neuman’s relationship with Barbara was the best thing to ever happen to him and he didn’t want to spend another minute not married to her.

They met at a car show cookout. He had offered rides to anyone who was interested in the vehicle. She didn’t hesitate to take him up on his offer. She hasn’t stopped riding with him ever since. He is the love or her life and she says she will love him for the rest of their days.

Team made all preparations happen

Due to his medical limitations, the couple had not been able to obtain a marriage license from the county clerk’s office. But on Wednesday, August 10, the marriage license was granted. The couple wanted to get married the next day.

Most weddings involve months of preparation and include various decisions on the wedding cake, rings, and where the ceremony will be held. The CDCE team, led by Tabitha Ingram, had less than a day to make it happen with all of those decisions needing fast solutions.

The initial request was to provide a shirt and a pair of black jeans. Ingram said, “I know we can do better than that.” She leapt to action, soliciting community support for items to make a memorable occasion for the couple despite the Veteran not being able to leave the medical center.

“Instead of saying yes, we found a way to support the couple saying I do,” Ingram said. By the time she left for the evening, a wedding cake, flowers, a suit, clothing accessories, refreshments, decorations, and even ceremonial rings were secured.

In addition, wedding gifts, including something traditional, old, new, borrowed, and blue were donated. The community and VA staff came together to provide everything for his wish.

With the collaboration of Ingram’s team, Social Work, and Chaplain Sam Cabrera, the couple was surprised with a formal wedding in the inpatient care unit for palliative and extended care. In addition to VA staff, the couple’s children and granddaughter attended the special ceremony.

After the nuptials, Barbara Neuman serenaded her new husband with “Forever My Darling” a cappella. Faces lit up with smiles and tears could be seen as onlookers were overjoyed at witnessing something so special. The couple were extremely humble and grateful for the kindness, care, and his end-of life wishes being honored by enabling their marriage.

Throughout the evening, Mr. and Mrs. Neuman could not stop expressing how special VA made their wedding day. They were grateful VA went above and beyond to ensure their commitment to each other went off without a hitch.