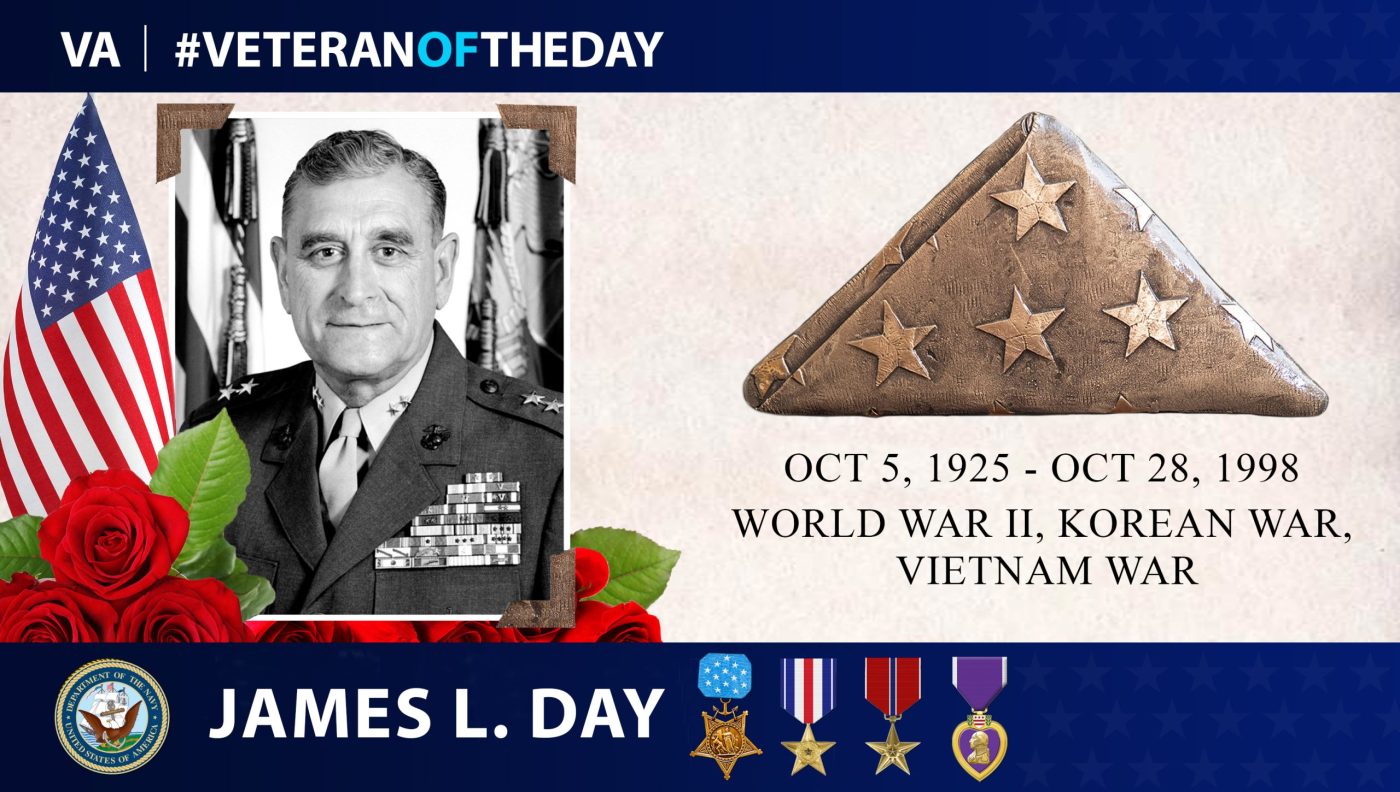 James Lewis Day was born in East St. Louis, Illinois, in October 1925. He joined the Marine Corps in 1943, during World War II, and saw combat in both Guam and the Marshall Islands. On April 1, 1945, Day deployed to Okinawa as a squad leader with the 2nd Battalion, 22nd Marine Regiment, 6th Marine Division. He was 19 years old.

Over a three-day period, from May 14 to May 16, using heavy artillery and mortar fire, Japanese troops assaulted a hill on Okinawa that the Americans called “Sugar Loaf.” Most of the Marines defending Sugar Loaf were killed. Day and the surviving members of his squad took cover in a foxhole and used grenades, rifles and machine guns to repel waves of enemy attackers, some of whom came within only a few feet of their position. Day fought mostly alone—his squadmates had been killed or wounded—and suffered both shrapnel wounds and white phosphorous burns.

“There was really no good reason for me to fall back,” Day said in an interview. “I expected help to come at any time. It just never came, so I kept doing what I was doing.”

On May 17, the exhausted Day and his squad were relieved. Their foxhole was surrounded by the bodies of over 100 dead Japanese soldiers.

Day was recommended for a Medal of Honor for his actions at Sugar Loaf, but many of the men who witnessed the battle were killed soon afterward, including the battalion commander, and the paperwork for Day’s recommendation was lost. Day chose not to pursue the matter. He remained in the Marine Corps and later fought in both the Korean and Vietnam wars.

In 1980, a retired Marine discovered carbon copies of Day’s Medal of Honor recommendation among his wartime possessions. The paperwork was resubmitted but progressed slowly through the approval process. On Jan. 20, 1998, in a ceremony held at the White House, Day was awarded the Medal of Honor that he had earned more than half a century earlier.

“Now, for this extraordinary valor, we recognize James L. Day as one of the bravest of the brave,” said President Bill Clinton. “In words that echo from the peaks of American military history, he has distinguished himself, at the risk of his life, above and beyond the call of duty.”

Day retired from the Marine Corps in 1986 at the rank of major general. He was the last active-duty Marine to have served as a combat infantryman in World War II, Korea and Vietnam, and is believed to have been the only Marine infantryman wounded and decorated for valor in all three wars. Throughout his career, Day received more than 30 military awards and decorations, including a Medal of Honor, three Silver Stars, a Bronze Star, six Purple Hearts and two Navy Commendation Medals.

Day died on Oct. 28, 1998, at the age of 73. He is interred at Fort Rosecrans National Cemetery in San Diego, California.