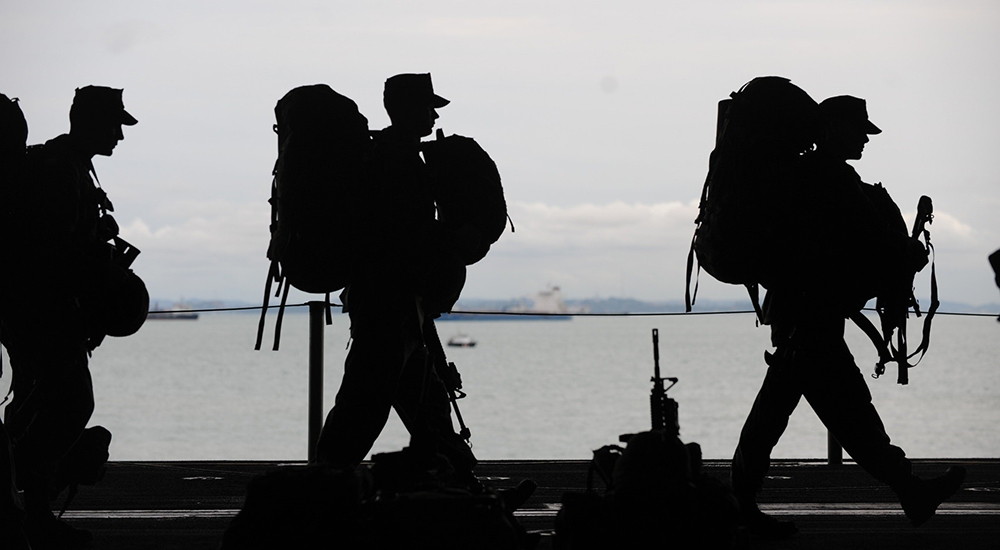 For Jacobsen, getting to that point was a long and winding road.

Jacobsen and his three best friends joined the Army in February 2001 when they were high school seniors. After graduating, they planned to ship off to basic training in October. Just a month before they were set to go to basic training, Jacobsen woke up on Sept. 11, 2001, and watched as the attacks of 9/11 unfolded.

“We initially thought we’d join up, have a great time… life will be grand,” said Jacobsen. “When that plane hit, everything changed. There was a moment of, ‘We just joined the service,’ this is probably not going to be what we envisioned. It was a big reality shake-up for us.”

Jacobsen deployed to Iraq near Baghdad in 2004, serving in a recon unit.

“Probably 50 percent of us were purple heart recipients.”

“When we got in country, the government was building up and getting closer to holding their first elections in 2005,” he said. “There was a tremendous amount of fighting. It peaked through the holidays and through the election. The IEDs were quite prevalent and the situation continued to escalate.”

As Jacobsen and his unit were patrolling their sector, they found an undetonated car bomb and successfully took the it out of commission.

“When we intercepted that bomb, they didn’t like it and they hit us pretty hard one day,” said Jacobsen. “We lost two service members. It was an absolute meat grinder. By the end of it, probably 50 percent of us were purple heart recipients.”

Jacobsen went to visit one of his buddies in a combat support hospital in Baghdad shortly after the car bombing incident.

“I remember looking around and seeing a tremendous amount of pain,” he said. “The environmental impact was pretty overwhelming. And I remember asking the nurse how she deals with this type of environment every day. She said she loved helping people.”

The nurse then turned the question back to Jacobsen and said she doesn’t know how he does what he does in the military. He told her, “I just want to make sure my buddies are good.” That conversation planted a seed in Jacobsen that would later influence his civilian career path.

Jacobsen returned home after his 15-month deployment. In 2009, he transitioned out of the military as a Purple Heart recipient.

Like many Veterans, Jacobsen was trying to figure out what he wanted to do in the civilian world. Inspired by his conversation with the nurse in Baghdad and having done a lot of “medical stuff” in the field in Iraq, Jacobsen decided to go into the nursing profession using his GI Bill.

His goal was to give back to other Veterans by working at VA. Eventually, Jacobsen joined VA in 2013 as a nurse with the Military 2VA (M2VA) Case Management Program.

Helping others find their way

“I remember walking into VA the first time as a patient being overwhelmed and confused and thinking, ‘Man, there’s nobody in here like me,’” he recalled. “I knew I wanted to give back and to be a resource for other Veterans.”

Today, he serves as the M2VA program manager at the Shreveport VA Medical Center (VAMC) in Louisiana, helping fellow Veterans navigate the VA system and connect to VA and community resources.

“I relish the opportunity to speak to these guys and girls who may be struggling,” he continued. “It’s important to be able to share that transitioning doesn’t have to suck. It can get better. It does get better.”

When service members leave the military, some may find difficulty with their sense of identity, financial strain and employment/education barriers. They deal with relationship changes, mental/emotional wellness and physical limitations due to their time in the military.

“When you’re younger, it’s hard for people to see past the moment,” noted Jacobsen. “There are things VA can do to encourage, support and motivate Veterans. That’s where my heart is, to make sure they are educated about VA and health care services. I want them to know what opportunities are available to help put them in a better position in the future.”

“These Veterans are extremely resilient and have unlimited potential. Sometimes, they just don’t know about the opportunities available,” says Jacobsen.

For Veterans who are hesitant to come to VA, Jacobsen’s advice is simple: “Come talk to us. VA has so many offerings that can make transitioning easier for you. The M2VA teams are in the best position to help you navigate VA services. We can get you set up for enrollment in VA care. We can set up appointments and explain the processes and resources you need to know. Just call us and ask the question. We can figure it out together.”

Transitioning from military to civilian life can be difficult. You don’t have to do it alone. Connect with your local M2VA Coordinator today.