Virtual reality: Veteran on virtual trips around the world 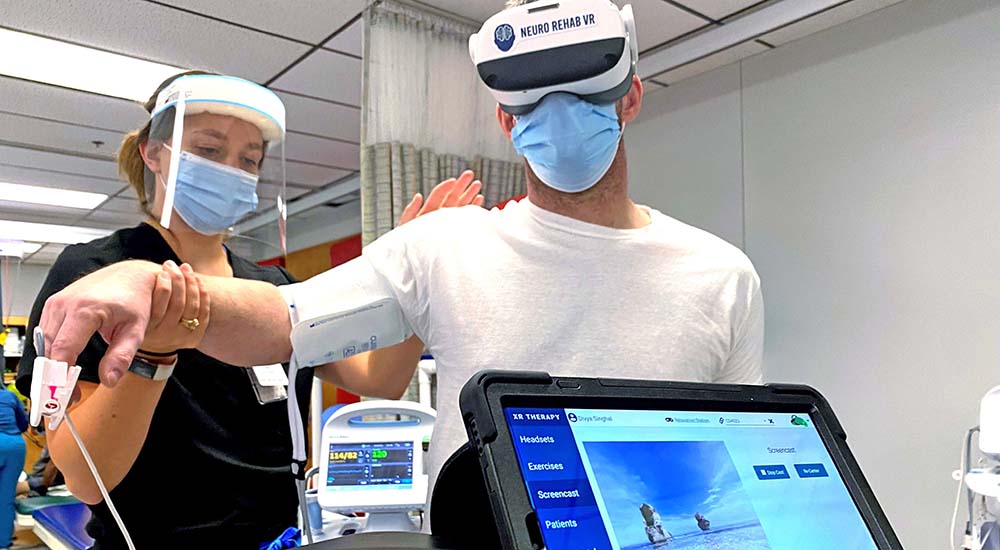 The coronavirus pandemic plunged millions of Americans into the virtual world. Across the country, schools and businesses used virtual means to keep moving forward.

“As we started our journey of a successful transition from a 10 employees service to a 115 employees SCI/D Neuro Rehab service care line in the last 15 months, we have been actively seeking avenues to offer innovative cutting-edge technology to our Veterans,” said Dr. Divya Singhal, chief of Spinal Cord Service.

Singhal said it wouldn’t have been possible without Anne Bailey, Pharm D and director for Clinical Tech Innovation in the Office of Healthcare Innovation and Learning, advocating for this VR therapy and facilitating the process.

Singhal partnered with recreation therapy on a pilot to introduce VR for leisure therapy. The feedback was positive across the board, including one Veteran who reinforced the decision he made to be in the Army and not wear Air Force blue.

“I like flying the airplane,” said Chad Stuart, an Army Veteran who has been in SCI/D for several months following an accident. “I was horrible when I first started, I crashed a lot.”

Stuart enjoyed his hands at flying. He also said there are opportunities to solve mysteries or even move into a house.

After attending a VA summit focused on VR, Singhal was sold, and knew she wanted to integrate active intense acute rehabs like physical, occupational and recreational rehabilitations. VR was the tool to make that happen. After acquiring a system, she now needed volunteers, and that didn’t take long.

Veterans competing against their own abilities

Stuart met with physical therapist Dr. Carla Torrents Gabaldon for their first session that integrated VR into treatment on August 25. He liked it so much, he came back for another session. That next day, Gabaldon set him up with a program that challenges his sitting balance by throwing out colorful notes that are synced to music that he is supposed to collect with two handheld wands.

After several minutes, he mastered that task and wanted to move onto something else more challenging. Singhal says the great thing about this mode of therapy is that each Veteran competes against their own abilities. “What’s really neat is that the complexity level changes as the person progresses,” Singhal said.

Stuart wanted to put the work in, so Gabaldon used an iPad to dial up the next challenge for the eager Veteran. She chose a practical application which simulates an individual completing their grocery shopping, a task many just take for granted, but which for an SCI/D patient poses many challenges.

“That is one very challenging grocery shopping module,” said Stuart. “You are having to go on your left side and use your right hand to reach over continuously.”

A bystander could judge the level of effort by the amount of wobble he had while sitting upright. Physical therapy student Ashlyn Koslovsky was there to guide and keep him on track.

“It’s very challenging for me to do that one,” Stuart said, brushing off the fact he had to rely on Koslovsky for a little help. “I still need that therapist support, but my core is getting stronger and I’m able to sit up unsupported.”

These activities are all by design, as Gabaldon explained.

“We hope that by incorporating VR into our treatments, we are able to make them more salient for our patients and applicable to everyday life at discharge, like the grocery shopping exercise and rhythm exercise module,” Gabaldon said.

Singhal said treatment goals are multi-faceted—physiological as well as psychological. She added that the VR platform is very flexible, allowing providers to offer therapies based on the Veteran’s specific interests and needs.

Stuart is living proof of the psychological benefits.

While describing the process of getting his first wheelchair and the multiple surgeries that kept him on bedrest for more than four months, he mentioned it kept him away from many of the activities he enjoyed, including VR, and that got him down.

“It was tough because I was on bedrest so much, you can’t really do VR laying down,” Stuart said. He now gets to utilize VR even more, first working with recreation therapist Cheryl Kelley, who introduced him to VR, and now added treatments with Gabaldon, who works with him five days a week.

When Stuart first began using a standing frame, which allows patients with paralysis or paresis to achieve a standing position, he would experience a significant rise in heart rate due to his anxiety with supported standing after being on bed rest and in a wheelchair for so long. At times, he would reach the maximum levels within the targeted therapeutic range for his heart rate, causing the therapists to have to return the patient to sitting.

Like Singhal alluded to earlier, the therapists engaged with VR’s psychological benefits, to correct a physiological problem. The problem the therapists faced was allowing Stuart to continue to challenge himself while maintaining safety. These measures are critical to patient safety and the organization’s high reliability principles.

Then the therapists had an idea: send him to Paris.

From park in Paris to Australian beach

The VR system can bring the user to multiple locations in interactive environments. Stuart chose Paris, and he enjoyed watching couples stroll through a Parisian Park. Remarkably, Stuart was able to maintain stable vitals, without significant increases, when using the VR in conjunction to the standing frame. Being a fan of the beach, Stuart then moved on to an Australian beach and moved along the water. His vitals continued to maintain within stable, therapeutic levels.

“I think my favorite was the beach,” he said. “It was kind of talking to me, telling me when to breathe and telling me to watch the waves coming in. That one was good. I felt really calm.”

This concept is actually called Extended Reality (XR), and it is a term to describe environments that combine the real and the virtual worlds, like walking through a grocery store or strolling on the beach.

Gabaldon says the system provides her treatment flexibility, as she is able to address two things at once—a patient’s anxiety (through “Relaxation mode”) while completing functional treatments, such as the standing frame.

Stuart is excited about continuing his therapies and put in a solid 90 minutes of training.

“I felt it was a good workout when I was done in there,” Stuart said. “Even before I got into the standing frame, it wears me out, but it’s good. I like that”.

Stuart’s motivation is sourced from his lengthy stay, but he is also aware that he has more work to do. “Of course, I want to go home, but I don’t want to leave here until I have taken advantage of every opportunity,” he added.

Stuart said he advocates for the technology because he feels it has played a huge role in his recovery process.

“One of the things I like about it is that it’s like recess, because you get to get away from here,” Stuart said. “You know I don’t want to see another hospital, but the VR, it allows me to kind of step away.”

Singhal’s vision means Stuart is not off the hook yet.

“My vision is being able to engage Veterans after they leave the hospital and maximize the potential for an optimal recovery,” Singhal said. “It can enhance their wellbeing, staying engaged with therapists and most importantly serving as an important addition to part of the wellbeing in between clinic visits.”