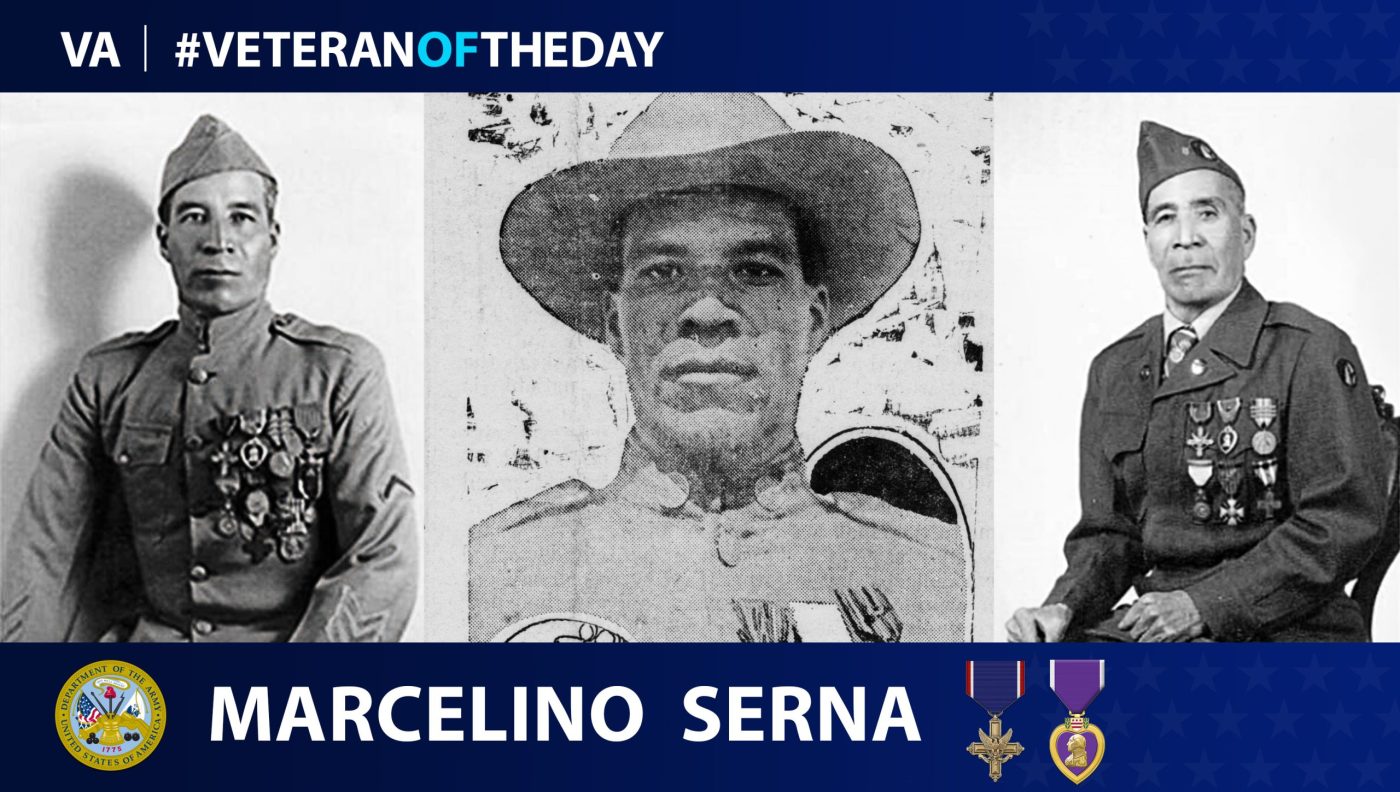 Marcelino Serna was born in April 1896 in a mining camp near Chihuahua, Mexico. At age 20, he traveled to the United States in search of work. In 1917, he was detained by federal agents who thought he might be a draft dodger, as the United States had entered World War I earlier that year. Officials offered him the chance to return to Mexico, but instead, Serna, who did not speak English and was not an American citizen, volunteered for service with the U.S. Army.

Serna completed three weeks of basic training at Camp Funston in Kansas. He was assigned to Company B, 355th Infantry, 89th Infantry Division and deployed to France. On Sept. 12, 1918, during the Battle of Saint-Mihiel, his unit came under heavy enemy fire. After 12 members of the unit were killed, he volunteered to scout ahead. He discovered a German machine gun nest and threw four grenades inside.

“Eight Germans came out with their hands up,” Serna said in a 1962 interview. “Another six were in the nest dead. I held my prisoners until help arrived.”

Two weeks later, while on a scouting mission during the Meuse-Argonne offensive, Serna followed a sniper back to a German trench. He assaulted the trench alone using his rifle, pistol and grenades. He constantly changed his position, leading the Germans to believe that they were under attack by a much larger enemy force. Serna single-handedly killed 26 German soldiers and captured another 24. American troops who arrived to reinforce him wanted to summarily execute the captive Germans, but he refused, calling it a violation of the rules of war.

On Nov. 7, 1918, four days before the end of the war, Serna was wounded in both legs by sniper fire; he spent Armistice Day recuperating at a military hospital in France. He was discharged from the Army in 1919 and returned to Texas, where he worked a variety of jobs, including truck driver, civil servant and plumber. He became a naturalized U.S. citizen in 1924.

Despite his accomplishments, Serna never received a Medal of Honor; he recalled being told by an officer that the Medal of Honor could not be awarded to a private, and that he could not be promoted to a higher rank due to his poor English skills. On March 2, 2022, Texas Governor Greg Abbott posthumously awarded Serna the Texas Legislative Medal of Honor.