Giving the gift of life – Coworker a 100% match 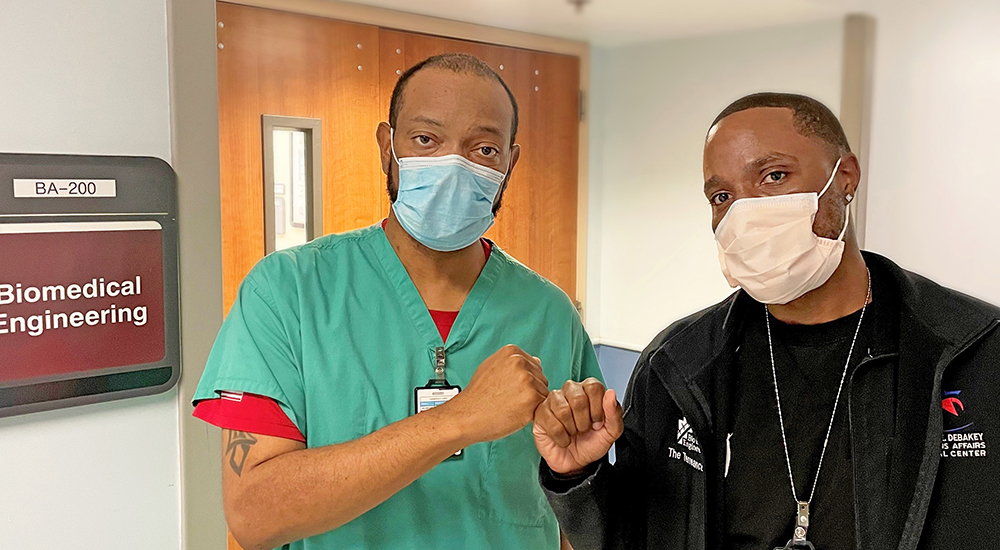 At first, the diagnosis didn’t alarm the Army Veteran who served two tours in Iraq with the 1st Calvary Division as a tank crew man.

“I really didn’t know much about kidney disease, so I wasn’t really concerned about it,” Dawson said. “I figured they’d give me some pills and everything would be fine. But it kept getting worse. My kidney function kept declining.”

Dawson was registered on a transplant list, but doctors said it could take five years. His decline became obvious to those around him, including Terreance Petty, his best friend and VA coworker.

“One day he came over to the house and he didn’t look like himself,” said Petty. “I said, ‘Hey, you alright?’ Then he told me what was wrong.”

Was ready to donate to his mother

When he was in college, Petty’s mother Marsha was diagnosed with kidney disease. Among his relatives, he was the only member of the family who could donate since his organs were a match for his mother.

“As we were going through the donor process, we found out she had cancer,” said Petty. “She passed away from cancer instead of kidney failure.”

Once Petty found out Dawson was sick, he immediately offered to donate a kidney.

“When I was in college, I did research because I was going to donate a kidney to my mom,” said Petty. “Once he told me his blood type. I said ‘Hey, I’m a match. Let’s go.’”

But Dawson didn’t accept the offer right away.

“Terreance had offered me his kidney once before and I declined it because I thought he was just joking around,” said Dawson. “I didn’t think someone I knew would step up and offer me one of their organs.”

While Dawson underwent dialysis, his health continued to decline. Petty offered to donate on several more occasions, and Dawson finally said yes. “I said ‘Ok, let’s see what happens,’” said Dawson. “He signed-up and went through all the tests and procedures.”

His doctor delivered the news that Petty was not only a 100% match, but his kidneys were also incredibly healthy.

“The doctors said it’s almost impossible to be a 100% match and it was unbelievable how healthy he was,” Dawson said. “He didn’t drink. He didn’t smoke.”

Petty decided back in college to stay as healthy as possible just in case he ever needed to donate an organ.

“Kept my kidneys strong… in case someone needed one.”

“My mom needed a kidney and I told myself I would never let anyone close to me get into that situation again,” said Petty, who has known Dawson since 2010. “All the way through college, everyone drinks. I kept my kidneys strong until I knew of someone that needed it.”

In May 2022, Dawson received a kidney from Petty and said he is doing great. “I’m back to work,” he said. “I’m still doing weekly doctor’s visits and lab work, but everything is going great.”

Dawson said he’s forever grateful to his friend. “I told him I’d be in debt to him for the rest of my life,” he said. “He saved my life.”

Petty doesn’t see himself as a hero and has no regrets.

“As long as he’s still here for his kids and family, I’m cool with it because my mom didn’t make it,” he said. “He’s a good friend. Every time I have had a situation, he was always there.”