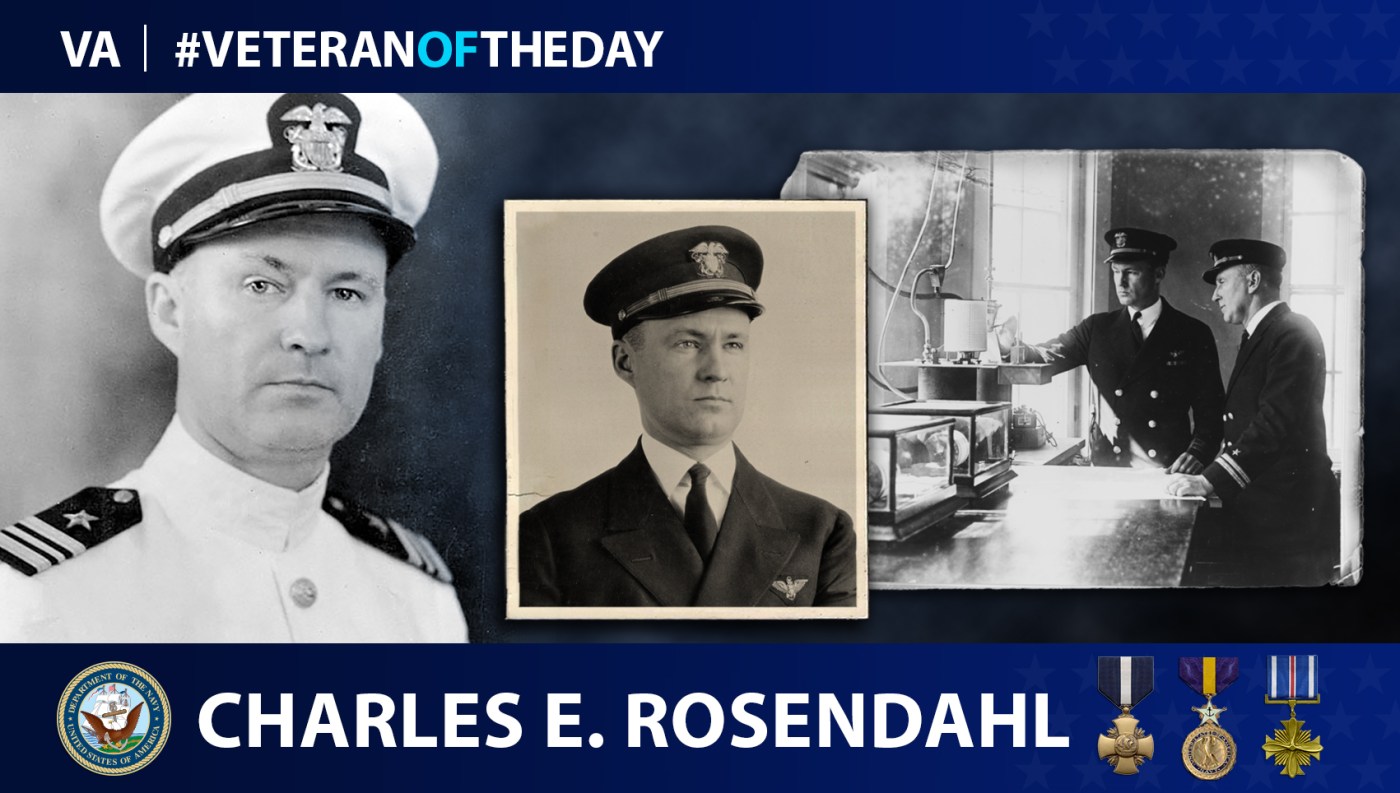 Charles Emery Rosendahl was born in Chicago in May 1892. His parents were Swedish immigrants who moved to America after Rosendahl’s grandfather was killed in a mining accident. Rosendahl’s father held a variety of jobs; census records list him variously as a foreman, an office worker and a blacksmith. In 1906, while working for the railroad, he moved his family to the city of Cleburne, Texas, which served as a rail junction and was home to repair facilities for the Santa Fe Railroad.

After graduating high school in 1910, Rosendahl received an appointment to the U.S. Naval Academy in Annapolis, Maryland; his family sold their horse, Daisy, to pay the academy entrance fee. Rosendahl graduated from the academy and was commissioned as an ensign in 1914, at the outbreak of World War I. During the war, he was stationed aboard several cruisers escorting troop transports, then served as an engineering officer aboard multiple destroyers. In 1921, after the war, he returned to the Naval Academy to teach engineering classes.

After 18 months as an instructor, Rosendahl—bored by academic duty—responded to a Navy call for volunteers to serve aboard rigid airships. He went to Naval Air Station Lakehurst in New Jersey and was trained as a naval aviator, reporting for duty aboard the airship USS Shenandoah in 1924. The following year, a violent storm in Ohio ripped Shenandoah in half. Although 14 crew members were killed, Rosendahl was credited with piloting the front half of Shenandoah to a safe landing in a cornfield, saving six men. He later served as executive officer—and then commander—of the airship USS Los Angeles, traveled to Europe to observe British airships, participated in trial flights of the German airship Graf Zeppelin and commanded the airship USS Akron. He assumed command of NAS Lakehurst in 1934 and was promoted to commander the following year.

In 1937, while Rosendahl was on duty, the German zeppelin Hindenburg crashed and burned during an attempt to dock at NAS Lakehurst, killing 36 people. He led fire and rescue teams responding to the blaze and later testified to federal investigators that he feared the Hindenburg would explode, destroying the airfield and killing everyone present.

“I thought it was curtains for all of us,” Rosendahl said.

The Hindenburg disaster led to a general decline in the use of airships, and the loss of the airships USS Akron and USS Macon a few years earlier in storms like the one that had destroyed Shenandoah led the Navy to abandon its airship program. Rosendahl, however, remained a passionate defender of airships even after the Hindenburg crash and lobbied Congress to make lighter-than-air transport an integral part of Navy operations. In 1938, he published a book explaining his views titled, “What About the Airship?”

“We let the Hindenburg disaster become the turning point,” he said. “It won’t be many years before you have the return of the airship.”

Rosendahl served in World War II as commander of the heavy cruiser USS Minneapolis, which was torpedoed by Japanese forces during the Battle of Tassafronga in November 1942. Although the ship was badly damaged in the attack, he kept the Minneapolis afloat and guided it to safe harbor.

“She is like hell going to sink,” he reportedly told his executive officer.

Rosendahl retired from the Navy in 1946 with the rank of vice admiral after 36 years of service. He spent his later years advocating for lighter-than-air flight and served as executive director of the National Air Transport Coordinating Committee, working to reduce aircraft noise levels. Rosendahl was a recipient of a Navy Cross, a Distinguished Service Medal and a Distinguished Flying Cross, as well as honorary doctoral degrees from both Tampa University in Florida and Rider College in New Jersey.