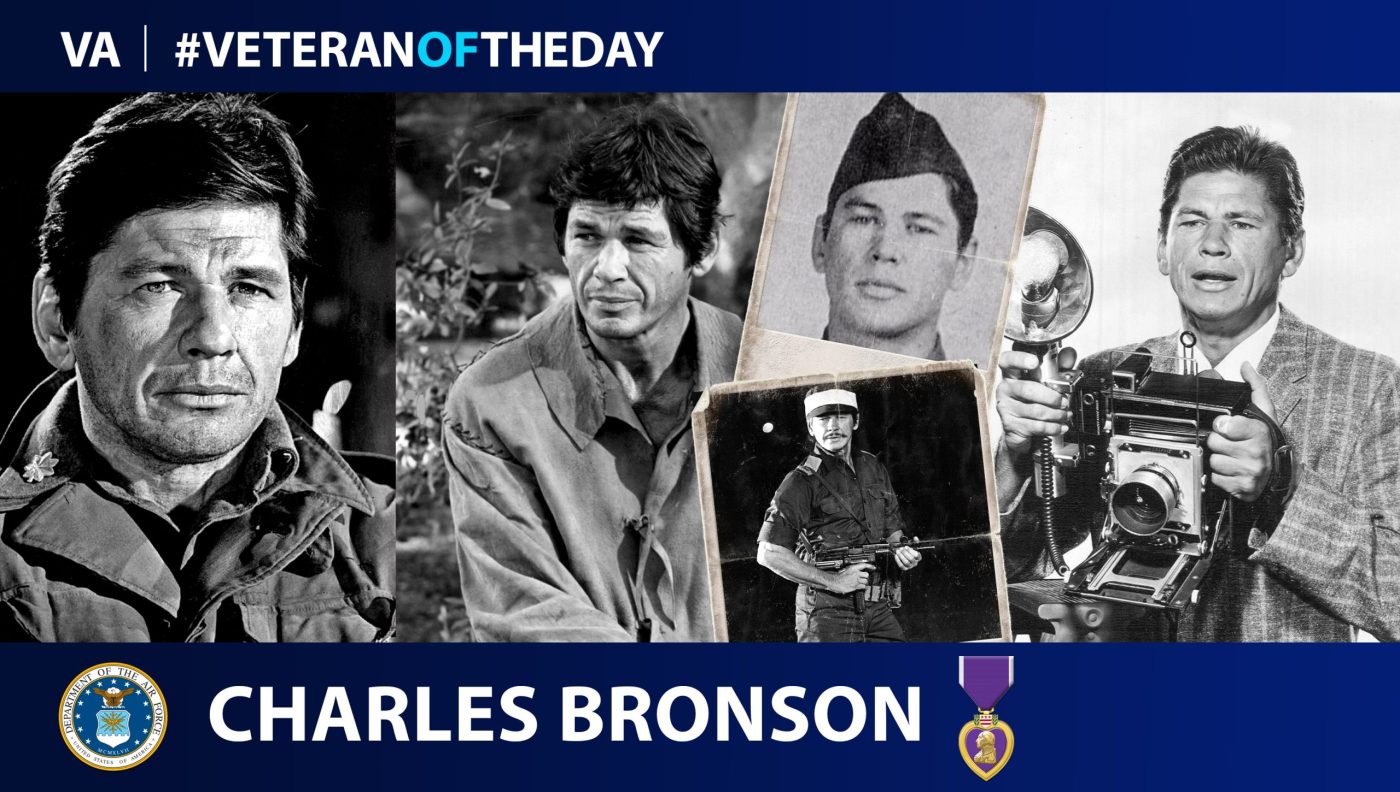 Charles Bronson was born Charles Dennis Buchinsky in the coal mining town of Ehrenfeld, Pennsylvania, in November 1921. He came from a large family and grew up in such severe poverty that when he began attending school at the age of six, he wore a dress that had been handed down from an older sister. By the age of 16, Buchinsky was working in the mines, earning about one dollar for every ton of coal he dug.

In 1943, during World War II, Buchinsky was drafted into the Army. He attended gunnery school at the 760th Flexible Gunnery Training Squadron in Kingman, Arizona. In 1945, he was assigned to the 61st Bombardment Squadron, 39th Bombardment Group, based in Guam. As a gunner aboard a B-29 “Superfortress” bomber, he flew 25 missions in the Pacific Theater, including sorties over Japan, and received a Purple Heart for wounds he received in combat.

Buchinsky received an honorable discharge in 1946. After the war, he worked a variety of odd jobs, including onion picker, bricklayer and short-order cook. While working in Atlantic City, New Jersey, he met a vacationing troupe of actors from Philadelphia who introduced him to the world of theater. Hoping that acting might provide a path out of poverty, he moved to California in 1949, where he studied acting and took speech classes to improve his language skills; he had not learned to speak English until his teens.

Buchinsky initially struggled as an actor, appearing in a series of bit parts. His first on-screen appearance was an uncredited role in the 1951 film “You’re in the Navy Now,” in which he played a sailor. During the Red Scare of the 1950s, when it was suspected that communist agents were infiltrating Hollywood, he feared that having a Russian-sounding name would prevent him from finding work; he changed it to “Charles Bronson” in 1954.

Bronson’s first breakthrough came in 1958, when he was cast in the lead role of the television series “Man With a Camera.” He then appeared in several landmark action films, such as “The Magnificent Seven” (1960), “The Great Escape” (1963) and “The Dirty Dozen” (1967). In 1974’s “Death Wish,” Bronson was cast in the career-defining role of Paul Kersey, an architect-turned-vigilante; he would reprise the role in four sequels between 1982 and 1994.

Bronson’s “tough guy” image was helped by his rough facial features, gravelly voice and muscular physique; fans in Europe called him “the ugly one” and “the holy monster.” Privately, he chafed at being typecast as an action star and desired more challenging roles. In reality, Bronson was a thoughtful, quiet man who enjoyed painting and spending time with his family.

Veteran of the Day WWII