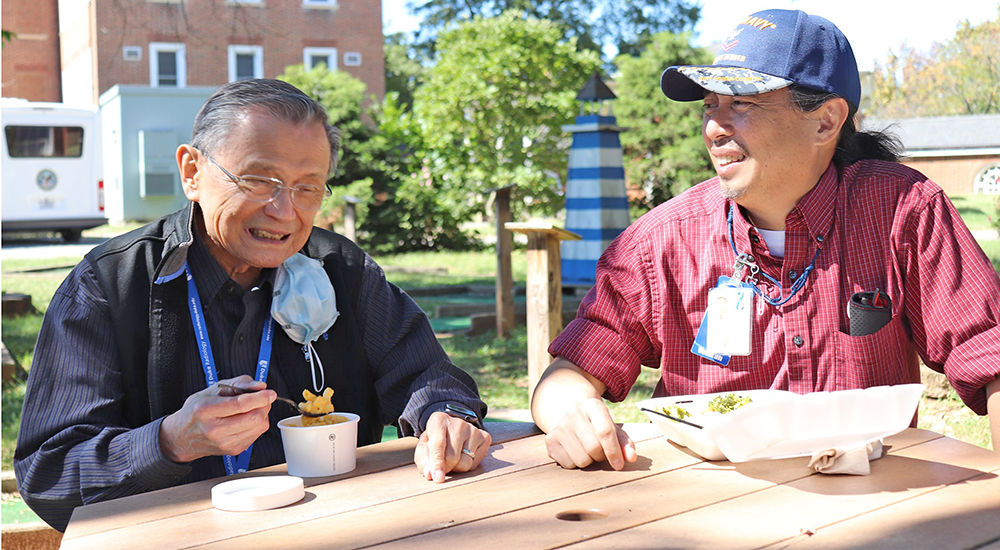 Two doctors, a father and son team at Salem VA, began their journeys into medicine from very different starting points, but each believes their day is made all the better for being able to spend it with family.

Dr. Placido DeGuzman is on his second stint with Salem VA. The first lasted nearly a decade from 1977 to 1986 and the second began in 2007. But well before he set foot in Virginia, DeGuzman remembers running for cover in his rural home in the Philippines. His eldest son, Dr. Gerard DeGuzman, was also born in the Philippines but came to VA by way of a stint in the Navy.

“I remember a lot of stuff about hiding from the Japanese,” the more than 80-year-old radiologist said. “We would watch dogfights and climb trees without realizing the danger of flying fragments and that kind of thing. I remember when the Americans came, me and my friends would trade bananas for K-rations. Everyone was looking for the Hershey’s chocolate, the liver spread, the Spam, Wrigley’s chewing gum and all these other goodies. Those are the things I remember very well. Very clearly.”

Although born and raised in the Philippines, the younger Dr. DeGuzman recalls that around the time he was 10, his parents told him and his siblings they would be moving to the United States.

The elder DeGuzman graduated from the University of Santo Tomas School of Medicine in 1963. He then did a rotating internship from 1964-1967 followed by a two-year radiology residency at Brooklyn Jewish Hospital in New York.

He had fellowship training for three years at Boston City Hospital before moving with his family to Salem in 1977 to start in his new position in the Salem VAMC. 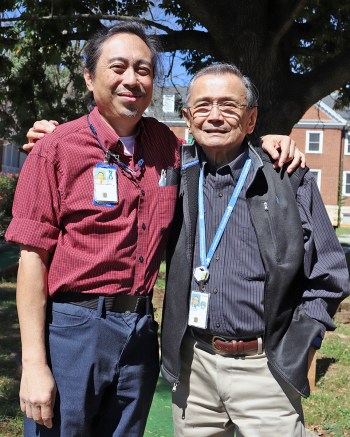 While in medical school, Gerard was born. “I say my kids were made in the Philippines but assembled in the U.S.,” he jokes, eliciting a dad-joke eye-roll from his son.

“Coming from the Philippines to landing at JFK, it was so different than Angeles City,” (home to the former Clark Air Base) Gerard remembers arriving in the United States. The occupational medicine specialist is the oldest of four children who originally went to school as an art major before dropping out to join the Navy.

“When I decided to join the service, I went first to the Air Force recruiter who sat with his feet on the desk and showed no interest in me. So, I walked down the hall to the Navy recruiter who had me take a vocational aptitude test. I scored something like a 99 out of 100 and he told me I could choose any job in the Navy I wanted.”

Gerard decided on becoming an electrician’s mate and he served on two submarine tenders before leaving the Navy to attend community college and then getting his bachelor’s in history from Mary Washington College.

“About the time I was finishing my degree I was considering what I wanted to do and realized my dad loved his job. He always found it interesting and he enjoys it so much.”

With that in mind, Gerard spent another year and a half in school collecting science credits that would allow him to apply to medical school. He did get in and when he finished medical school, he continued at Carilion Health Systems to complete his training in family medicine.

“I decided in the middle of residency that I didn’t want to go into private practice and realized the reason I had made it as far as I had was because of the experiences I had in the Navy fixing submarines. The discipline and accountability and knowledge of being able to extend your boundaries. Growing up I never thought I’d be a doctor. So, in the middle of training, I decided I’d give back to Uncle Sam. I kind of felt an obligation to serve again and so I signed up to be a medical officer in the Navy after completion of my residency.”

Back in the Navy, Gerard’s first duty station was aboard the USS Nassau, a large deck amphibious ship that carried 2,000 Marines and 1,000 Sailors.

“This is the best group of people.”

Finishing his new residency in 2005, he took a position in private practice before meeting a VA compensation and pension examiner at church in 2013.

“She told me about her job and said I’d be great at it. The first thing I thought was, wow, if I could get a job with VA, I’d be working with Dad. So, I applied and later got the job… and it was related to what I was doing in occupational medicine.”

Today, Gerard is the environmental health clinician for Salem VA, and he says being a Veteran helps him reach out to other Veterans to let them know about potential exposure issues. With both father and son working together, the likelihood of either leaving VA is something that crops up occasionally.

“Occupational health is a small field and I still get recruited. But unless they want to give dad a job too, we’ll just plan on staying here for a while.”

Placido smiles and nods to emphasize his agreement. “It’s exciting at this point. This is the best group of people I work with. They keep me motivated. For me, my motivation and my work remove from my mind any thoughts of retiring.”