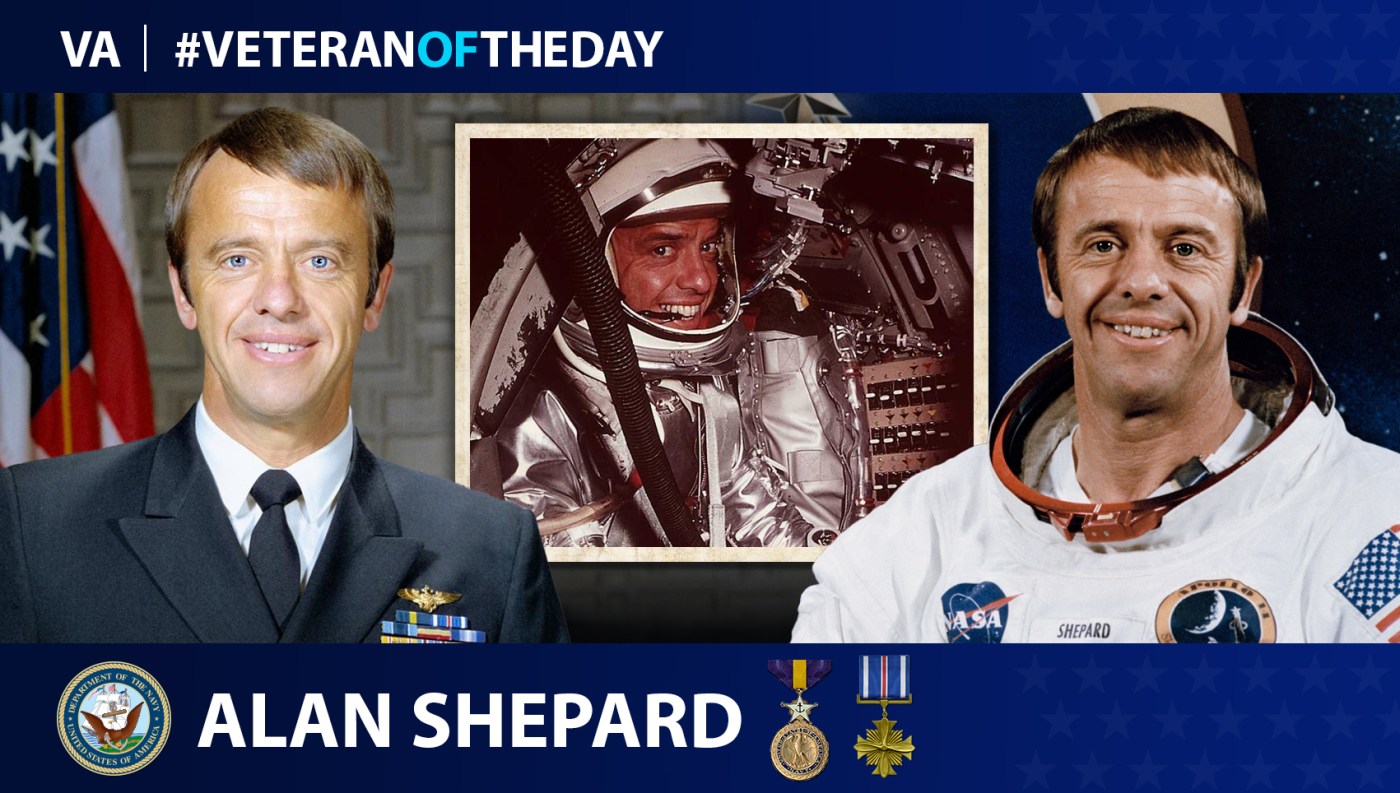 Alan B. Shepard Jr. was destined for a career in the military. His father, Alan Shepard Sr., became a member of the National Guard in 1915 and served in the American Expeditionary Force in France during World War I. He was recalled to active duty during World War II, reaching the rank of lieutenant colonel. Shepard Jr., born in November 1923, grew up in East Derry, New Hampshire. He excelled in school, skipping sixth and eighth grade, and easily passed the Naval Academy entrance exam. At 16, he enrolled in Navy prep school Admiral Farragut Academy because he was too young to attend the Naval Academy. He graduated from the United States Naval Academy in 1944.

Once Shepard graduated, he served aboard USS Cogswell, a destroyer in the Pacific, during World War II. In January 1946, he completed flight training at the Naval Air Station Corpus Christi in Texas. One year later, he was sent to the Naval Air Station Pensacola in Florida for advanced flight training. When he earned his naval aviator wings, his father pinned them on his chest. With his wings, he served on aircraft carriers in the Mediterranean before enrolling in the Navy Test Pilot School at Patuxent, Maryland, in 1950. Upon graduation, he became a test pilot.

Shepard served as an operations officer of the night fighter unit, Flight Squadron 193, at Moffett Field, California, and flew Banshee jets. He returned to the Pacific to serve aboard the carrier USS Oriskany, and then served as a test pilot and instructor at Patuxent. He then attended the Naval War College in Newport, Rhode Island. After his graduation in 1957, he was assigned as an aircraft readiness officer in the Atlantic fleet as a member of the commander-in-chief staff.

In 1957, the Soviet Union’s satellite, Sputnik 1, was successfully launched into orbit, prompting President Eisenhower to commence the space race. In 1959, Shepard was selected along with six others to become a part of the NASA Mercury Seven, America’s first astronauts. On May 5, 1961, he became the first American and second person in space. He spent 16 minutes in flight aboard the Freedom 7 capsule. He was prevented from further space exploration when he began to suffer from Ménière’s disease, which affects the inner ear and causes extreme dizziness and episodes of nausea.

While grounded, Shepard served as the chief of the Astronaut Office. A later operation cured his disease and he commanded the Apollo 14 mission to the moon in January 1971. He and fellow astronaut Ed Mitchell embarked on two moon walks, for a total of nine hours spent on the moon. He was the sole member of Mercury Seven to walk on the moon, and he even brought his passion for golf to space, famously seen in photos hitting two golf balls on the moon before returning to Earth. Later that year, he became the first astronaut to be promoted to rear admiral.

In 1974, Shepard retired from NASA and the Navy. He became chairman of the Marathon Construction Corp. in Houston and served on several additional boards. He also founded his own company, Seven Fourteen Enterprises, Inc., named after his two space flights, Freedom 7 and Apollo 14. He was the president and founder of the Astronaut Scholarship Foundation, which provides scholarships to college students studying science and engineering.

Shepard was inducted into the U.S. Astronaut Hall of Fame in 1990. On July 21, 1998, he died at age 74. His wife Louise passed five weeks later. The couple was survived by their three children and several grandchildren.