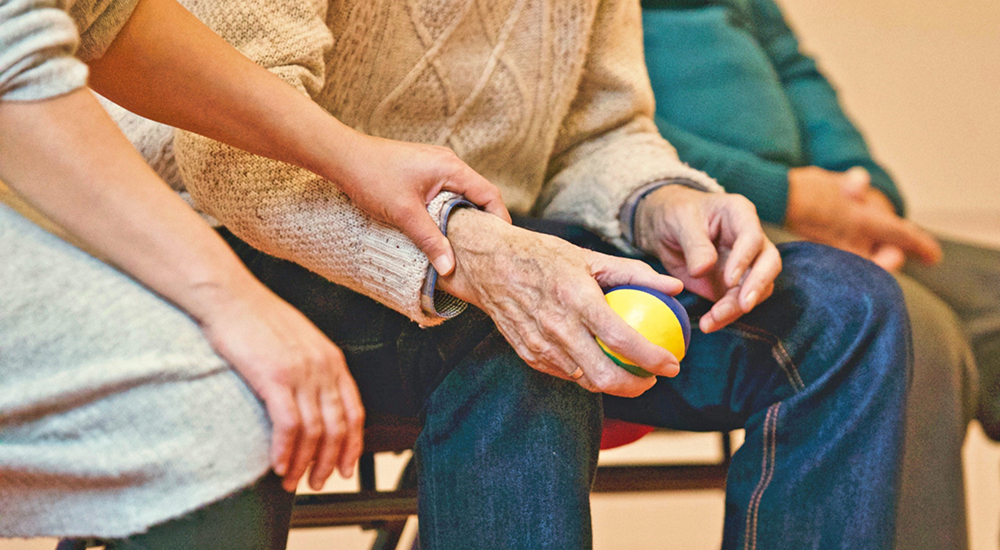 The award was presented “For your unrelenting effort and extraordinary service and care you provided as frontline health care workers during the COVID-19 pandemic.”

The IMFP is one of six programs nation-wide that provides unique training opportunities to care for some of the most vulnerable Veteran populations. The program offers geriatric medicine, hospice and palliative medicine to over 100,000 Veterans living in South Texas.

“I’ve seen how hard you worked.”

Mike Toreno wears two hats. As one of two palliative care social workers on the disciplinary team, which also includes chaplains, pharmacists, psychologists, nursing and medicine staff, he is also a VFW Officer for Post 76 in San Antonio.

The admiration of his fellow VA colleagues was the catalyst for getting them the recognition they deserved. “Being a part of this program and being side-by-side with each of you, I’ve seen how hard you worked and your dedication to the patients,” Toreno said.

One palliative team member, Chaplain Eric Gonzales, said supporting families is something he will always cherish during his fellowship. “I was called to offer a bedside prayer by the family of a Veteran,” Gonzales said. “The Veteran’s family was having some difficulty letting him go. I helped them to understand the situation and use the time they had left to, “Just be and say the five things that matter most… please forgive, I forgive, I love, I remember, and I will never forget.”

“Admirable because it is such a challenge.”

VFW District 20 Commander and Veteran Bill Smith, whose wife is a physician, knows how difficult health care, and especially health care during a pandemic, can be. “The path you have chosen, you have chosen to take care of individuals as they depart this world and go into another,” Smith said. “That is admirable because it is such a challenge.”

Smith talked about the evolution of both organizations, and how the pandemic affected how each conducts its business. He drew similarities between the surge of COVID patients facing IMFP and the rush of Veterans flooding into VFWs after the beginning of the Global War on Terror.

Dr. Douglas Boyer, acting deputy chief of staff, thanked the VFW leadership for being such strong partners and told the audience about his first interaction with the VFW some two decades earlier. After going on leave, he found himself alone late at night in an airport. The only one around was a gentleman from the VFW. Boyer said he was given a gift card for Burger King and it turned out to be one of the tastiest meals he’s had.

“I knew right then the VFW would forever hold a place in my heart,” Boyer said.

“Our heart goes out to you.”

The Commander of Post 76, Marine Corps Veteran Robert Hernandez, echoed the sentiments of mission. “You know we all have one common mission and that mission is to take care of Veterans. We’ve been doing this for more than a hundred years and continue to do it today.”

Toreno said the team kept providing safe, timely and high-quality care under the most extreme conditions. For a palliative care team, one of the most important aspects is providing compassionate care.

“I see you,” Hernandez said. “Because I’ve been to several hospitals and I see what each one of you have been going through by taking care of our own. We know what you are going through. Our heart goes out to you, so please don’t stop doing what you’re doing because our lives depend on you.”