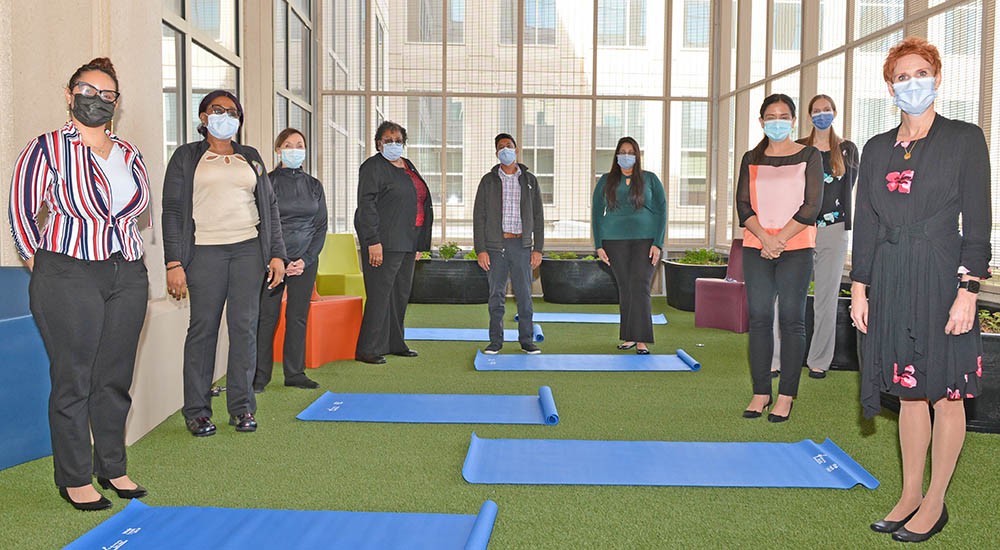 Innovation Revolutionary is a regular series from the VHA Innovation Ecosystem. The series focuses on VA employees who are disrupting the status-quo, breaking down barriers, and attempting to radically revolutionize Veteran care and employee experience.

When creative arts therapist Sheila Johnson arrived at the Acute Care Mental Unit at Orlando VA, she felt something was lacking. For Veteran patient safety, there are many restrictions on what is allowed on the unit. For example, patients often can’t have pencils or common arts supplies, making Johnson’s job more difficult.

Stepping outside onto the facility’s patio, Johnson entered a space she immediately thought could be put to better use. “The patio was pretty bare, mostly concrete with mesh tarps overhead. I realized, wow, it would be so awesome to have a garden here.”

A history of creative care

Johnson is a Creative Arts therapist with a specialty in music therapy. A former professional singer, she was encouraged by a teacher to use her skill to become a music therapist. With a son in Air Force Intelligence, Johnson felt called to take her skills to Chicago VA to benefit Veterans in 2007.

Arriving at Orlando VA in 2018, Johnson quickly saw the opportunity to transform a barren patio into something more. Every detail had to be planned specifically to maintain Veteran patient safety while also providing an inviting space Veterans would want to use. She would need some additional help.

With the support of her supervisor, Annie Barreiro, Johnson pitched her idea during Orlando VA’s Shark Tank Competition in 2020, when the pandemic really increased the need for a space that could bring the outdoors, indoors.

Johnson’s idea quickly picked up both steam and attention from VA leadership and Veterans. Expanding beyond a garden, the Tranquility Garden also provides an array of services: guided meditation, Tai Chi, gardening, aromatherapy, herbology lessons, and even karaoke.

“Evidence continues to support the idea that programs like yoga, tai chi and other mental health modalities through whole health are impactful,” said Johnson. “We are seeing significant progress in our patients and a faster reintegration and recovery process. This is due to our ability to bring patients out to the tranquility garden where we can teach them new skills and tools.”

Johnson recalls one experience with a Veteran suffering from PTSD. While Johnson was leading a guided meditation class, the Veteran, was becoming violent, opened the door to her session, looked around, and joined in. “Thank you so much for coming. Thank you for what you’re doing,” he said to Johnson after the session was over. He attends each of her sessions now.

“Veterans are often operating at such a high level during their service, and when they leave, they need help getting back down to a more tranquil level. This garden provides that.”