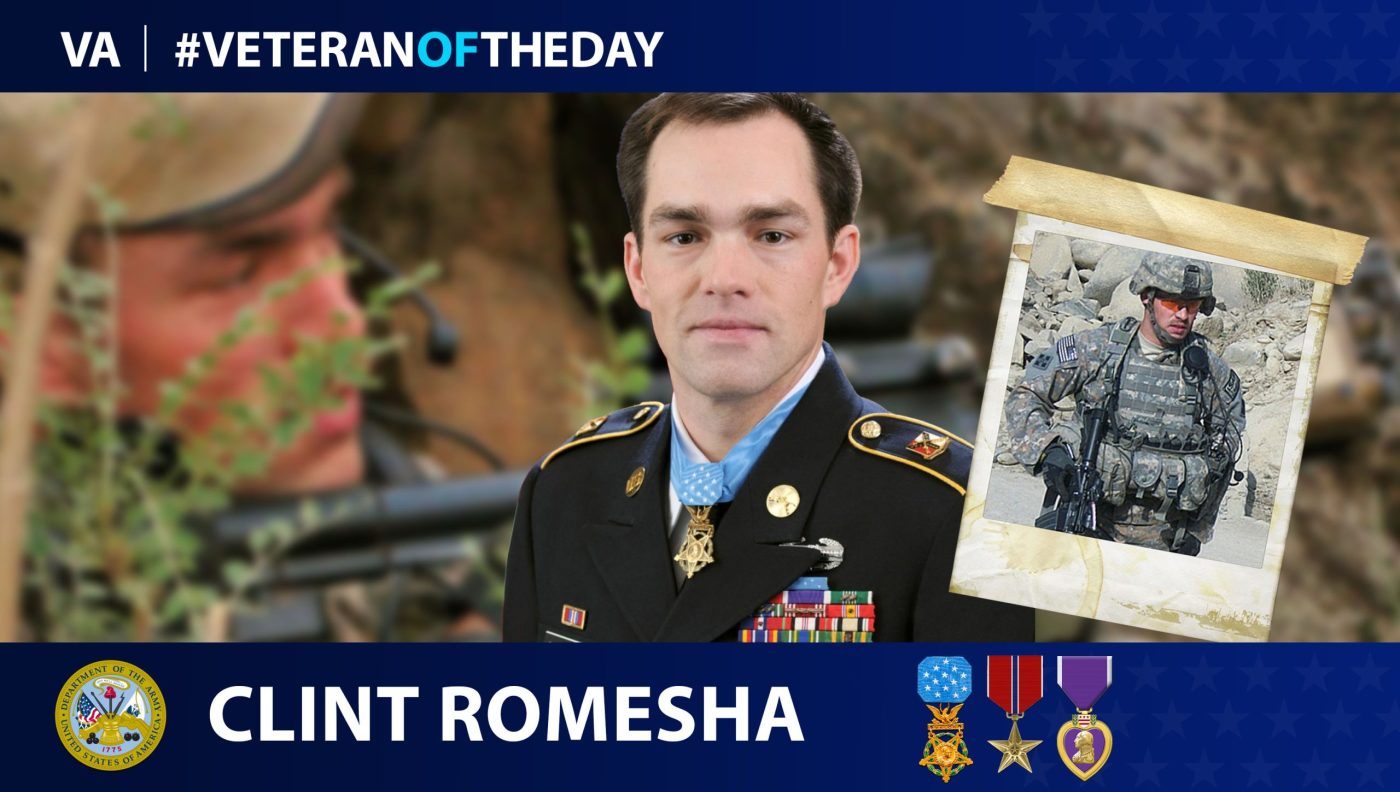 Growing up in a small town in northern California, Clint Romesha was always encouraged to continue his family’s legacy of serving in the military. With a grandfather who served in World War II, a father who fought in Vietnam and brothers who were currently serving, Romesha knew it was only a matter of time before he joined, too. After graduating high school, he enlisted in the U.S. Army in September 1999 and was sent to Fort Knox, Kentucky, for training.

After he completed basic training and advanced individual training, Romesha received his first assignment as a tank gunner at Camp Vilseck, Germany. After that, he was then sent to Camp Casey, South Korea, where he was assigned as a gunner and task assistant tank commander with Company A, 2nd Battalion, 72nd Armor Regiment, 2nd Infantry Division. Upon learning that his former mentor was killed in Iraq, Romesha volunteered to go to Iraq. He deployed to the country twice in support of Operation Iraqi Freedom.

In May 2009, Romesha and his unit deployed to Afghanistan for Operation Enduring Freedom. His unit was assigned to Combat Outpost Keating in the Kamdesh District of eastern Afghanistan. Keating was located in a valley surrounded by steep mountains and regularly came under attack during the course of its operation. On Oct. 3, 2009, Romesha and his team woke up to an estimated 300 enemy fighters attacking the outpost from their position high up in the mountains. While the outpost was hit with rocket-propelled grenades (RPGs), mortars and anti-aircraft machine guns, Romesha conducted a reconnaissance of the battlefield and sought out reinforcements from the barracks. He then took out an enemy machine gun team.

Moving through open land that was suppressed by a barrage of rocket-propelled grenades and small arm fires, Romesha was able to get to a generator for cover. He then engaged with another enemy team that was on high ground to the west. He was injured when an RPG struck the generator he was using. After checking on his assistant gunner, who was also hit by the same RPG, and determining he was fine, Romesha reengaged with the enemy until he was relieved by another soldier.

He then went on to assemble a five-man team and instructed them to load up on ammunition. Armed with a sniper rifle, Romesha then destroyed multiple enemy targets, including three Taliban fighters who had breached the camp’s perimeter. Romesha and his team were eventually able to secure the ammunition supply point. Determining that the entry control point was the only remaining avenue for the enemy to approach, he secured and reinforced the entry control point building and engaged with more enemy fighters. He also maintained radio contact with the tactical operations center and directed air support to destroy over 30 enemy fighters.

Upon hearing that some of his fellow soldiers were injured, Romesha and his team provided covering fire for three soldiers to be able to safely return to the aid station. Once those three soldiers arrived at the aid station, he pushed his team forward about 100 meters to prevent the enemy from taking the bodies of fallen soldiers off the combat outpost.

The Battle of Kamdesh lasted 12 hours, and eight soldiers were killed.

On April 4, 2011, Romesha left the military to spend more time with his family. In 2016, he published a book, “Red Platoon: A True Story of American Valor,” which is about the Battle of Kamdesh. His story was also portrayed in the 2020 film “The Outpost.”

For his actions in October 2009, Romesha was awarded the Medal of Honor on Feb. 11, 2013, by President Barack Obama. He has also received the Purple Heart and the Bronze Star Medal.

Since retiring from the Army, Romesha has worked as a field safety specialist with an oilfield construction company in Minot, North Dakota. He lives with his wife and kids and and enjoys watching hockey.