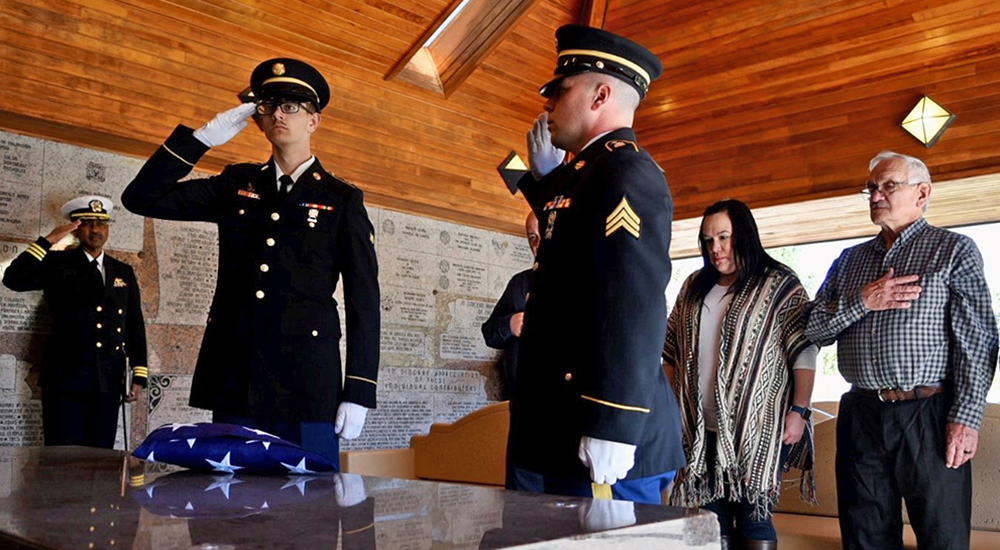 Cindy Miller never had the chance to meet her grandfather, but she was able to honor him at Fort Gibson National Cemetery 77 years after he was lost at sea.

One month shy of his 36th birthday, Joseph West enlisted in the Navy on March 29, 1944. He was married with four small children at home but found himself leaving his home state of Oklahoma and going overseas to serve his country aboard USS Drexler.

On March 28, 1945, the Drexler was attacked by a kamikaze as it was headed to Okinawa, Japan. The ship was then hit by another aircraft and sank in less than 50 seconds. West was lost at sea among the 158 killed and 52 wounded.

It started with a simple question

One day in August, while Cindy Miller and her husband Chuck were visiting Fort Gibson National Cemetery, they stopped in the administration office and asked if there was anything that could be placed for her grandfather who was lost at sea. VA staff took the information, verified it and soon a memorial headstone was ordered.

“We threw a pitch and they hit a homerun,” said Chuck Miller.

“It just happened that fast and here we are today,” said Cindi. “I’m nervous and excited. The staff have been so wonderful.”

The small committal service was led by Chaplain and retired Navy Veteran Forrest Kirk, with support from the Veterans of Foreign War and an Honor Guard team. The Miller family also held an unveiling of the headstone and took some time to honor their loved one.

Fort Gibson National Cemetery currently has close to 100 memorial markers. Memorial headstones and markers are furnished by VA for eligible deceased active duty service members and Veterans whose remains are not recovered or identified, are buried at sea, donated to science, or whose cremated remains have been scattered.

West’s remains were lost at sea, and he had never been commemorated at a National Cemetery with a memorial marker or a final resting place before his granddaughter came into the cemetery with her question.

“This was a wonderful experience for the cemetery and also provides a little bit of closure for the next of kin,” said David Van Meter, director, Oklahoma VA National Cemetery Complex. “This allows them to visit the cemetery during Memorial Day and Veterans Day and have a place to bring flowers and memorialize their loved one. We want our Veterans and their family members to know that regardless of the situation, they can always find a final resting place at a VA national cemetery. If it’s not at Fort Gibson, it’s at one of the other 155 VA national cemeteries. They’ve earned the right to be buried here.”

Fort Gibson National Cemetery is located in Muskogee County, one mile northeast of Fort Gibson, OK. It is situated on land that was once part of the military reservation and is within the limits of the Cherokee Nation.

VA operates 155 national cemeteries and 34 soldiers’ lots and monument sites in 44 states and Puerto Rico. More than five million Americans, including Veterans of every war and conflict, are buried in VA cemeteries. VA also provides headstones, markers or medallions for Veterans buried in state and territorial Veterans cemeteries or interred in private cemeteries.

Burial in a VA national cemetery is open to all members of the armed forces and Veterans who have met minimum active duty service requirements, as applicable by law and were discharged under conditions other than dishonorable.

Members of the reserve components of the armed forces who die while on active duty under certain circumstances or who die while on training duty are also eligible for burial, as are service members and former service members who were eligible for retired pay at the time of their death. Spouses, minor children and, under certain conditions, dependent unmarried adult children are also eligible for burial even if they predecease the Veteran.

VA offers a new way to pay tribute to Veterans on the Veterans Legacy Memorial (VLM) website. The site, originally launched in 2019, contains a memorial page for each Veteran and service member interred in a VA national cemetery.

The online tribute allows visitors to voice memories and appreciation for a Veteran’s service. All comments will be reviewed for appropriateness prior to being posted.