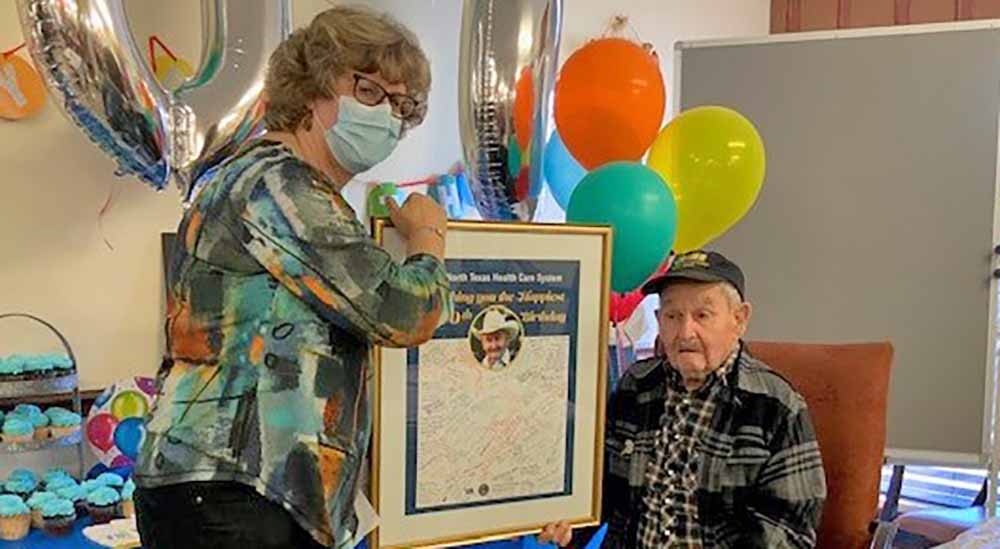 It’s not every day you meet someone who has lived a century. Meet Arthur “Curly” Talmage.

“I never dreamed I’d still be around this long, but I’m glad I made it,” he said.

Drafted into the Marines during World War II, Talmage spent three years in the South Pacific with the Fourth Marine Division, including service in Iwo Jima.

Discharged in 1945, he traveled through Michigan and Florida before getting a job in Texas.

Fell in love with horses

“After the war I fell in love with horses,” he said. “My friend and I ended up traveling the country, camping along the Saint John River, and ultimately got jobs in Dallas.”

In 1949, Talmage purchased his first horse. He wrote his dad and asked him to send his saddle, rifle and saddlebags. His love of horses began with working on dude ranches, and his passion for riding cutting horses grew through the decades.

“I bought my first horse from a pen of horses headed to the slaughterhouse and never looked back,” he said.

Over the next 70 years, Talmage did just that: raising horses and spending his life outdoors with family and friends, sharing his stories along the way.

One of our favorite residents

“Mr. Talmage is one of our favorite residents. We love hearing the stories about his time in the Marines and all the years he spent raising horses,” said Lacey Richardson, activity director at the Sante Fe Health and Rehabilitation Center, where Talmage currently resides.

For his 100th birthday celebration, Talmage took off his well-worn Asian Pacific campaign cap and donned a National Cutting Horse Association cap given to him by the organization’s president, along with a prestigious lifetime award.

“Mr. Talmage is a great example for us to walk in his footsteps,” said Ted Sokol, president of the National Cutting Horse Association. “He’s always been a very humble person and, with 61 years of membership, he is one of the eldest members. I’m proud to know him.”

When asked his secret is to a long life, Talmage kept his advice simple: “Enjoy the outdoors, spend time with horses, and eat sweets.”