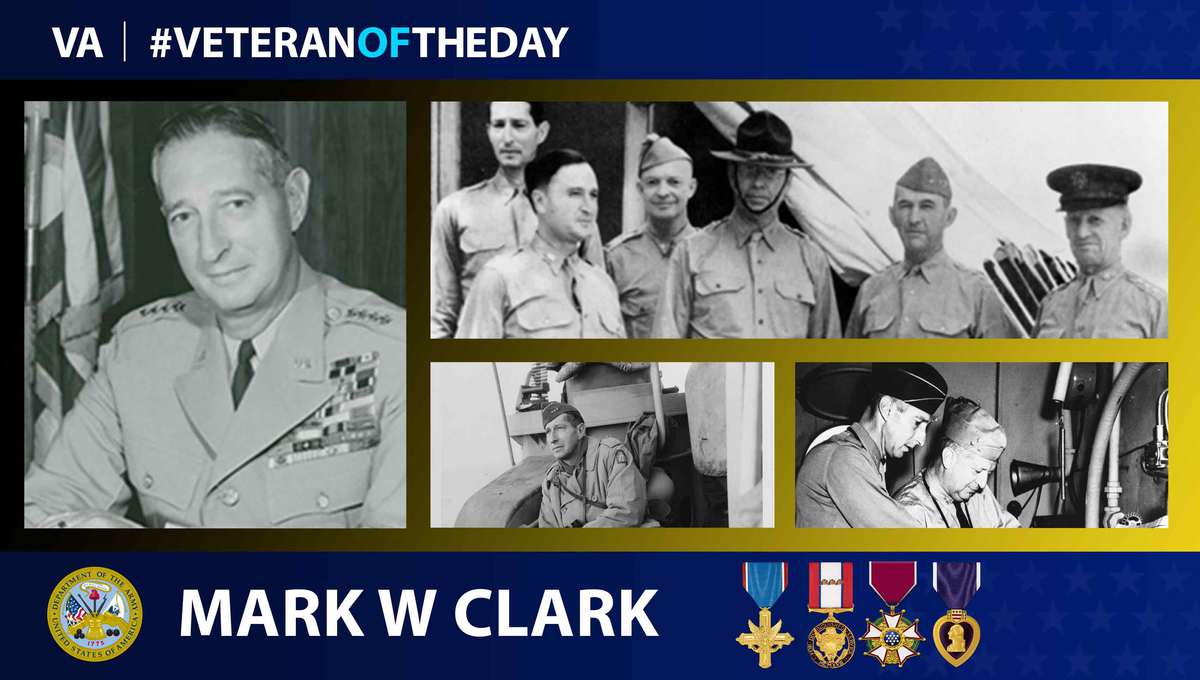 Born in 1896 in Madison Barracks, New York, Mark Clark, a third-generation soldier and the son of a colonel, was destined for service in the military. Growing up in Army camps, Clark attended the United States Military Academy at West Point in 1913. After graduating in 1917, he served in France, where he was wounded, and later in Germany during World War I.

After returning to the U.S. in 1919, Clark served throughout the country. He also attended the Infantry School at Fort Benning, Georgia; the Command and Staff College in Leavenworth, Kansas; and the Army War College in Carlisle, Pennsylvania.

Shortly after the U.S. entered World War II, Clark became the chief of staff of the Army Ground Forces in May 1942 and then served as commander of the American Ground Forces in Europe. Serving as deputy commander in chief of the Allied Forces in North Africa, he played a crucial role in the Allied invasion of North Africa in November 1942. A secret trip he took to Algiers in October led to the French, then hostile to the Americans, agreeing to lessen the strength of their opposition to the invasion. Gen. Eisenhower, crediting Clark for “ensuring that land resistance was not great anywhere,” awarded him the Distinguished Service Medal. He was simultaneously promoted to a three-star general at the age of 46, the youngest in the Army.

Shortly after the invasion, Clark became the commanding general of the Fifth Army in Italy in 1943, when the Americans invaded Salerno, Italy. During the invasion, as German forces led a surprise counterattack, Clark, despite immense personal safety risk, landed on the city shores, taking command and forcing a German retreat. His actions earned him the Distinguished Service Cross.

Leading the Fifth Army, however, Clark led operations that were later criticized for causing an immense loss of life. Nevertheless, in 1946, the War Department defended the general’s actions as “sound,” and the Senate subsequently confirmed his nomination for the permanent rank.

After commanding the Fifth Army, Clark became commander of the 15th Army Group in 1944. Toward the end of World War II, he became chief of the U.S. Occupation Forces in Austria and U.S. high commissioner for Austria. He then served as U.S. deputy secretary of state, chief of Army Field Forces and, finally, as commander of the U.N. Command, a position in which he signed the Korean Armistice Agreement in 1953.

After 36 years of service, Clark retired in October 1953. He then became president of The Citadel, serving for 12 years; afterwards, he was named president emeritus of the college.

Clark died in April 1984. A husband first to Maurine Doran, who died in 1966, and then to Mary Millard Applegate, Clark had a daughter, who died in 1962, and a son, William Clark. He also had five grandchildren at the time of his death.