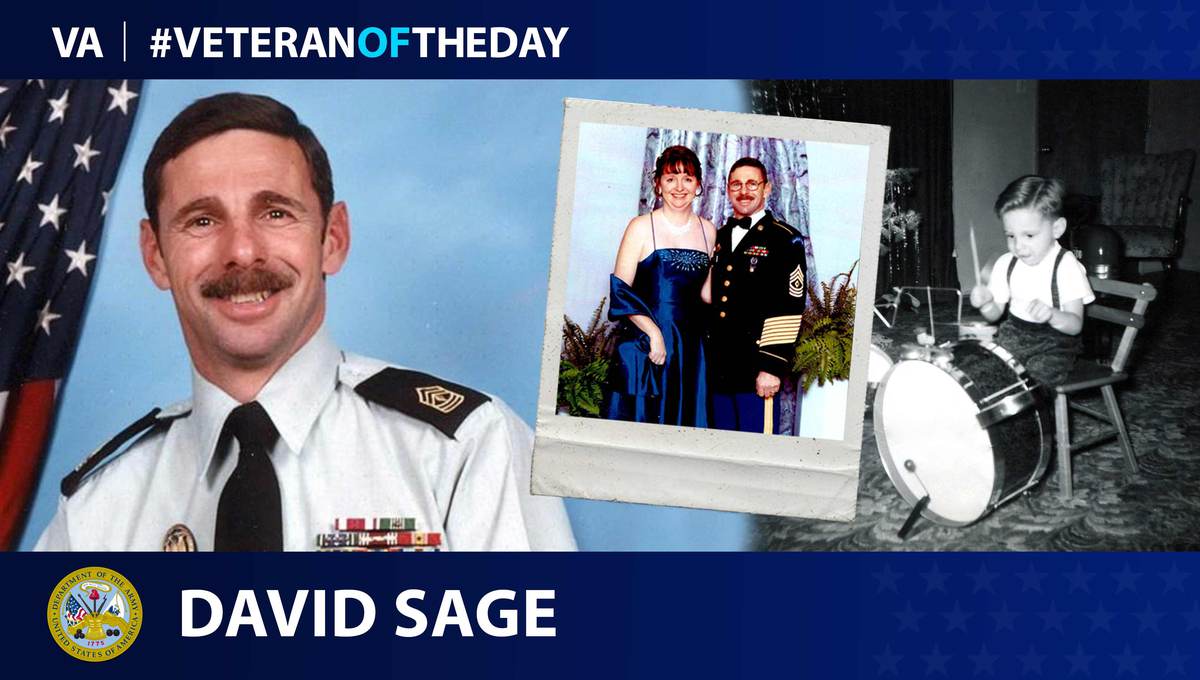 David Sage dedicated his life not only to serving our country, but also to a lifelong passion for music. His love of music began at age seven when he received his first drum set. He was immediately drawn to the instrument and spent the next twelve years taking private lessons in order to learn it. He continued lessons throughout his education, playing in school bands and with the Whittier Elks Cavaliers Youth Band. In his senior year of high school, he received the John Phillips Sousa Award and the Marine Youth Foundation Music Award. While pursuing a degree as a music major at Rio Hondo College in Los Angeles, he was drafted into service for the Vietnam War on Aug. 11, 1972.

Sage began his basic training at Fort Ord, California, until his recruiter noticed his background in percussion and recommended he audition for the Army Band Program. He already had experience playing with large bands, having been a part of the All-Southern California Band, and he therefore accepted the invitation and auditioned for the Army Band.

There, he was promoted to the service’s special band program, where he completed Advanced Individual Training (AIT) at the Army School of Music in Norfolk, Virginia. His wife, Debra, says that David served at Fort McArthur, California; Fort Benjamin Harrison, Indiana; Schofield Barracks, Hawaii; Heidelberg, Germany; and Fort McPherson, Georgia. Throughout his service, he performed mostly in orchestras, marching bands and parades. He would often perform in front of ambassadors, diplomats and even in front of presidents at ceremonies.

Sage loved the variety of music styles and serving in the military allowed him to perform while on tour and in civilian life. One of his fondest memories was playing in the Army Band in Germany at local festivals. When he was performing, he would stand on tables playing Glenn Miller’s music and other swing music to rouse up the crowd. When stationed in Hawaii, he would also play for local bands in Waikiki and helped shape the style of contemporary island music. Everywhere he was stationed, Sage was actively involved in performances in the area. He finished his education the second time he returned to Fort Harrison and finished his degree in Applied Science in 1988.

Sage retired from the Army in August 1996 but continued to serve by teaching at Junior Reserve Officers’ Training Corps (JROTC) and coordinating logistics at the Georgia National Guard’s U.S. Property and Fiscal Office. In October 2017, he retired for the final time. He continued teaching music to individuals of all ages and performing in cover bands and in local groups.

David Sage died in May 2022, surrounded by his wife and family at his Murphy, North Carolina home. He was 69.