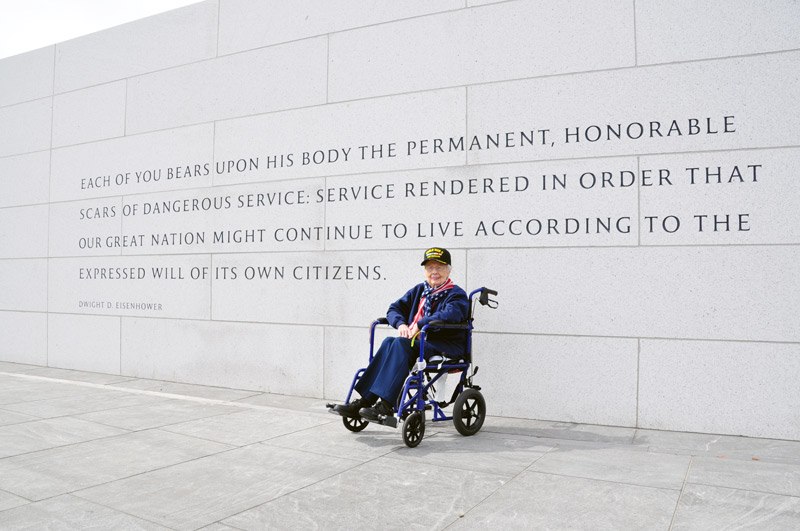 The bus carrying Veterans of past conflicts pulled up alongside the American Veterans Disabled for Life Memorial on Sunday afternoon.  It was the first time a group from the Honor Flight Network had visited the memorial, which had been officially dedicated just a week before.

The group from Austin, Texas, included 20 Veterans of World War II, Korea and Vietnam. Among them was former Army Air Corps nurse Lois Crook. Now 92 years old, Lois was excited to see the new memorial, and have her picture taken in front of a quote from Dwight Eisenhower.

“I took care of them, that’s why I want to see this” Lois told me, not only during the war, but after, as a nurse at her local VA.

But Lois’ story of service is also one of sacrifice. While serving in the Army Air Corps, Lois met and later married Clyde Jones, a pilot.  A 1st Lieutenant at the time, Clyde was killed when his F-84E Thunderjet collided with another plane during a training flight in 1953.

Leslie Jones, Clyde and Lois’ daughter, was four when her father died:  “He was only 29 years old when he flew that day, February 6, 1953. We were living in England and he was stationed at Manston AFB. He had orders for Korea in three days. I have a letter he mailed that day to his family in which he said, ‘I don’t mind going, it’s just that I hate to leave Lois and Leslie for so long.’”

So on Sunday, the Honor Flight Austin moved on from the new memorial to make another stop:  Arlington National Cemetery.  The group witnessed the changing of the guard at the Tomb of the Unknown Soldier.

But it was another stop that had special meaning to the lone female Veteran on this flight.  Lois and her fellow Veterans paid their respects graveside to Clyde Ray Jones Jr., an experience the Honor Flight staff described as “humbling.”

Lois Crook, Army Air Corps nurse, is a charter member of the Women in Military Service for America Memorial, which is located at Arlington National Cemetery. We honor her service and sacrifice.