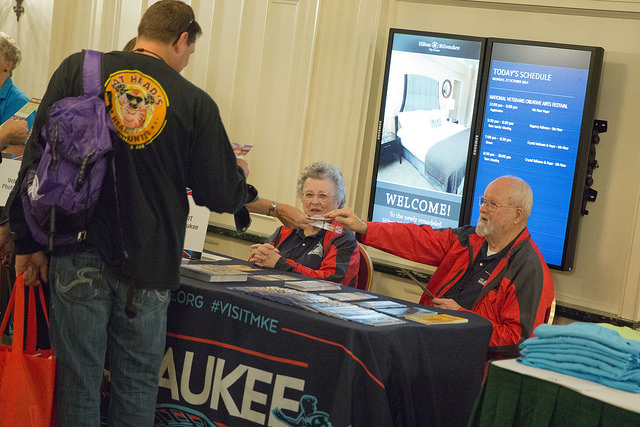 More than 100 Veterans from across the country are in Milwaukee today through Sunday for the 2014 National Veterans Creative Arts Festival.

Robert Cooper, from Martinsburg, W.Va., tunes a folk harp for a rehearsal which culminates with on Sunday  with a stage performance at Milwaukee Theater.

The Festival, presented by VA and the American Legion Auxiliary, showcases the artistic achievements of Veterans from across the country who placed first in national art, music, dance, drama and creative writing division competitions. The Veterans will participate in workshops, rehearsals and artistic interaction sessions, culminating in an art exhibit and stage show performance, open to the public.

Among many other therapeutic benefits, the Festival encourages artistic expression to help Veterans dealing with PTSD and other psychological issues.  More than 3,500 Veterans participated  in regional competitions which culminate in the annual national event.

This year, the Clement J. Zablocki VA Medical Center hosts the event which will feature the gold medal-winning entries from 53 categories of art, ranging from oil painting to leatherwork to fiber art in an exhibit at the Grand Rotunda of the Milwaukee Theatre on Sunday, November 2 from noon to 2 p.m. The stage show performance will begin at 2 p.m. on Sunday, November 2, at the Milwaukee Theatre. Tickets are free but must be reserved by contacting 414-389-4099.

For more coverage of the Creative Arts Festiva visit www.creativeartsfestival.va.gov.